Yesterday was a long 24 hours !

Our car arrived to take us to Heathrow at 4am. The two hour drive down passed without problem and the check in process went so smoothly that we found ourselves with 3 plus hours to waste away in Terminal 3. That was mainly spent eating a nice, but expensive breakfast in a french “restaurant” that had a French accented waiter who seemed to slip into an Essex drawl when he lowered his guard and browsing Gucci and other assorted expensive shops 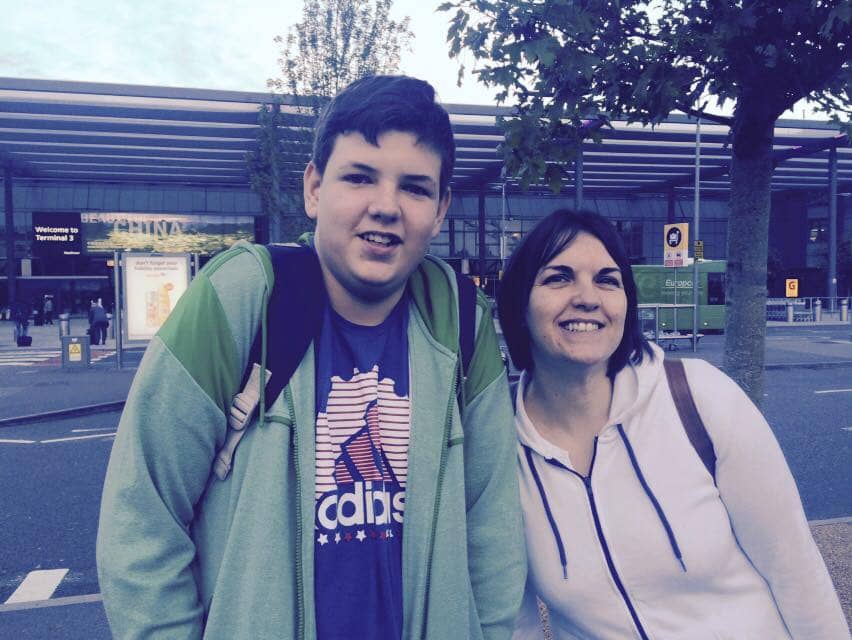 by 9:15 we were on the plane and our decision to upgrade to premium economy was justified. The Virgin staff were excellent, welcoming us on to the flight with newspapers and sparkling wine and within 20 minutes of being airborne they were bringing round more drinks and snacks. Dinner seemed nicer than then the normal slop you get served up but i’m not sure if that was due to having real cutlery and crockery or if it was actually better than what was served in cattle class. There was a good assortment of films and TV to watch and after me and my son chortled our way through an episode of House Of Fools i settled down to watch Kingsman: The Secret Service which id missed at the cinema but really fancied. Its a very good film and definitely one i’ll re watch on a bigger screen when home. The 8 hours in the air flew by (excuse the pun) and it wasn’t too long before we were touching down at O’Hare airport in Chicago and joining the misery of American immigration queues. 45 minutes to get through immigration but the baggage was on the carousel as we got there so wasn’t too long before a taxi took us to the centre of Chicago and our first stop the Talbott Hotel 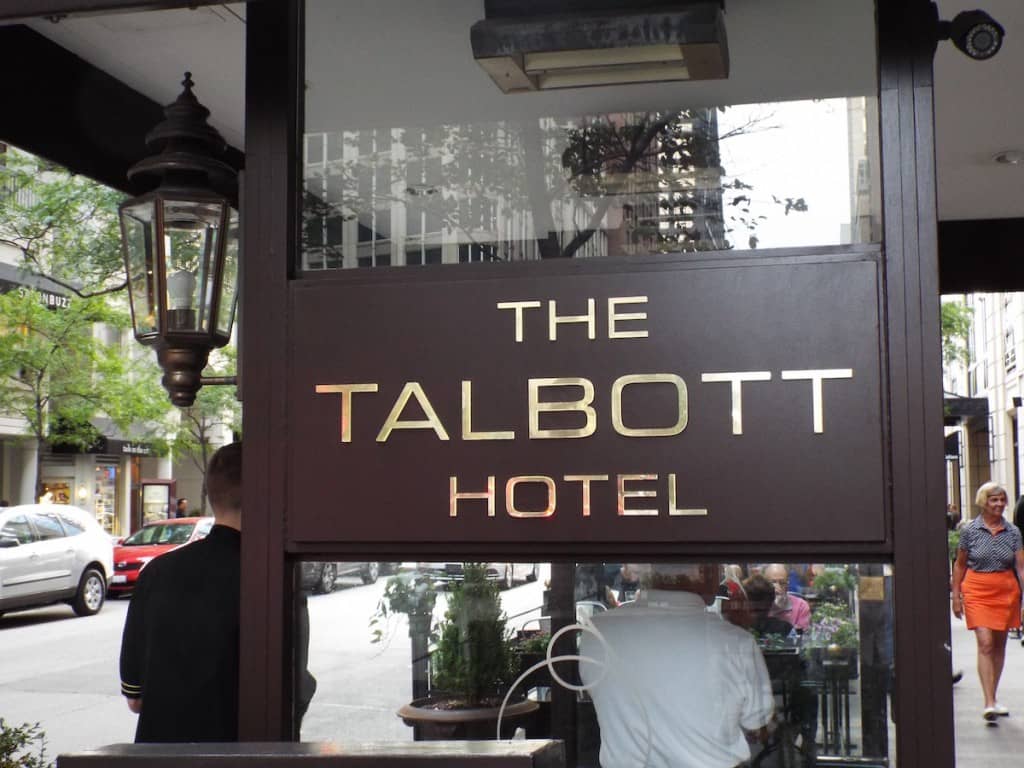 After a quick freshen up at the hotel we headed out onto Chicago’s streets to see what we could find. The area we are in ( East Deleware street) seems nice enough, lots of decent shops (including an Adidas Originals store where i bought my first pair of trainers of the trip) and nice restaurants. IN fact, going back to theAdidas store for a minute i must give a huge shout out to the sales assistant there. On noticing the Consortium Superstars i was wearing he passed comment which sparked up a log conversation on adidas, sneakers and the whole “collecting” game. We exchanged instagram accounts, he showed me a few pairs that were due out soon but not released yet and i left with the guy sticking his staff discount on what id bought ! Result. So if your ever in Chicago, check out the originals store – they really are a great bunch in there. 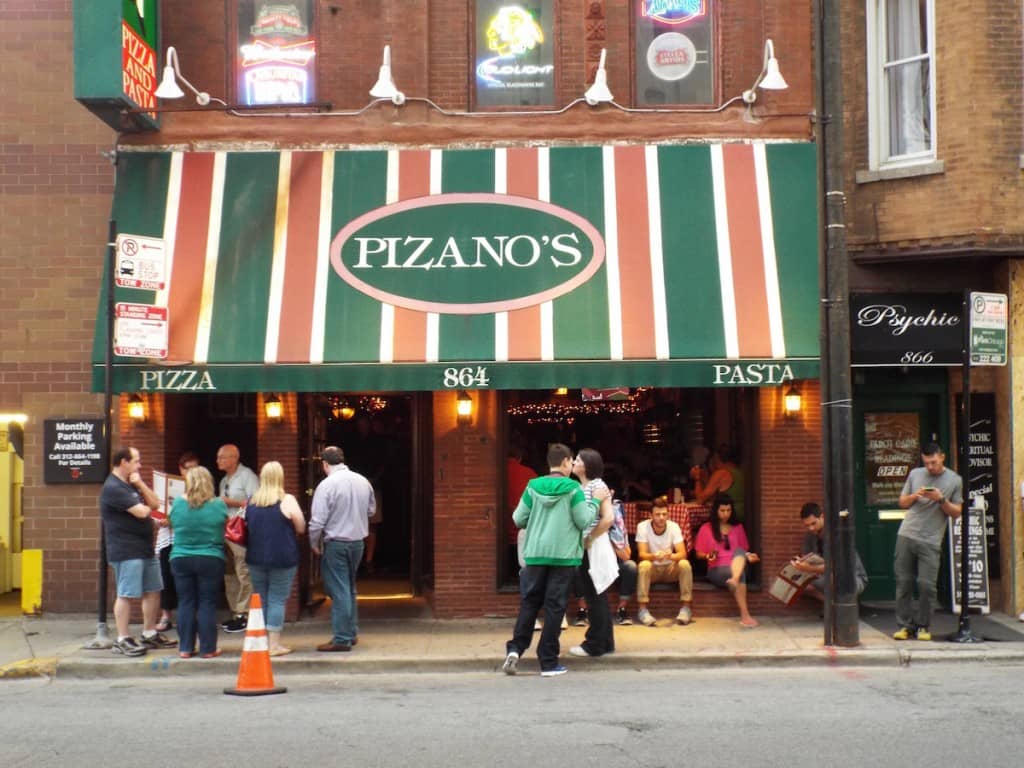 For dinner we headed for the apparently world famous Giordanos pizza place but it was packed solid with an hours wait for a table and if i’m honest looked and felt very much like a chain restaurant so we knocked that idea on the head. We remembered seeing a small pizzeria near the hotel so we went off to find that. It was just as packed but there was only a 20 minute wait for a table and it had a genuine vibe about it so we waited. 20 minutes later we were sat in the back room which was decorated with hundreds of photos of baseball, football and basketballs players who i had never heard of and badly painted food items. The table was on a slope next to the kitchen and there were staff buzzing around constantly but it seemed like such a genuine place, the kind the locals would eat at. We ordered deep fried Mozzarella and ravioli to start with along with a pasta dish, a caesar salad and a medium deep dish pizza for mains. The starters arrived quickly and were delicious and it wasn’t too long until the pizza and pasta were out, and BOY, what a pizza it was ! Had we ordered it in the UK it would of been sized as super super extra large, the thing was massive. The pasta and Caesar salad were the same. Americans really do like BIG portions. Everything tasted fantastic, the deep dish pizza was crammed full of cheeee and filling and was a real experience. our waitress found it hilarious when we explained the difference in portion size back home and got to say i felt quite ashamed to of had to waste so much but it was verging on the impossible to force anymore down our mouth so we eventually had to make our excuses and leave a sizeable amount to go in the bin. By the way the restaurant was Pizanos and i would heartily recommend it as a very good alternative to the more advertised ones in Chicago. 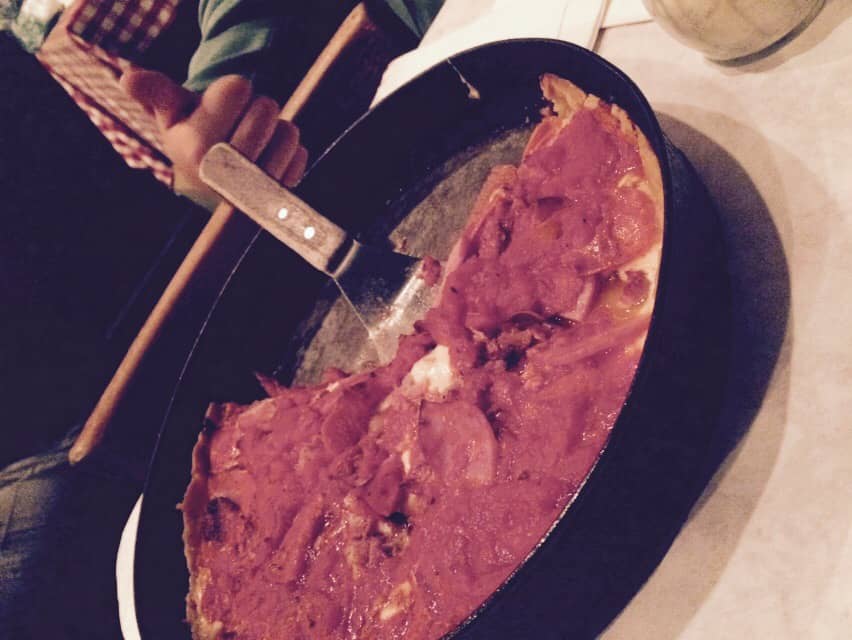 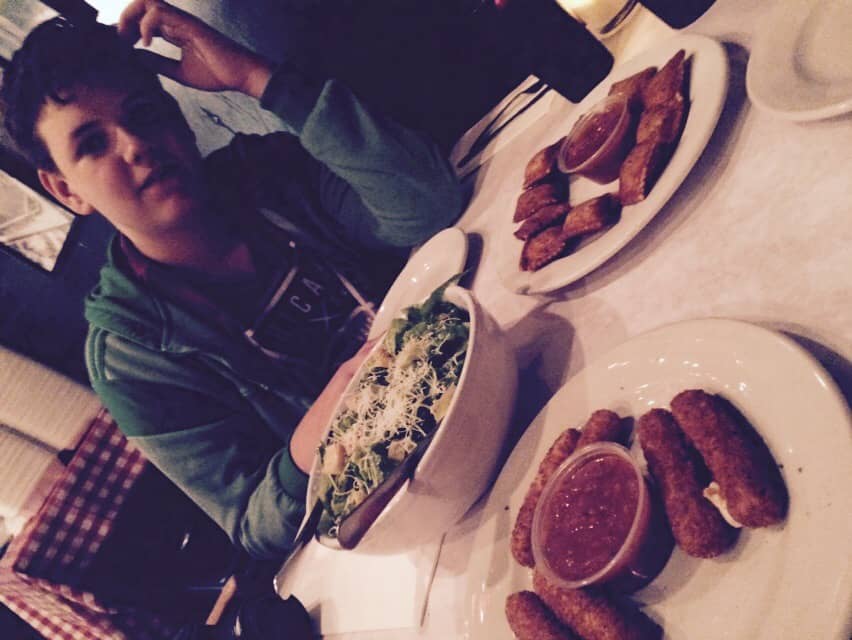 by 21:30 we were back in the hotel. We had done over 24 hours by that point with very little sleep and the huge Queen bed in the Talbott was very welcoming, in fact i think i was out cold before my head hit the pillow.

Today we’ve had a great day doing the touristy things in Chicago but ill tell you about those later on as its late again and tomorrow the real adventure starts when we head back to the airport to pick up the hire car and start our Road Trip across Route 66.