Oklahoma to Amarillo and the best steak in Texas

It would appear that i can now answer Tony Christies question, YES, i do know the way to Amarillo. Now thats out of the way i can get on with todays blog post about the journey along Americas Mother Road from Oklahoma City to Amarillo in Texas I think we missed a lot of old 66 on the way out of Oklahoma but i was more concerned with finding fuel and a Best Buy or similar in order to buy more storage for my GoPro. Once that had all been sorted we made our way to Yukon to pick up Route 66 again. Didnt seem a lot in Yukon other than a huge flour mill as you drive through. 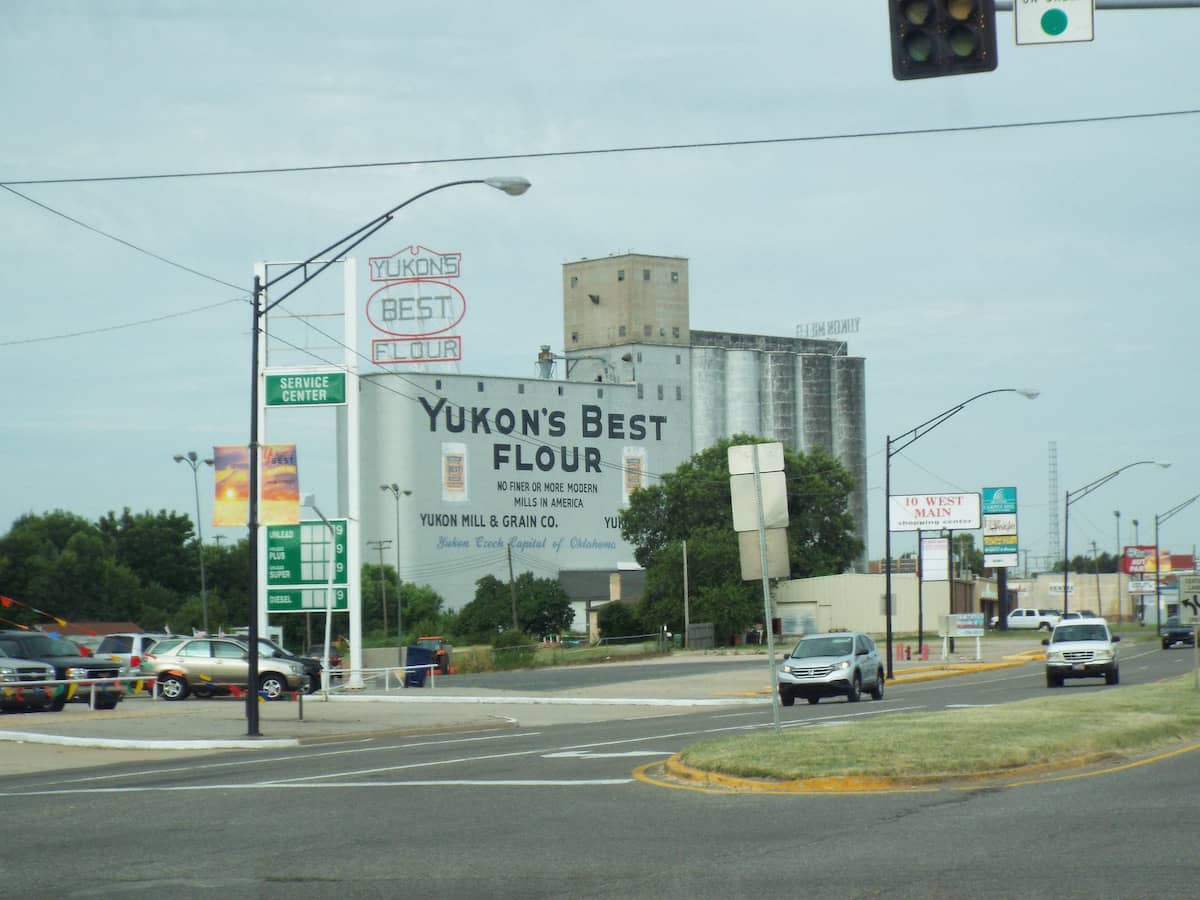 We took a slight detour off an visited Fort Reno, which was more of a grand house than a fort – I was expecting a wooden fort from the civil war but it looked more like a Spanish colonial house. Nevertheless a nice little drive of the highway for ten mins. 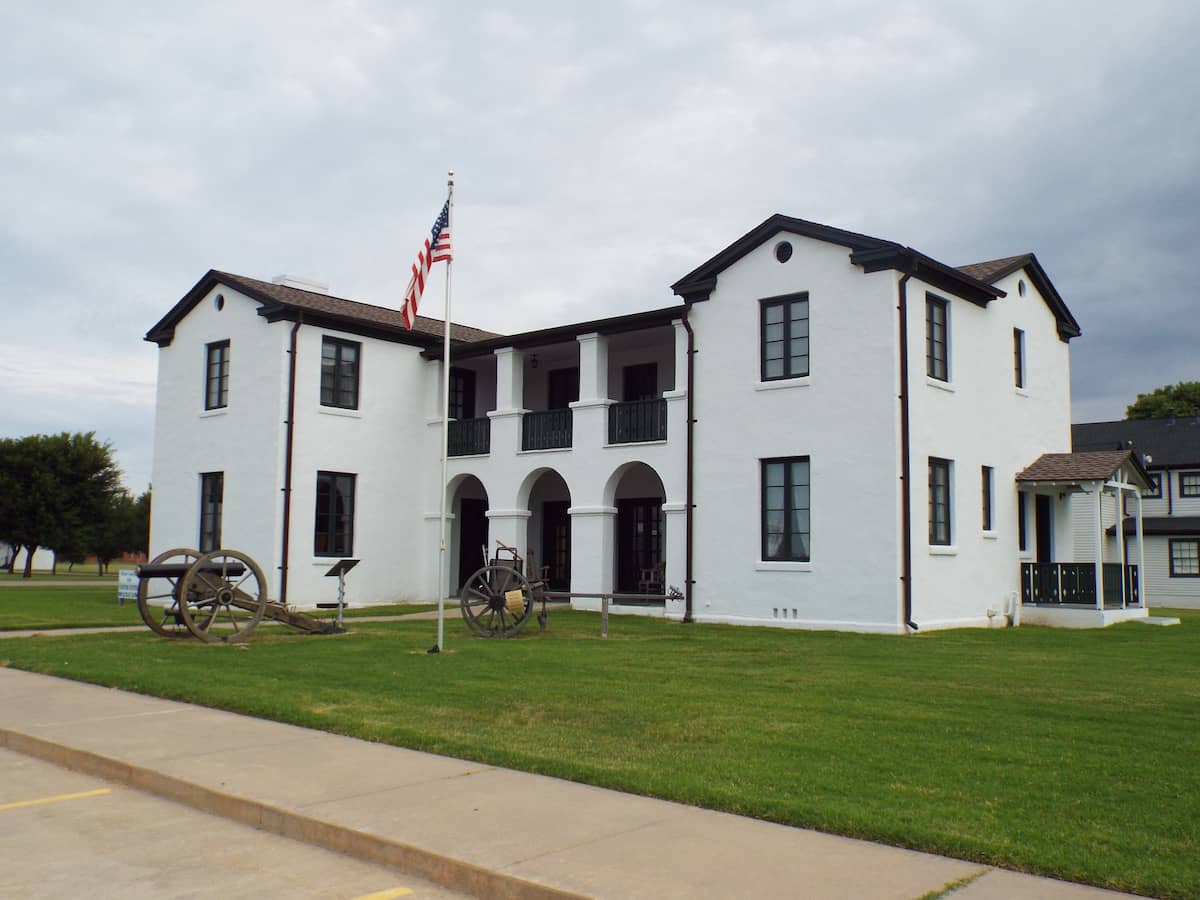 Oklahoma started with lots of nice old Route 66 roads and bridges. Stopped at The original Lucilles service station but it looked like a big storm was heading in with dark clouds looking oddly funnelly in places so quickly headed into Lucilles roadhouse at the interstate junction for a bite to eat and coffee.

Old 66 soon opened out into a dual carriage way and we eventually got to Elk city where we visited the National Route 66 museum. Interesting 66 exhibitions and a few old cars coupled with lots of Oklahoma based historical exhibits such as old school houses, original diner, old train caboose etc. it was a worthwhile stop for $5 each and when we came out the rain had stopped and it was looking sunnier in the distance. 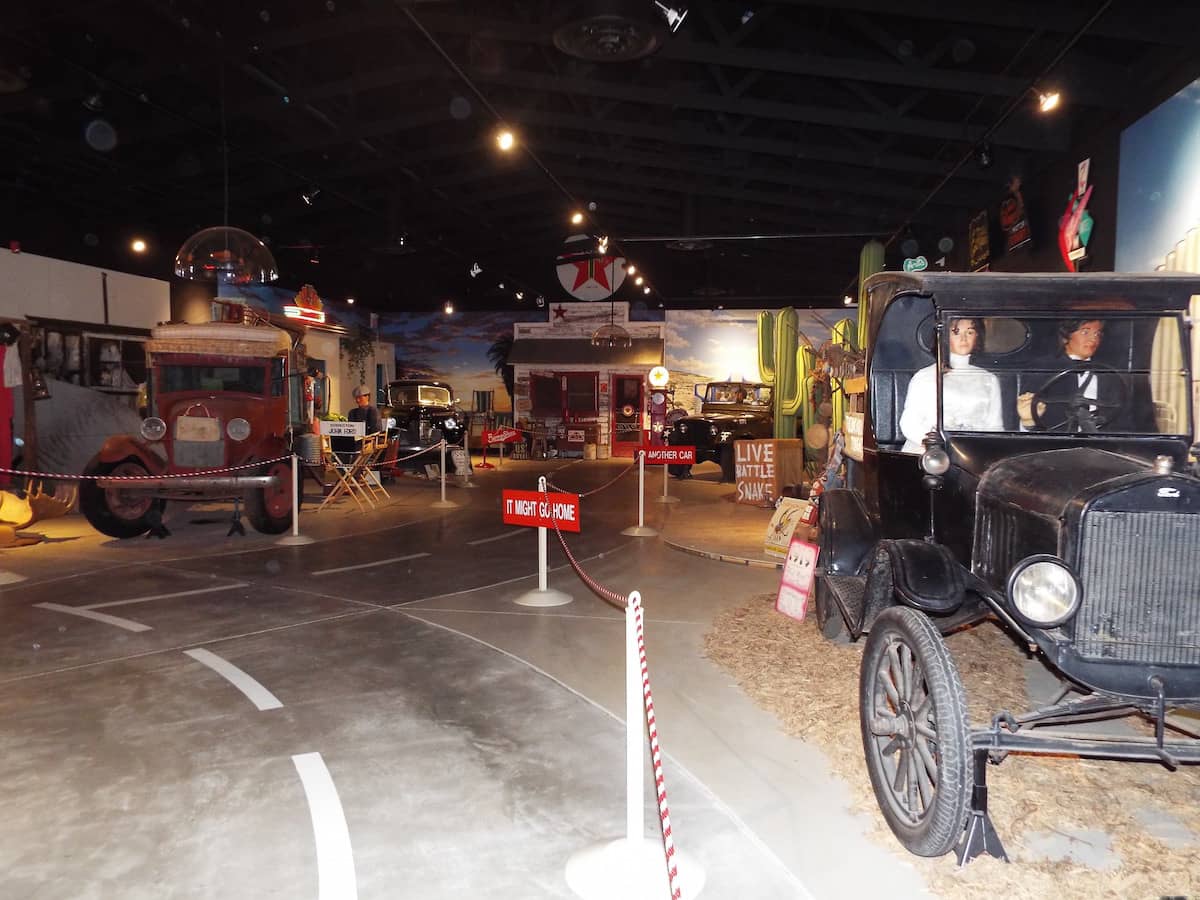 Drove through Erick and Texola and over the Texas border line in to the lone star state .
Scenery change was very sudden and whilst Oklahoma is very Britain like in its countryside appearance with rolling fields and trees Texas opened out into huge expanses of rolling field with notably less trees. There were many areas where you felt like the whole world was right their in front of you the expanse was so great. 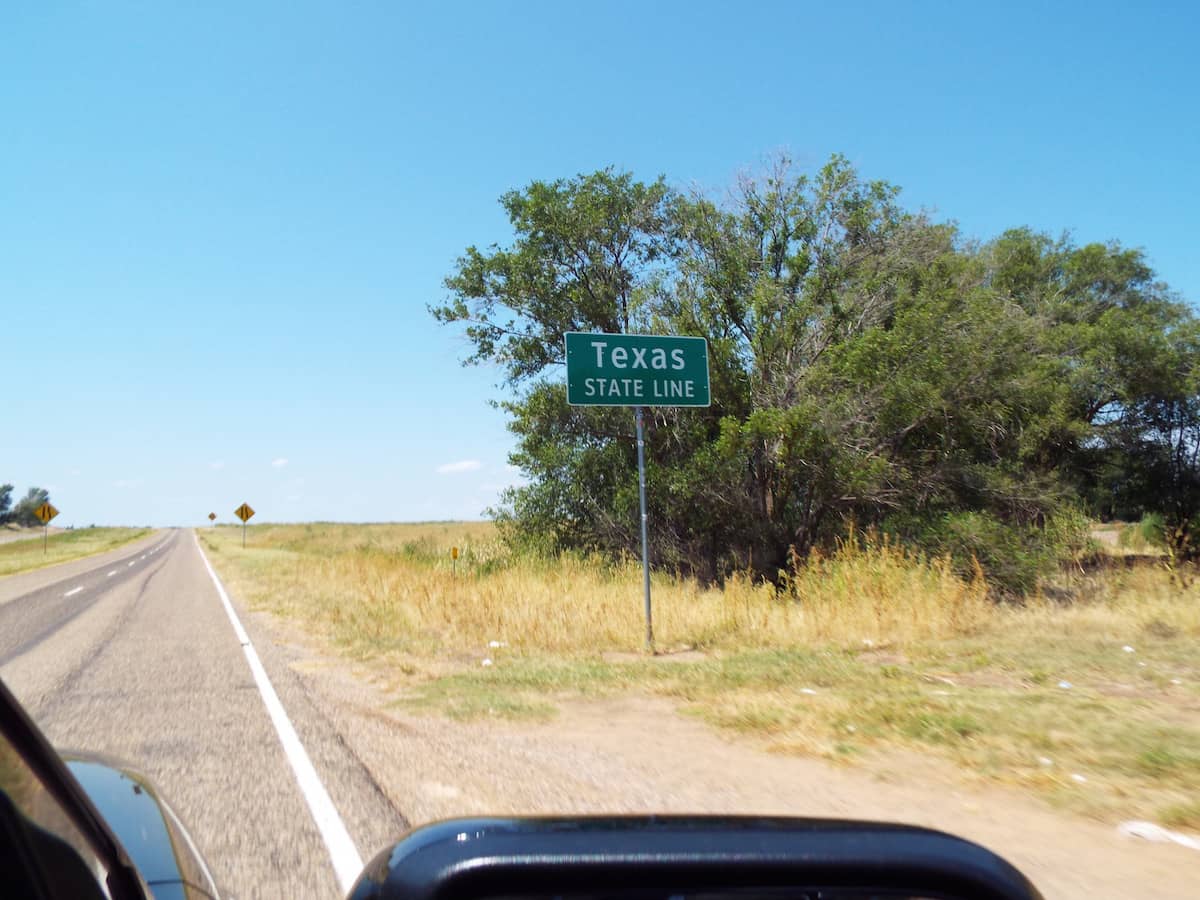 First stop was Shamrock to visit the U Drop Inn which formed the inspiration for Ramones bodyshop in the film Cars. It’s almost identical in the film as it is in real life. Spoke with Diane from the chamber of commerce who was very welcoming, enthusiastic and knowledgable. It was a great first stop in Texas offering free coffee to hot passers by and worth a stop.
Had a chat with the owner of the western motel across the road from the U Drop and turned out he had married a girl from Leicester – small world and all that. 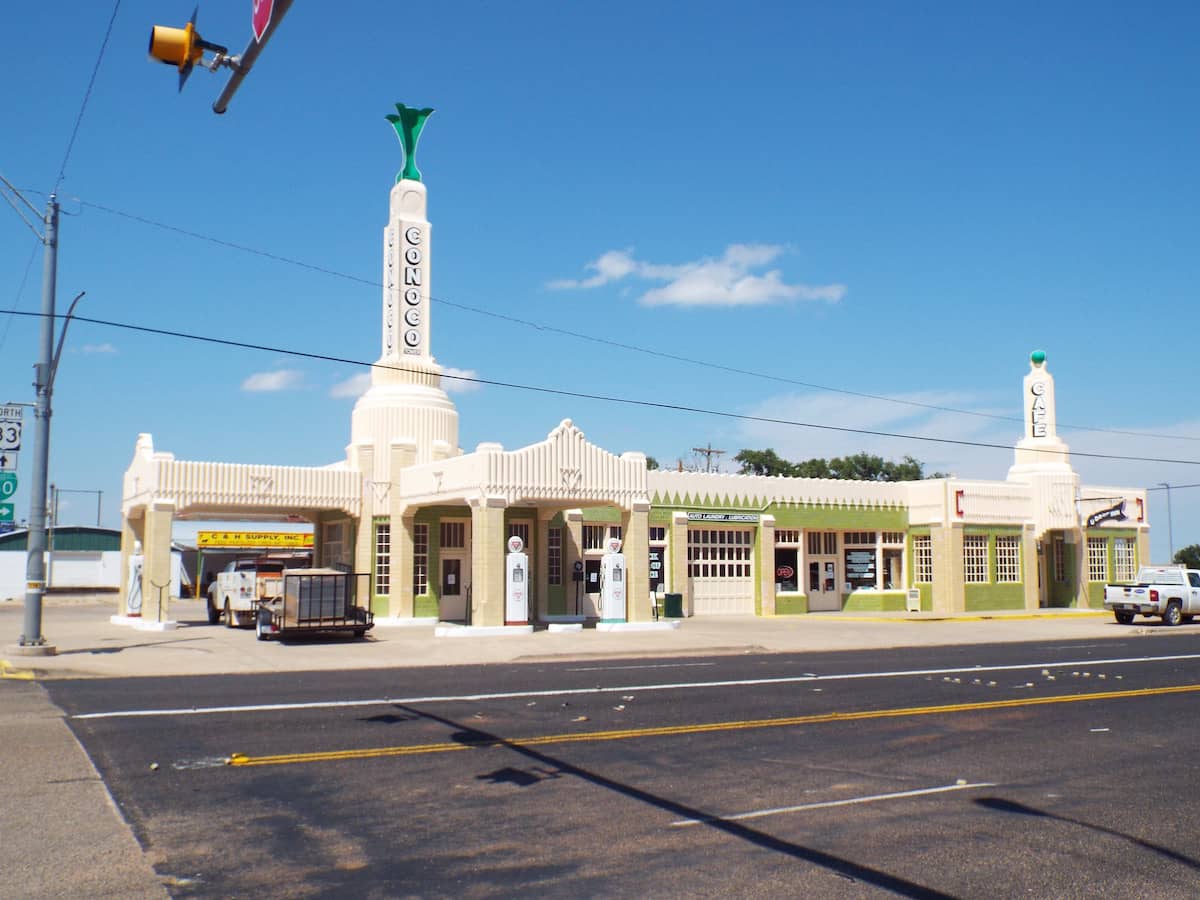 Next real stop of note was Groom to take a picture of the leaning tower of groom – which is a leaning water tower which i think may also of been the inspiration for something  in cars and the largest cross in the Western Hemisphere at 190 ft tall. It was then a further 40 miles or so into Amarillo and too our destination.
The big Texan in Amarillo is like a small Disney version of a Texan cowboy town. The motel rooms are behind brightly coloured facades emblazoned with County Jail or Saloon etc and across the car park is the home of the world famous Amarillo 72oz steak challenge – essentially eat 4.5lb of steak, baked potatoes, salad, shrimp cocktail, bread roll, Coleslaw etc. Eat it all within an hour and get a t shirt and your picture on the wall of fame oh and get your dinner for free ( but obviously not the digestive medicine you would need the following day). 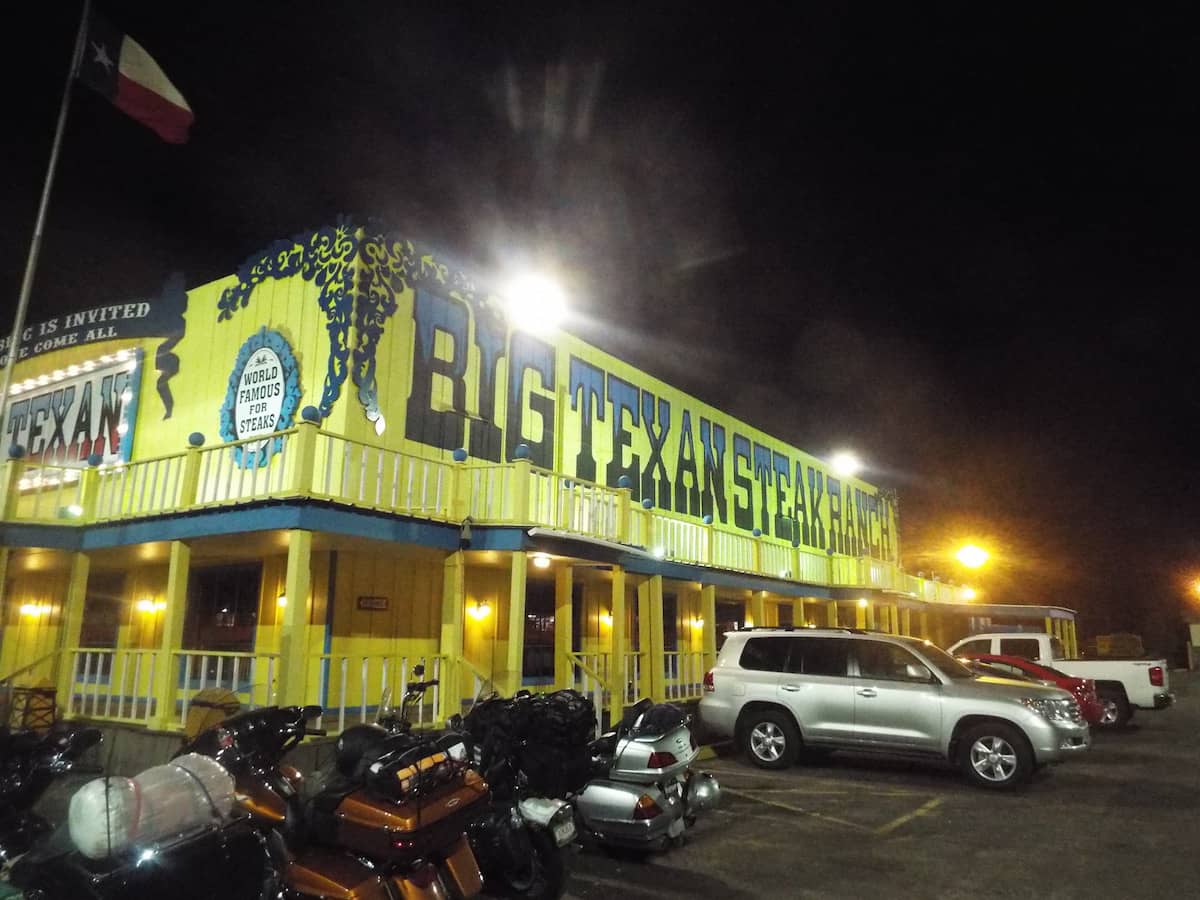 We ate dinner there that night and it was an experience. The place was packed to the rafters, and the rafters housed various heads ranging from bears, moose and bison to cows and deer and just about every other animal you can think of. Dinner was good old fashioned Texan Amarillo steak. Me and Oz both had an 8 Oz sirloin which was cooked to perfection and probably the best bit of steak I’ve eaten In my life. Deb, being a vegetarian struggled !! She ended up eating a bunch of side orders. The beer was pretty good too. All brewed on site I sampled a 7.2% Rattlesnake Ipa which was very nice, a 5.75% Honey Blonde Lager ( the nicest). A 9.1% whoop your donkey which I imagine is what moonshine tasted like, a nice gentle 4% pecan porter ( too nutty) and a 5.73% raspberry wheat – nice but a little too sickly. Needless to say I slept well that night ! Highlight of dinner was having my request of Folsom Prison Blues sang by the country band who were touring the tables with a guitar, violin and double bass.