Carthage to Oklahoma via Kansas

]The day began with breakfast in the local pancake hut which was occupied by a couple of camouflage wearing hicks who were obviously on there way out hunting ( huge camo 4×4 in car park) and a bunch of old timers who left in various Vintage American cars and pickups and an Indian motorbike. After Breakfast it was off to Red Oak II, home of artist Lowell Davies. 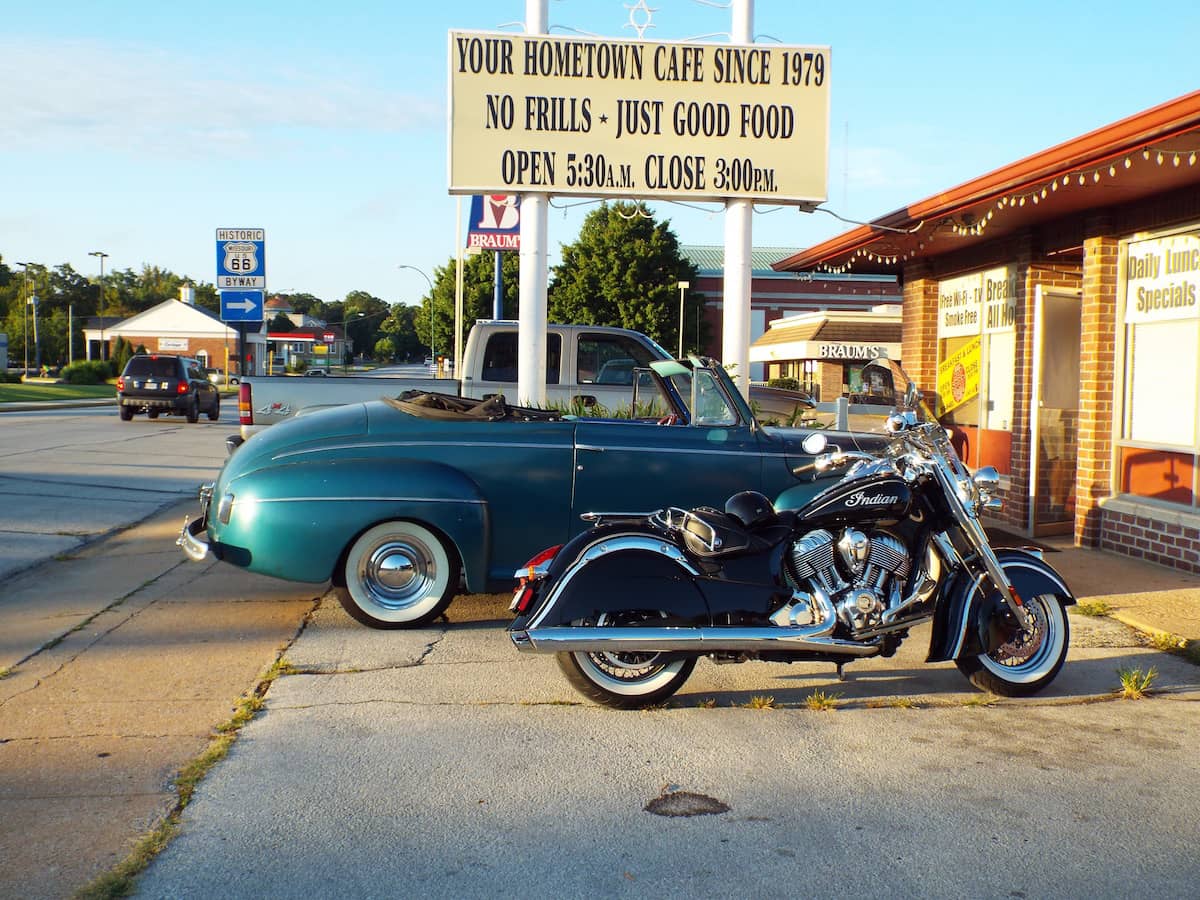 you can view my gallery from Red Oak II here – essentially artist Lowell Davies purchased a huge Cornfield 18 miles away from where he lived as a child and started buying up houses from the original Red Oak and various other ghost towns and moving them to his cornfield. Very interesting, great photos but as with a lot of things on this road trip it was also slightly odd. 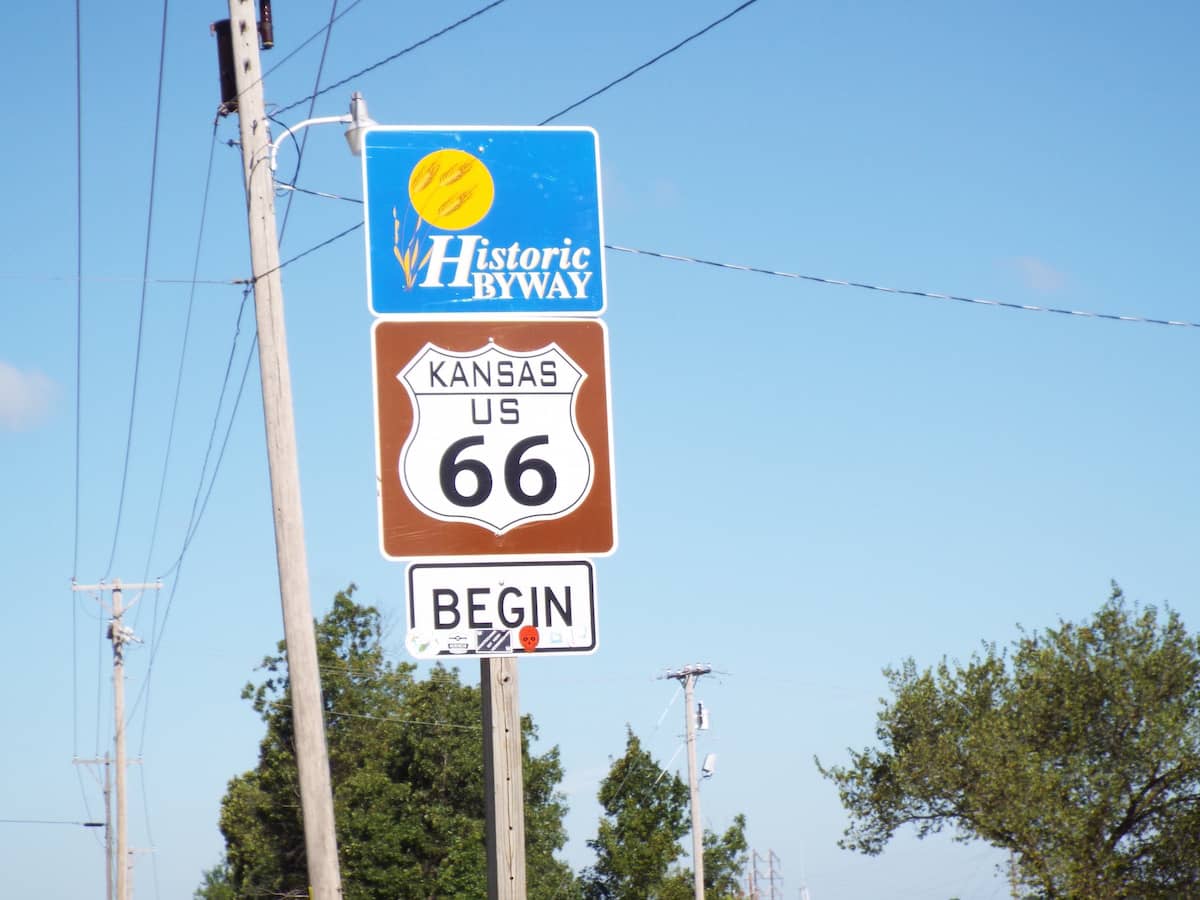 From there it was drive out of Carthage past the Route 66 drive in cinema and through what appeared like quite a run down Joplin and the last few miles of Missouri and over the state line into Kansas.

Kansas only takes up 13 miles of Route 66 but its a packed 13 miles. First stop was Cars on the Road. To cut a long story short (which ill post more of later no doubt) when the creators of Cars the Movie were driving Route 66 looking for inspiration the spotted a bust up pickup truck on a garage forecourt and this became Tow Mater, across the road is a set of garages with a ghost mural on the side ( ie old advertising thats all but faded away), this is also in the film and the actual service station was used as a location also. We sent a good 45 minutes here talking to Mel “The Mouth” Rigg who delighted in telling us all about the history of the building and showing us old pictures of when they first got hold if it. After the disappointment of Munger Moss yesterday this really refreshed my vigour for the route and we left Cars on the Route with big smiles on our faces. 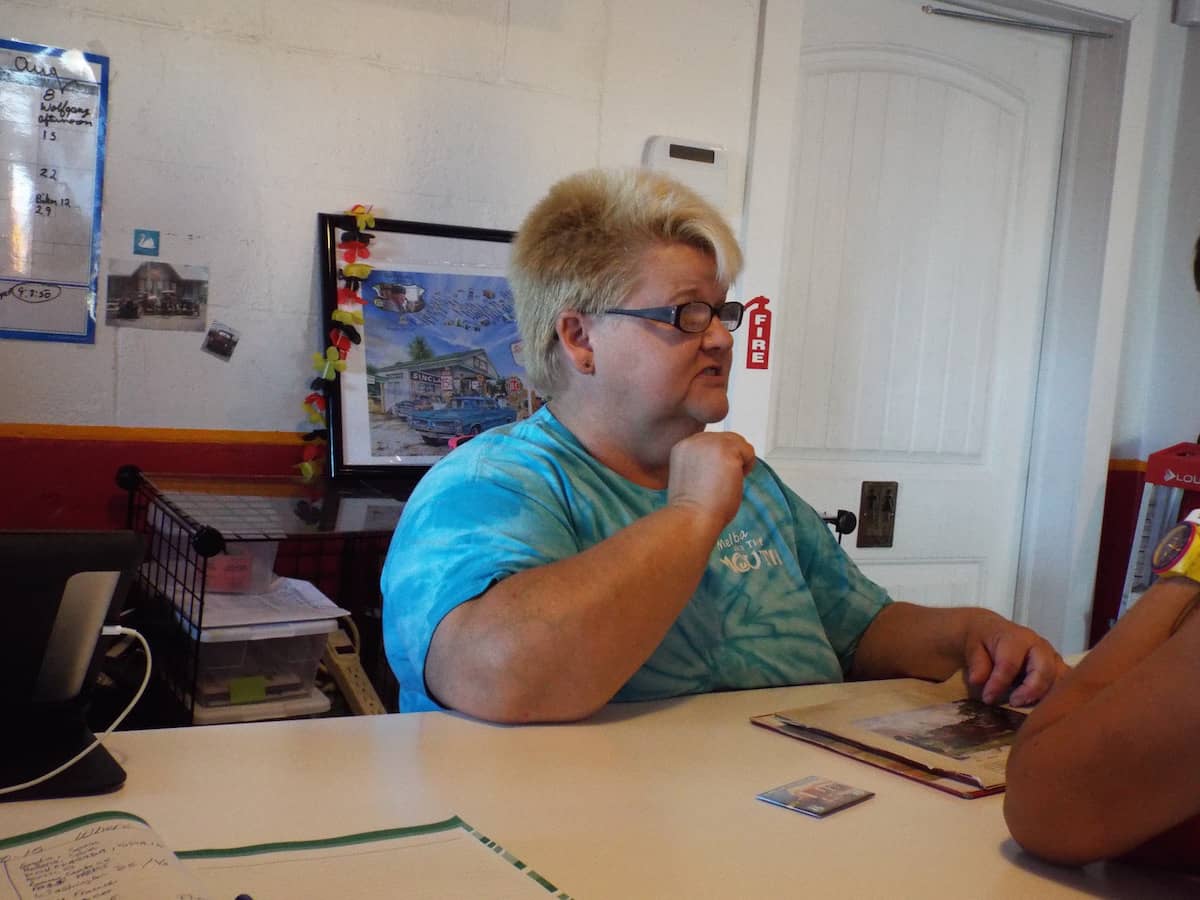 We stopped briefly in Galena for a few photographs and to buy some new batteries in the local hardware store. From what we saw it looks a real nice town, Country music playing in the streets, freindly locals and sunshine. It was back on the road and through some lovely countryside over the Rainbow Curve Bridge just outside Baxter Springs. According to the sign which stood next to the bridge it was the only remaining Marsh bridge on the route.

Baxter springs looked a little run down in places but we didn’t stop so cant really comment fully and after that it was out of Kansas and over the next state line of the day into Oklahoma. 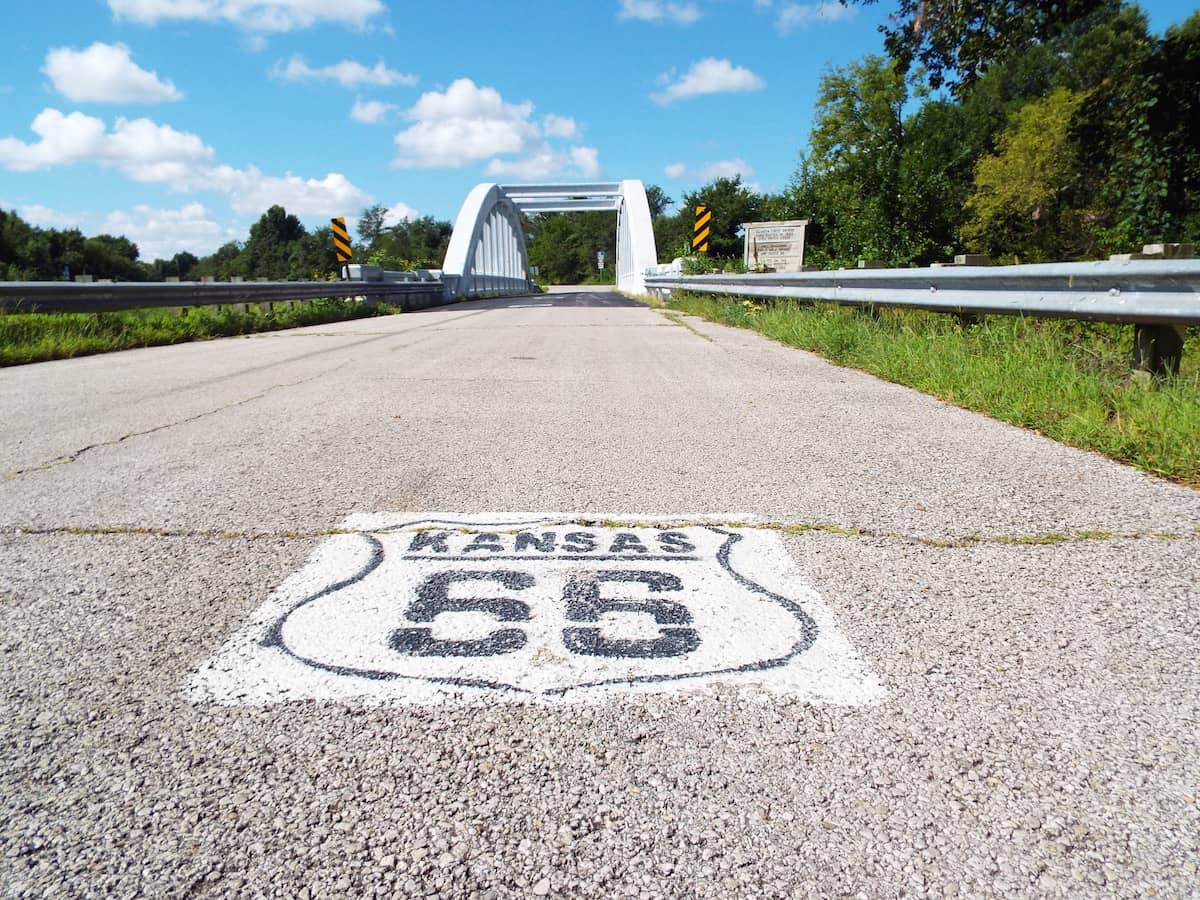 In Commerce we stopped to take photographs of the Dairy King ice cream shop and the old Conoco filling station built Into a brick wall. 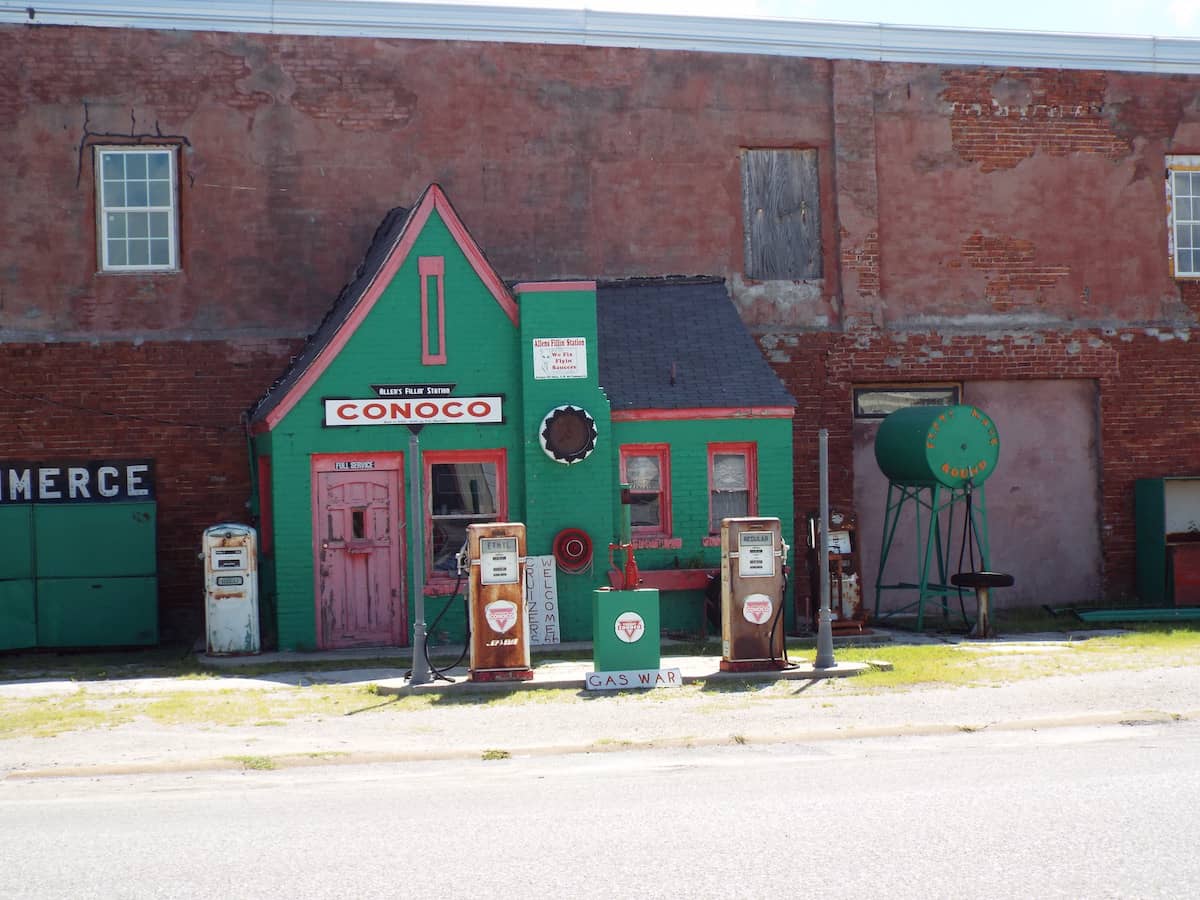 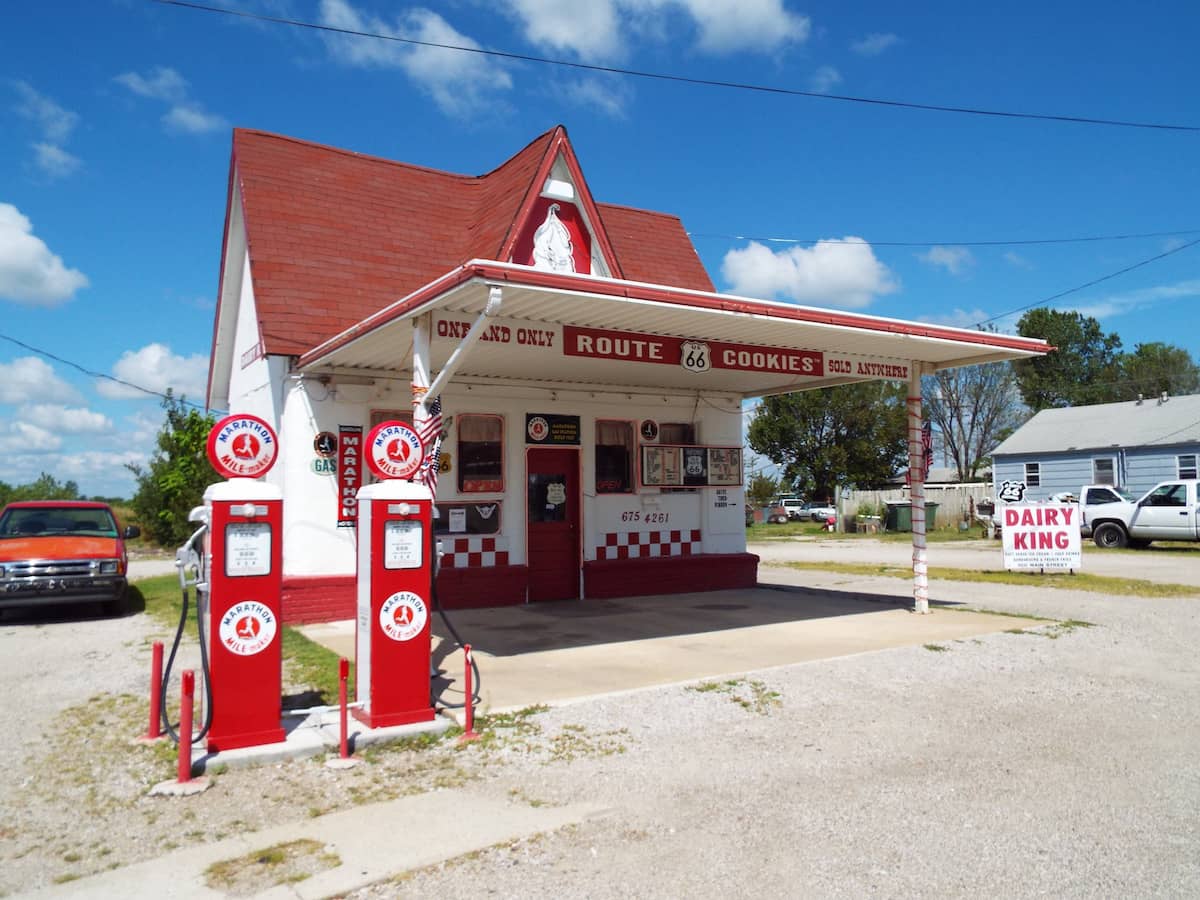 ]Lunch was had in Miami Oklahoma at  Waylans Ku Ku Burger. Its the only one remaining of a once nationwide chain and felt like a step back into the 1950s with its unique building and neon sign on a boulevard of chain restaurants and shops. I Had fried yellow squash and my first corn dog and a huge cherry milkshake – tasty 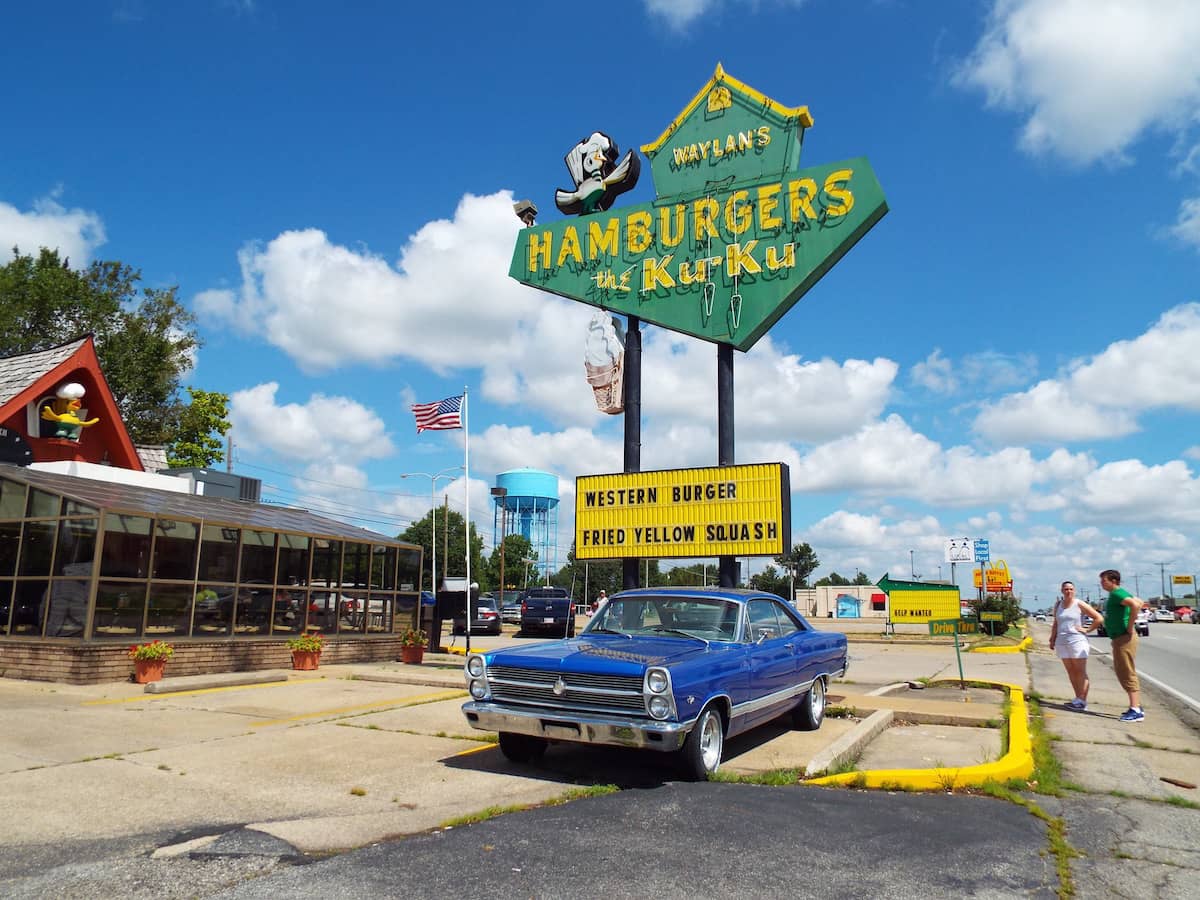 From Miami we headed onto a 1922, 15 mile stretch of unpaved route 66 to Afton. It was at this point i finally realised a big 4×4 made more sense than a Mustang as its the only remaining 9 ft wide pavement on the route taken out of service in 1937 and is a little bumpy and dusty to say the least.

I was looking forward to Afton and visiting the Afton Station but at 14:00 on a Tuesday afternoon the filling station and classic car museum was closed – real downer. This was one of the first things on my must do list when we started planning. 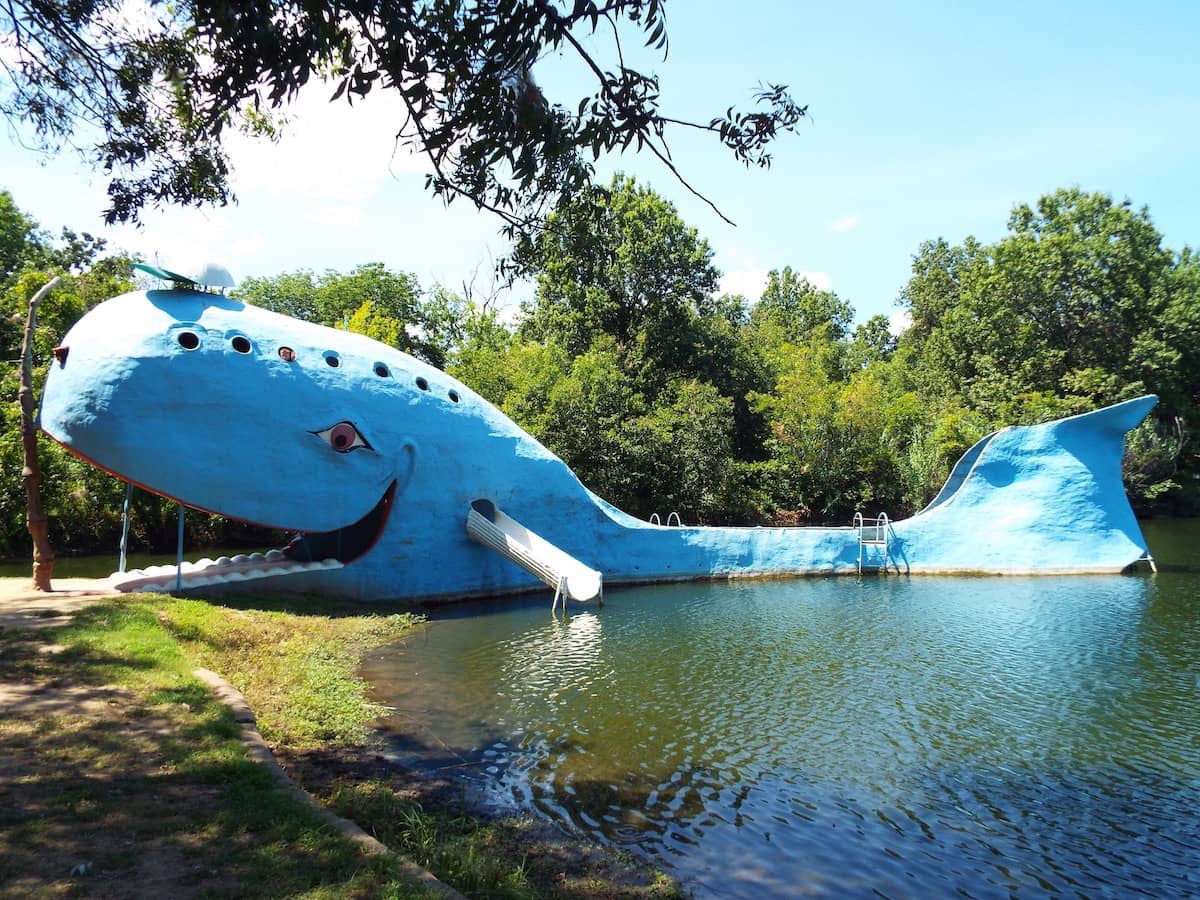 Today we also visited world largest totem pole – cool but odd. and the Cartoosa whale. A giant blue whale slide into a lake. Built as an anniversary present for the creators wife. Again, cool but odd and very typically American. Worth a stop though as its not very day you see a huge blue whale so far from the coast. 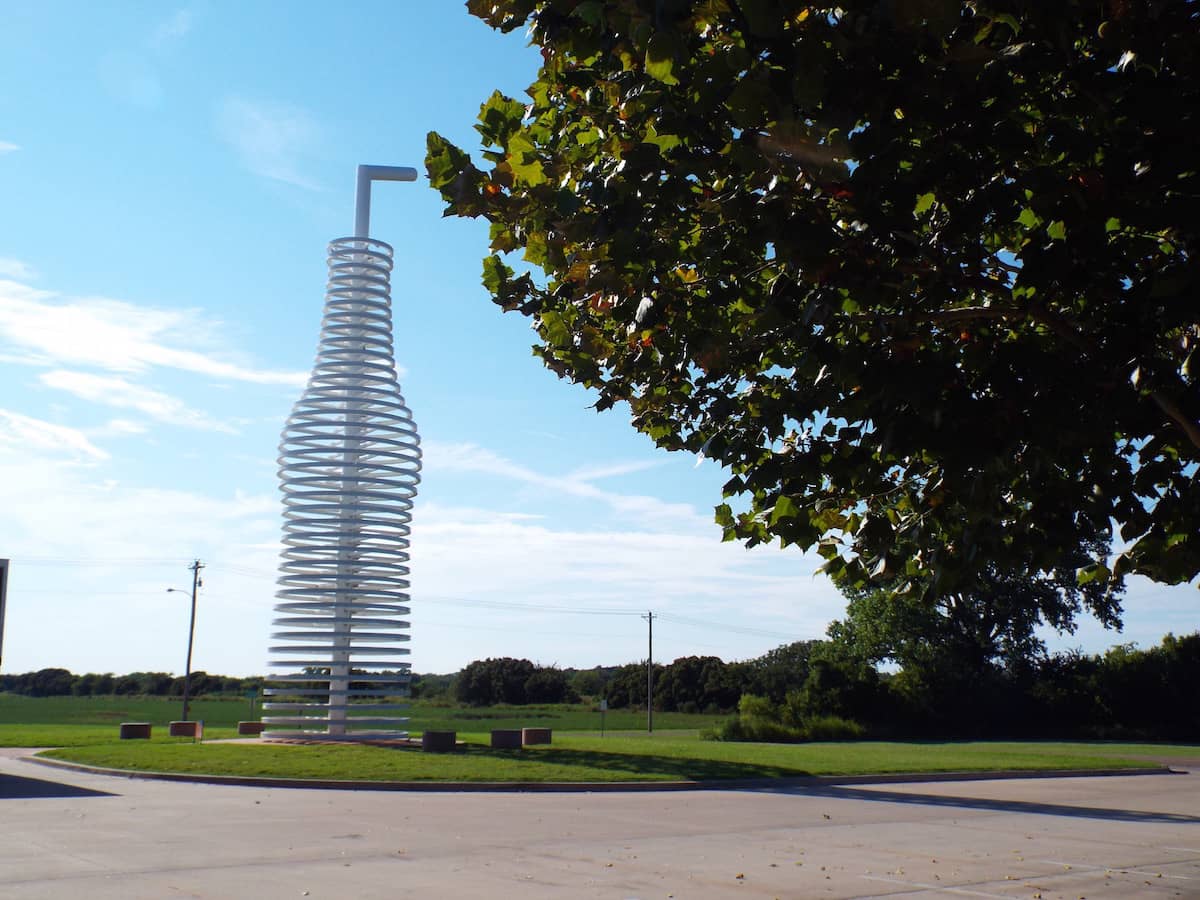 We drove through Tulsa and then through more old route66 past abandoned buildings, motels and businesses eventually onto Arcadia and Pops service station and soda store. Essentially a Mecca to any kind of soda – you can get any flavour you want from bacon and maple syrup to sweet corn to several different varieties of cola and root beer. Oz chose his 6 and we left with a few pin badges and magnets for his collection.
From there it was a straightforward drive to the Colcord Hotel in Oklahoma. Its a beautiful hotel, leather lined walls and marble everywhere. Great room, excellent staff, very helpful valets etc. We ate dinner in their restaurant, quite posh, a little pretentious but very tasty and not too pricey considering the setting. We had plans to go to brick town and visit the Oklahoma memorial but we were just too knackered so it was an early night in readiness for long drive tomorrow.

2 Comments on “Carthage to Oklahoma via Kansas”