Islamorada and a very unique hotel

We have been back from Florida for a fair few months now but a family holiday to Turkey and work keeping me extremely busy has seen Blogging the Road neglected and without updates. On the following few posts, I intend to post some pictures and videos and give a brief rundown of our Florida Keys trip for our 20th wedding anniversary.

We set out from our home in Derby nice and early and the drive down was uneventful. Our biggest worry about this trip was that we had inadvertently booked the flight with American Airlines via British Airways website, and we had read LOTS of horror stories and bad reviews about AA. Surly staff, planes with no rear seat entertainment, delays and cancellations without apology are just the tip of the iceberg according to the many online testimonials we had read. We were pleasantly surprised with how fast and organised AA check-in and security was and 25 minutes after arriving at Heathrow Terminal 3 we were sitting in the Aspire Lounge relaxing.

Random BA plane that we should have been flying on had i read the website properly when booking!

The decision to upgrade to extra legroom was justified

a window and an engine

The flight went very well. The flight attendants attended, no annoying kids close by, drinks and food were ok and relatively plentiful and the in-flight entertainment worked as it should. Whilst American Airlines wouldn’t be at the top of our list of carriers come our next transatlantic adventure, I wouldn’t have a problem using them if they were the only ones available or were a lot cheaper than Virgin. 9 hours after taking off we were touching down in Miami.

We got through immigration relatively quickly and were soon on the sky train to the car hire parking lot to pick up the Ford Mustang that was waiting for us. Initial thoughts on it being a scruffy white ‘stang were disappointment as I was hoping for yellow or red ( no other reason that they are sportier colours than white) but it did the job fine and 15 minutes later we were heading out onto the Miami roads with the hood down and the wind in our face on our way to the first stop, Islamorada. Well, we were on our way after we had stopped and put the hood back up do to very dark skies and a quite heavy downpour. 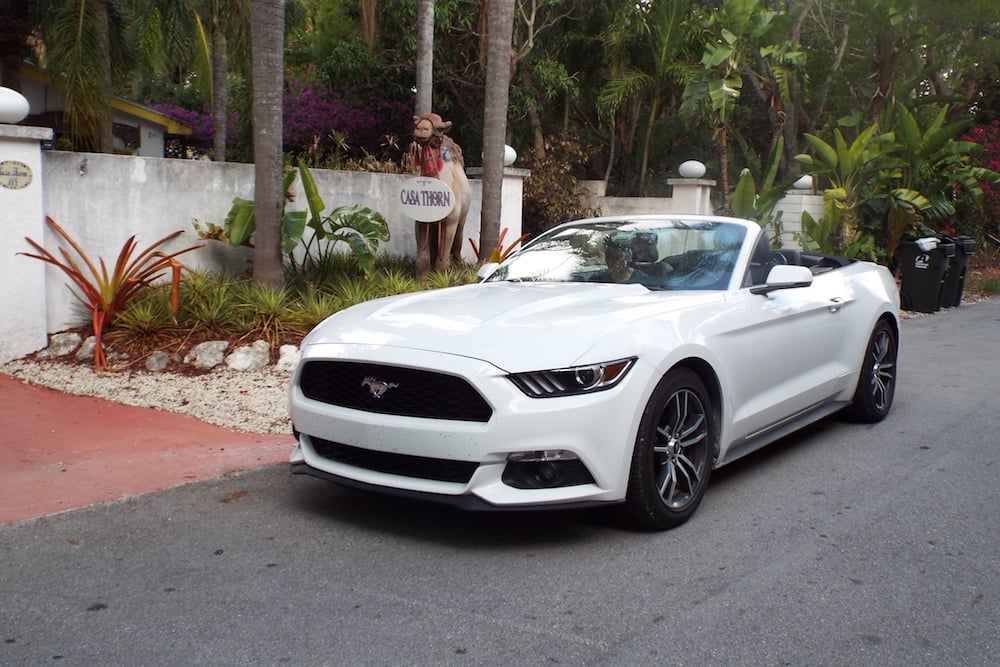 We were staying at the Casa Thorn Bed & Breakfast just off highway one in Islamorada. From what we had seen and read on the internet we were expecting it to be unique and we weren’t left disappointed. You are greeted as you pull into the car park by a camel and various palm trees and plants. The property features five individually decorated and themed rooms set around a small pool and patio with quirky oddities and statues in every corner. We were greeted by Mrs Thorn on arrival and I don’t know who she is or what she has done in the past but the grand piano in reception was topped with numerous photographs of her with famous faces and the entire B&B is decorated with artefacts she has got on her travels. We were in the Morrocan Suite. It had a huge 4 poster bed which was amazingly comfortable and the bathroom was the size of our front room at home. In fact, the bath itself was bigger than my bathroom! You can read our Tripadvisor Review here.

That night after unpacking our stuff we walked down to the Marker 88 restaurant to watch the sunset, eat good food and drink even better cocktails.