Key Largo and a tropical paradise

After a late breakfast at the Old Town Manor, it was time once more to pack the car and hit the roads again. We enjoyed Key West but I’m not sure we will revisit. As nice as it was doing nothing but eating, drinking and wandering we couldn’t get over the fact it felt a little bit like America’s version of Benidorm, not quite that trashy but nevertheless a party town first and foremost.

The drive up North to Key Largo took about 3 hours with a few stops to take photographs and visit roadside shops. It wasn’t too long before we were at our first destination – Kiffneys Shooting Range. We had read on the internet that you could pretty much turn up, show some ID and they would let you onto the shooting range. Having next fired a handgun before we thought let’s see what all the fuss is about, so it was with trepidation we parked up and headed into the gun shop.

I’ll not get into the whole American Gun law debate but the firepower that was available to buy did leave us a bit shocked. As Lilly livered limeys the closest we had got to guns before was our sons Nerf collection so to see everything from handbag sized 9mm’s to Semi-automatic machine guns on display and for sale was a little weird. We explained to the woman behind the counter that we had never fired a gun before ( she wasn’t phased), showed our passports, paid our $50 and filled out a form and were then shown to the shooting range, gave a 5 minute rundown on how to load, hold and fire a 9mm pistol and then left to our own devices :o.

We had the opportunity to try other guns as well but were more than happy playing bang bang with what was probably a small and low powered 9mm Glock. We were in the range for about an hour and went through two boxes of ammunition as we destroyed our paper targets. I managed to get one or two shots through the heart but it generally went that as you pressed the trigger the bang and recoil would cause your arm to move and if my target was a real person they would have been left with a seriously grazed shoulder lol. It was a fun way to waste a couple of hours but I cant say ill be rushing back to the range and it did dispell the myth of gunfights in Hollywood movies, even a standard 9mm was very loud and the moment you fired it in a room you’d probably be left deaf! 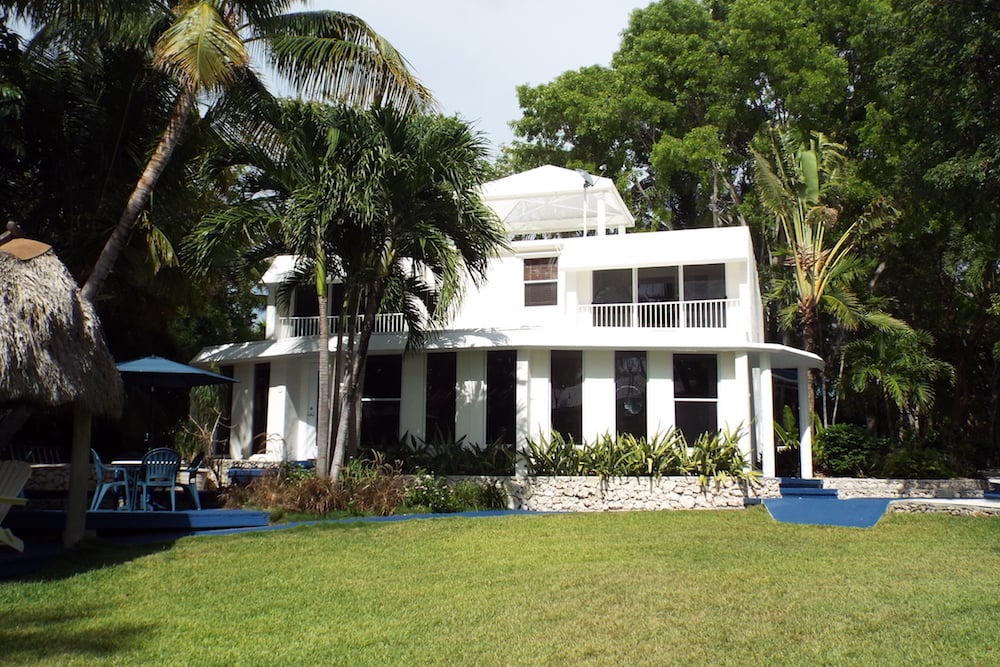 From Kiffneys it was a short drive to our home for the next couple of days after a stop at a Walmart to get some goodies. We drove past the Azul Del Mar a couple of times as although it was just off the main road, it was very secluded. Nestled behind trees and vegetation the Azul Del Mar is a tropical paradise. Its an adults-only boutique hotel located between lush green lawns, with Iguanas running around freely, which drop down to its own private beach and dock area. The building itself is wonderfully art deco in style and has 6 self-catering rooms with everything you would need for a longer stay in the area. We had chosen an Ocean View room and were not left disappointed. The room featured a living area with a small kitchen and large leather sofas and that led to a large balcony with full patio doors and another large leather sofa to sit and appreciate the view.

We were met in the grounds by Domonic, the proprietor who showed us around the hotel and gave us some local information on restaurants and some useful advice on visiting the Everglades and which airboat tours and Alligator farms were the best. We only had two nights at Azul Del Mar and we could have stayed a week it was that lovely. I would like to think that in the future we find a good enough reason to revisit the Keys just so we can stay here again for a little longer and go swimming off he dock or kayakaing around the bay.

That evening we walked down the road to Jimmy Johnsons Big Chill restaurant and tiki bar. Apparently, Jimmy Johnson is an ex American footballer and head coach of the Miami Dolphins so it was very sports themed by the portions were big, the food was tasty and the alcohol was welcoming. After dinner, we headed back to the hotel room for an early night as we had a long day ahead of us in the Everglades the following morning.