Hitting the highway to Key West

After an early breakfast at Casa Thorn we repacked our suitcases, threw them in the ample boot of the Mustang and said our goodbyes to Islamorada. Today we are driving Route 1 down to our next hotel in Key West. First stop of the day was at Robbie’s for decent coffee. Set down by the water Robbie’s is a bit of everything, tourist tat shops, bar and restaurant, boat and jet ski hire and strangest of all Tarpon feeding. Tarpon are huge ugly fish that you can buy a bucket of sardines or similar and hand feed them to the Tarpon. Was interesting watching it from afar and watching the Pelicans try and steal the fish however there was no chance I was spending the day stinking like a fishmonger just so some big fish could get fed lazily.

The Overseas Highway is a 113-mile highway carrying U.S. Route 1 through the Florida Keys. Large parts of it were built on the former Overseas Railroad, the Key West Extension of the Florida East Coast Railway. Completed in 1912, the Overseas Railroad was heavily damaged and partially destroyed in the Labor Day Hurricane of 1935. The Florida East Coast Railway was financially unable to rebuild the destroyed sections, so the roadbed and remaining bridges were sold to the state of Florida for $640,000.

We weren’t really sure what to expect other than lots of bridges. There seemed to be lots of pull off parking to take photographs but with the heavy traffic and the fact we only saw them as we passed them, we didn’t really stop along the way so you will have to excuse the dodgy pictures taken from a moving car.

As roads with bridges go, US Route 1 is pretty impressive, especially the 7-mile bridge which, despite what the name suggests is actually only 6.7 miles long. The road passes through built-up area, shipyards, swamps and mangroves and area where it’s not far off water lapping up onto the road. We were soon driving into the outskirts of Key West and pulling up at our next base, The Old Town Manor guesthouse just off Duvall Street in the heart of the town. The Old Town Manor was built in 1886 and features 14 individually designed rooms. We had picked the Anniversary room with its four poster bed and balcony and whilst it wasn’t the largest room it was more than comfortable for the time we had planned to spend there. 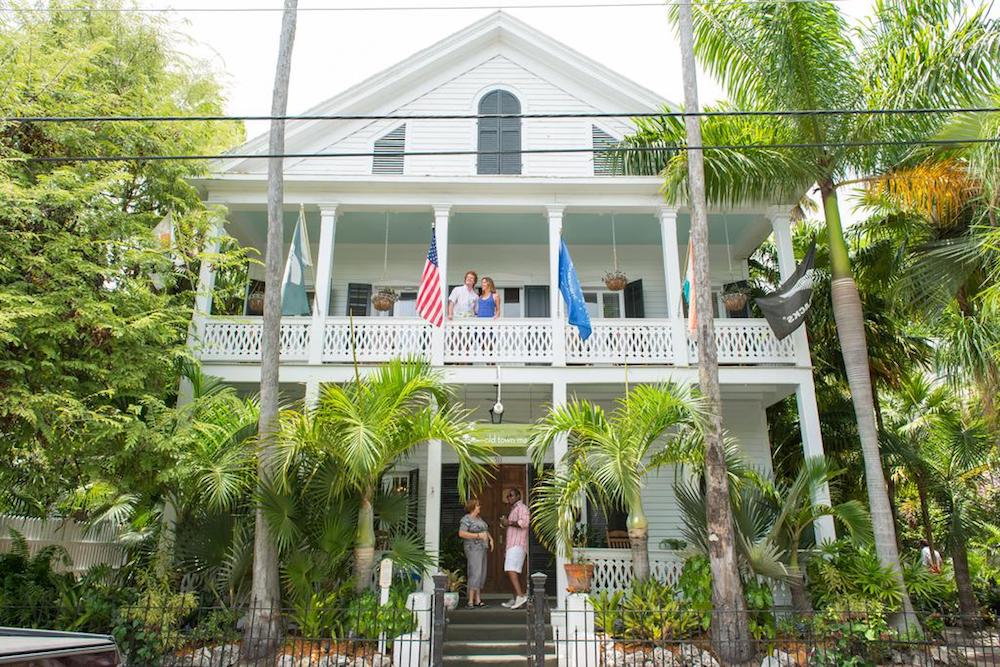 As we had arrived early our room wasn’t ready so we parked up at the hotel and headed to Key West to get some food and a feel for the place.First impressions were good, lots of bars and live music venues and a fair share of tourist shops selling cheesy t-shirts and the likes. We stopped at the Hard Rock Cafe, ordered a couple of beers and a huge plate of Nachos Grande and sat outside in the sun taking in the atmosphere. After we had supped a couple of pints and finished lunch we took a quick stroll down Duvall street popping in and out of shops and checking out the bars for later before heading back to complete check-in at the hotel.

That evening we walked over to Mallory Square for the Key West Sunset Celebrations. According to the blurb on various websites, it’s the most picturesque place to watch the sun go down and the square is full of street performers and musicians to entertain the crowds. The evening we went we were treated to a damp squib of a Key West Sunset as it was relatively cloudy so the sun just sort of disappeared rather than set, and there were none of the beautiful oranges and reds that you see in the pictures.  Once the crowds had left we had dinner at El Meson de Pepe, a Cuban restaurant close by with wild chickens and roosters running around your feet as you ate. We sat outside listening to live Cuban music being played and had an enjoyable evening. The food wasn’t great but that was probably due to our tastes rather than the food being bad and it wasn’t bad value for money. After dinner we wandered through the Key West Sponge market and slowly headed back to Duval street for a beer before heading to bed.

← Exploring the Village of Islands
Relaxing in Key West →