Winslow to Kingman via Seligman

I was standing on the corner in Winslow Arizona, and such a fine sight to see, It’s a girl, my lord in a flat bed ford slowin’ down to take a look at me ” sang the Eagles in 1972, so it would be rude not to find the corner they were singing about as we started todays travels in Winslow.

As it happens they were not singing about a particular corner but that hasn’t stopped the local tourist office dedicating the corner of Old Highway 66 and N Kinsley Ave to the line in the song Taking it Easy. Its a very popular photo stop on route 66 and due to the songs inclusion in the first youtube video we watched after we had decided we were road tripping route 66 it was the spiritual highpoint of my Route 66. 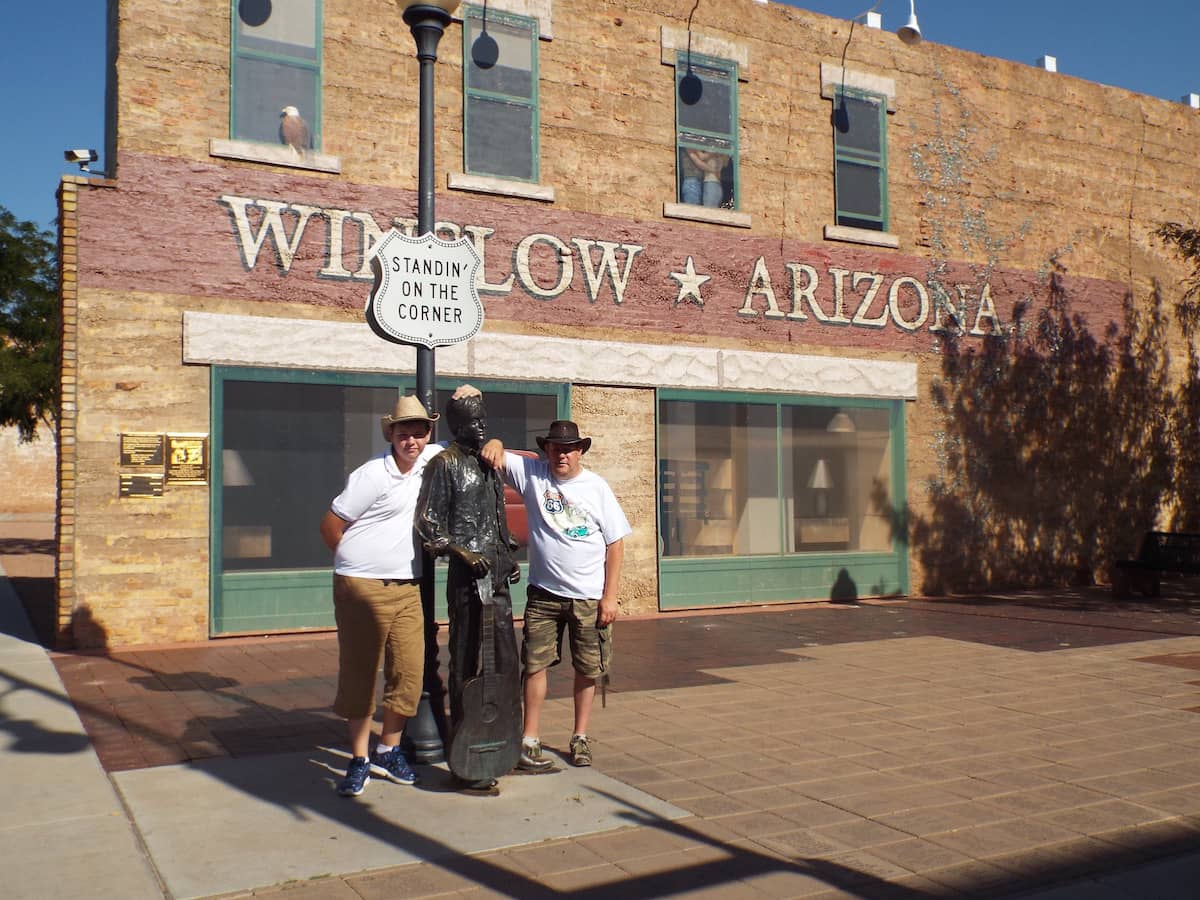 After the photographs were taken we crossed the road and ate breakfast at Dar’s which was great. more pancakes, bacon and sausage but really friendly waitress and nice route 66 vibe. From Winslow we headed out along the I40 again and our first stop was Two Guns and a fascinating talk with a local. 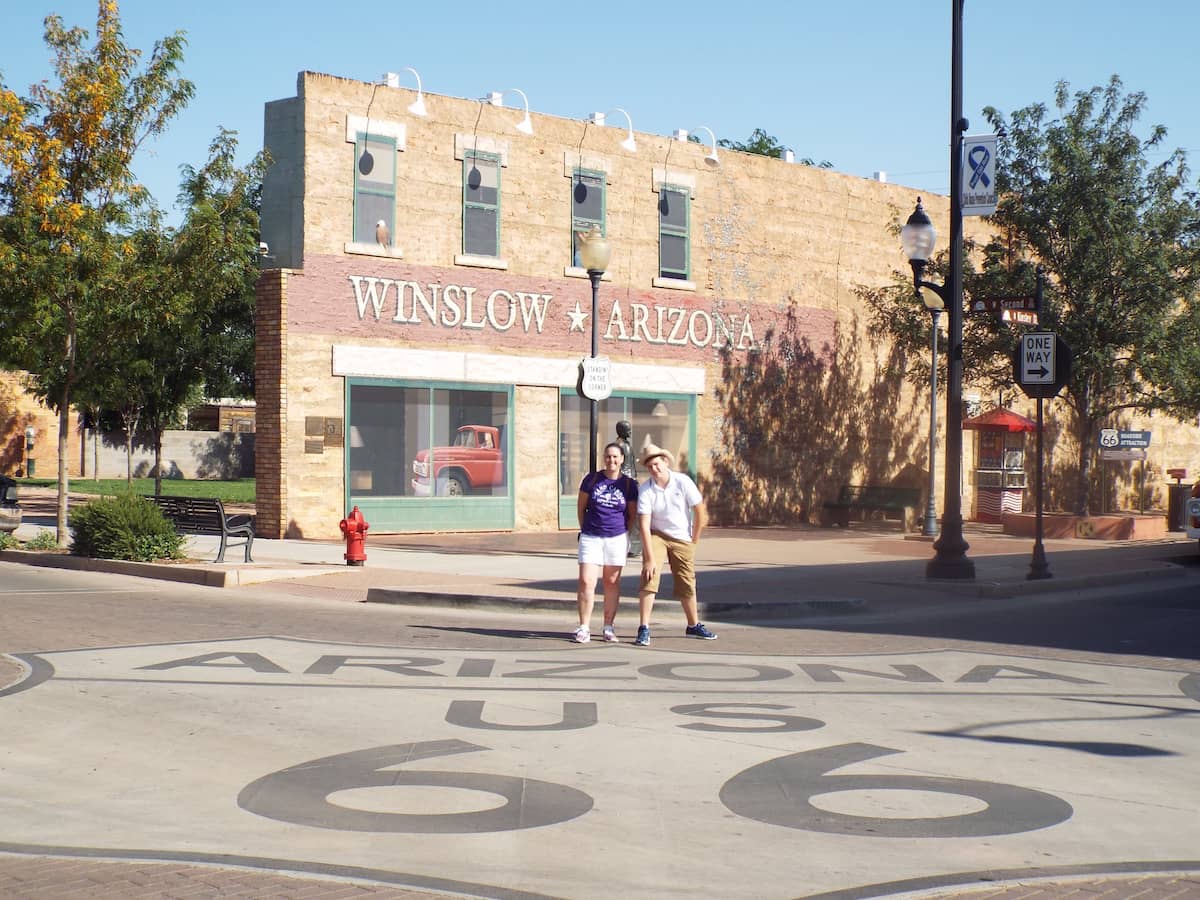 Two guns is another of Route 66’s ghost attractions. Once it was a bustling tourist trap with an RV park, gas station, souvenir shops and even a zoo housing mountain lions, panthers and other wild cats at one point. As with many other places along route 66 as soon as the I40 was built Two Guns started its rapid decline towards looking like the set of a post armageddon zombie movie. We drove right down to the mountain lions entrance sign and got out the car to have a wander and take some photos when a guy in huge pickup truck drove up from the ruins below. He stopped and at my first thought was – oooh, we are gonna get told off for trespassing or something worse lol but to my amazement he rolled down his window and asked us if we wanted to know some history on the place. 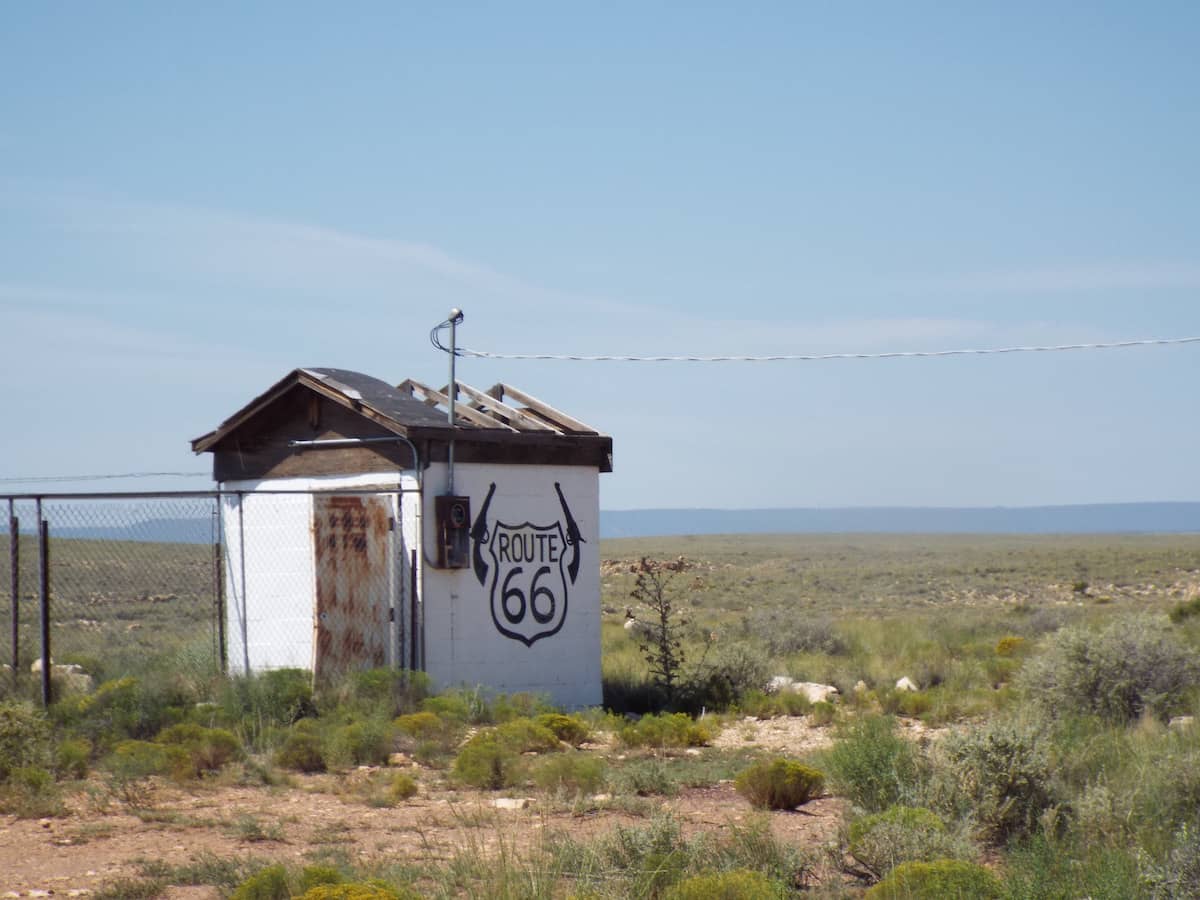 Anyway, to cut a long story short it turned out that it was the grandson (possibly great grandson) of the guy who originally built the zoos. he told us the whole history including all about the Indian ruins that his grandad had built to add authenticity. We had a fascinating 15 minute chat before we parted. Its this kind of random encounter that has really made our road trip so far. 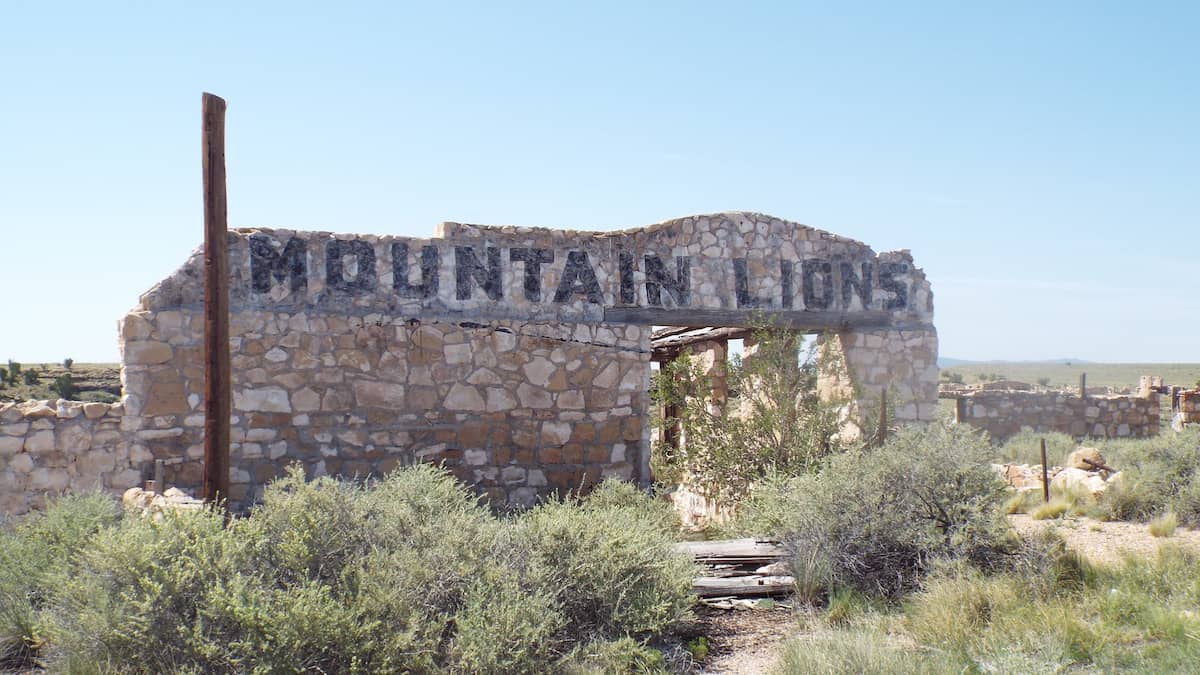 We eventually left two guns and kept on the I40 until we got to Seligman where lunch and a really good wander was planned. Seligman has really embraced its route 66 history and is packed full of antique and souvenir shops, diners and motels. Seligman is also home to the famous Angel Delgadillo who after spending his life as a barber and souvenir shop owner in the town saw it gradually start to die after the opening of I40. He has been dubbed the Guardian Angel of Route 66 after founding the Route 66 Association of Arizona to campaign for 66 signage and recognition of the route. This in turn led to associations being formed in all 8 states which take in the mother road.  Angel Delgadillo was also another important figure in the Disney / Pixar movie Cars after meeting the producers and telling them about the decline of the town. At the age of 88 Angel still cuts hair in his shop and is a tourist attraction himself although he wasn’t in the shop on the day we visited due to a fall a couple of days before which was a great shame. 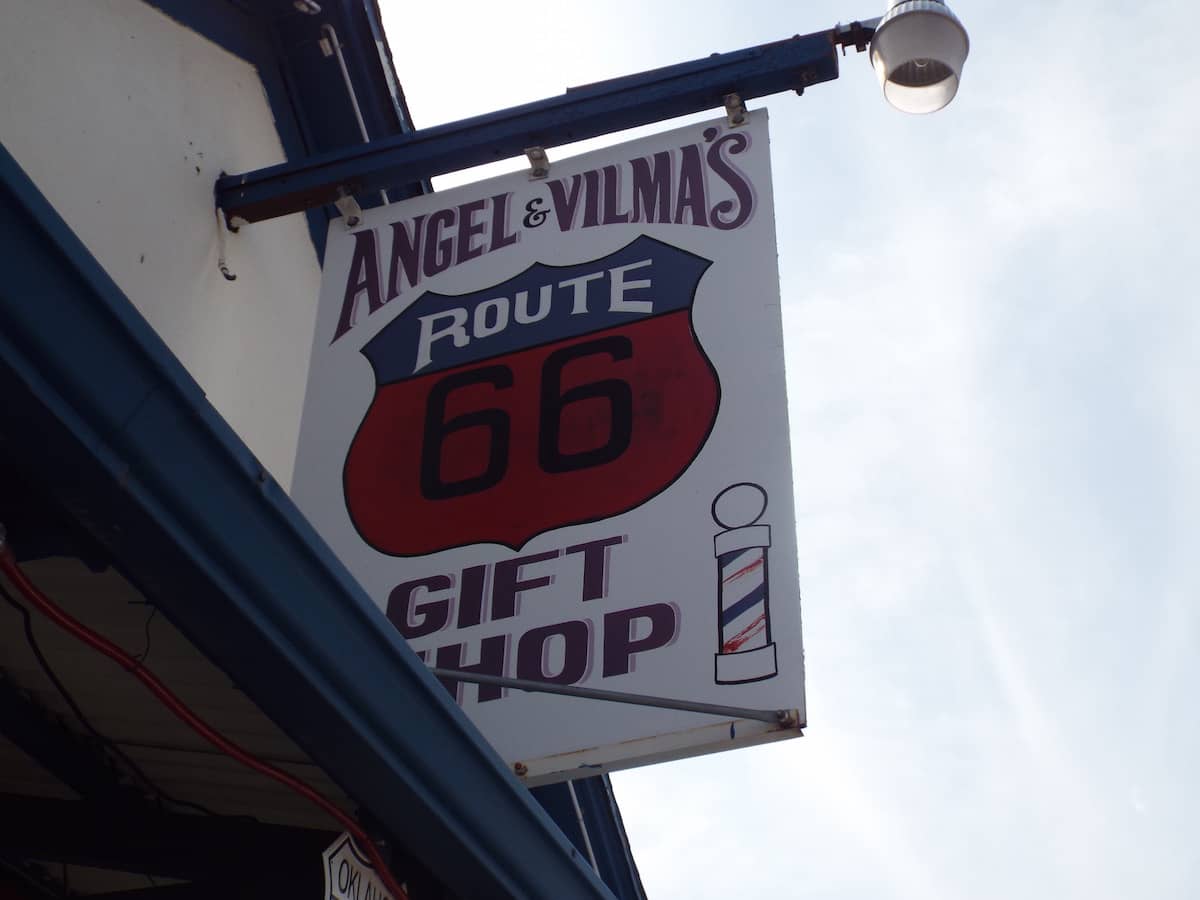 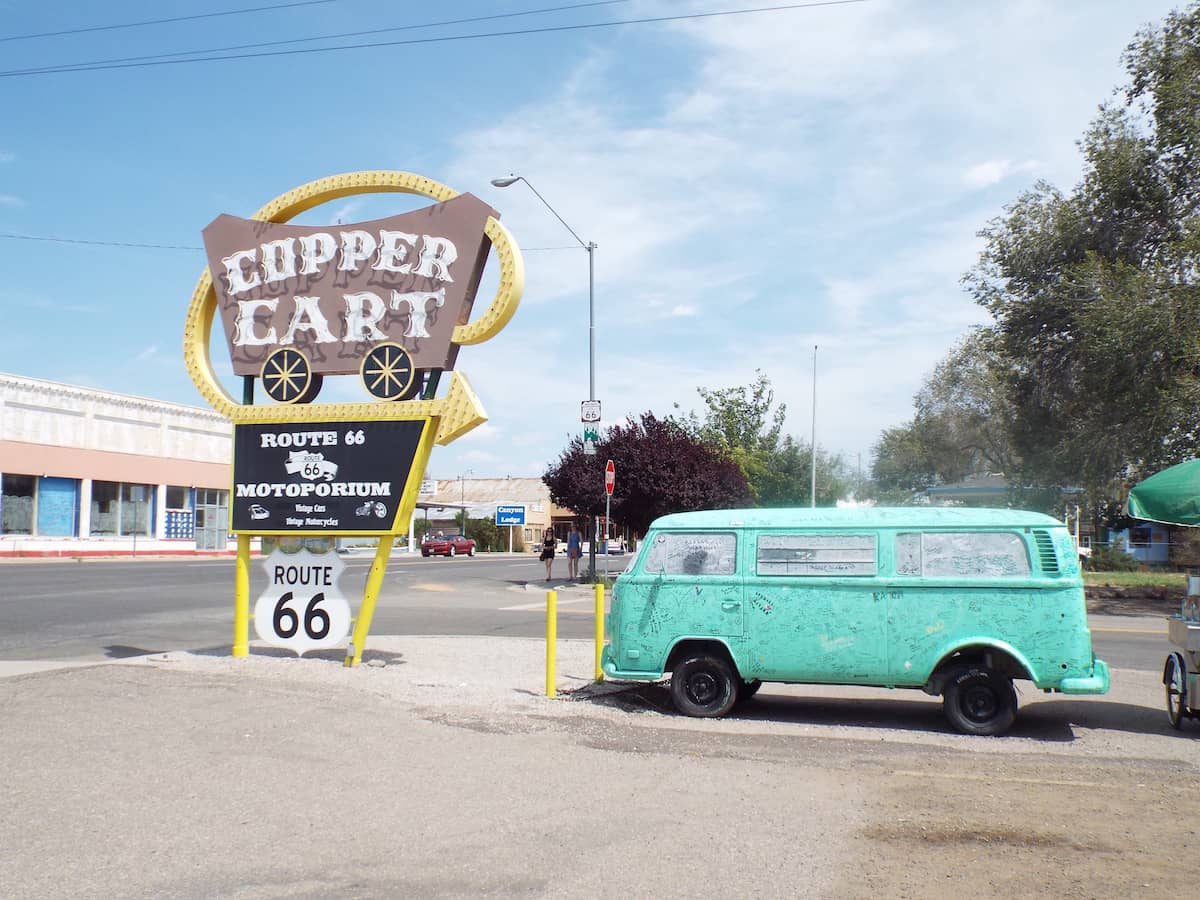 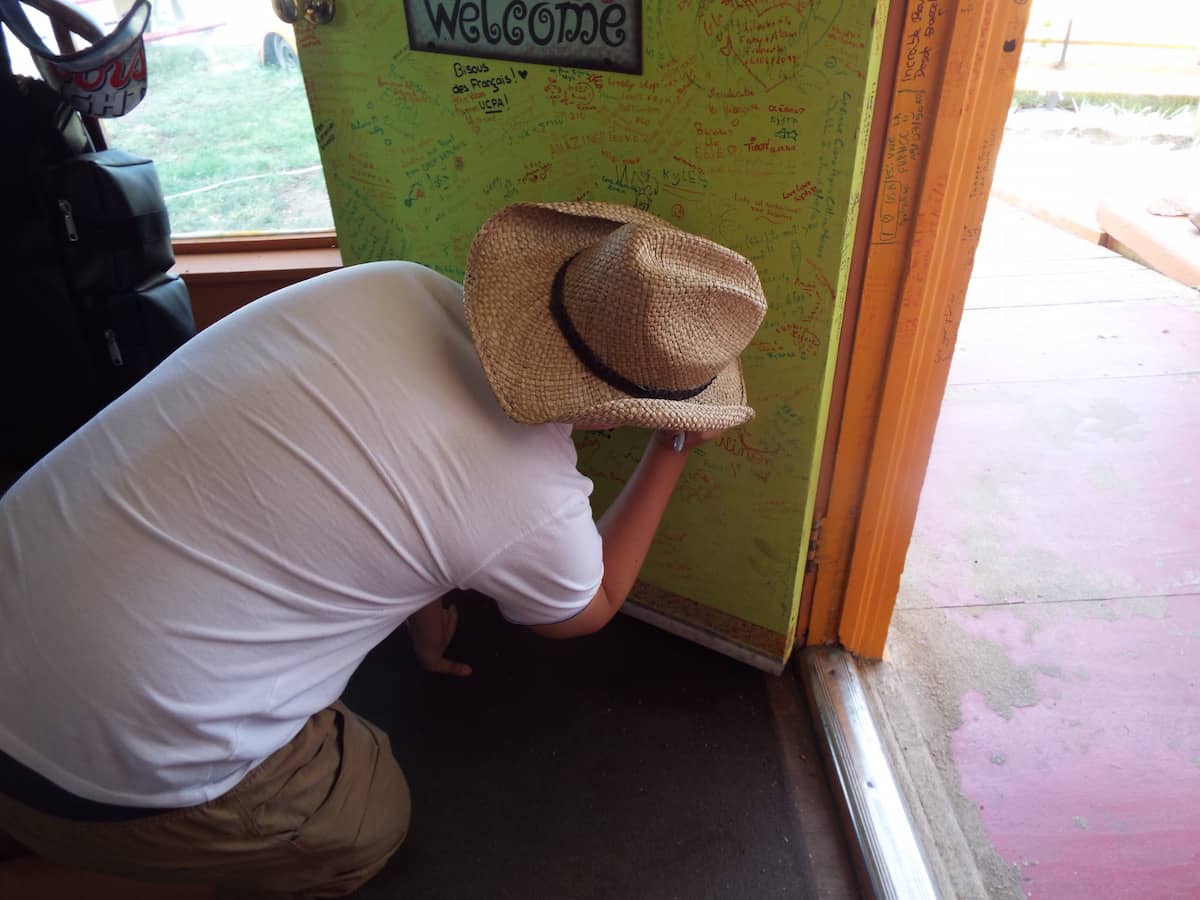 We visited all the shops along the main road, signed doors at The Sunflower antiques shop and had a good chat with the Canadian owner and eventually ate Corn dogs and chilli dogs from The Snow Cap restaurant. The Snow Cap was run by the late brother of Angel Delgadillo, Juan who was renowned for his craziness and playing jokes – a prime example being when you ask for a straw for your shake you get offered a handful of “straw”. Its good to see that the current owners ( maybe still in the family, i’m not sure) have continued this tradition though i don’t think the girl serving us was trying to be funny when she asked us if we were from Newcastle ! 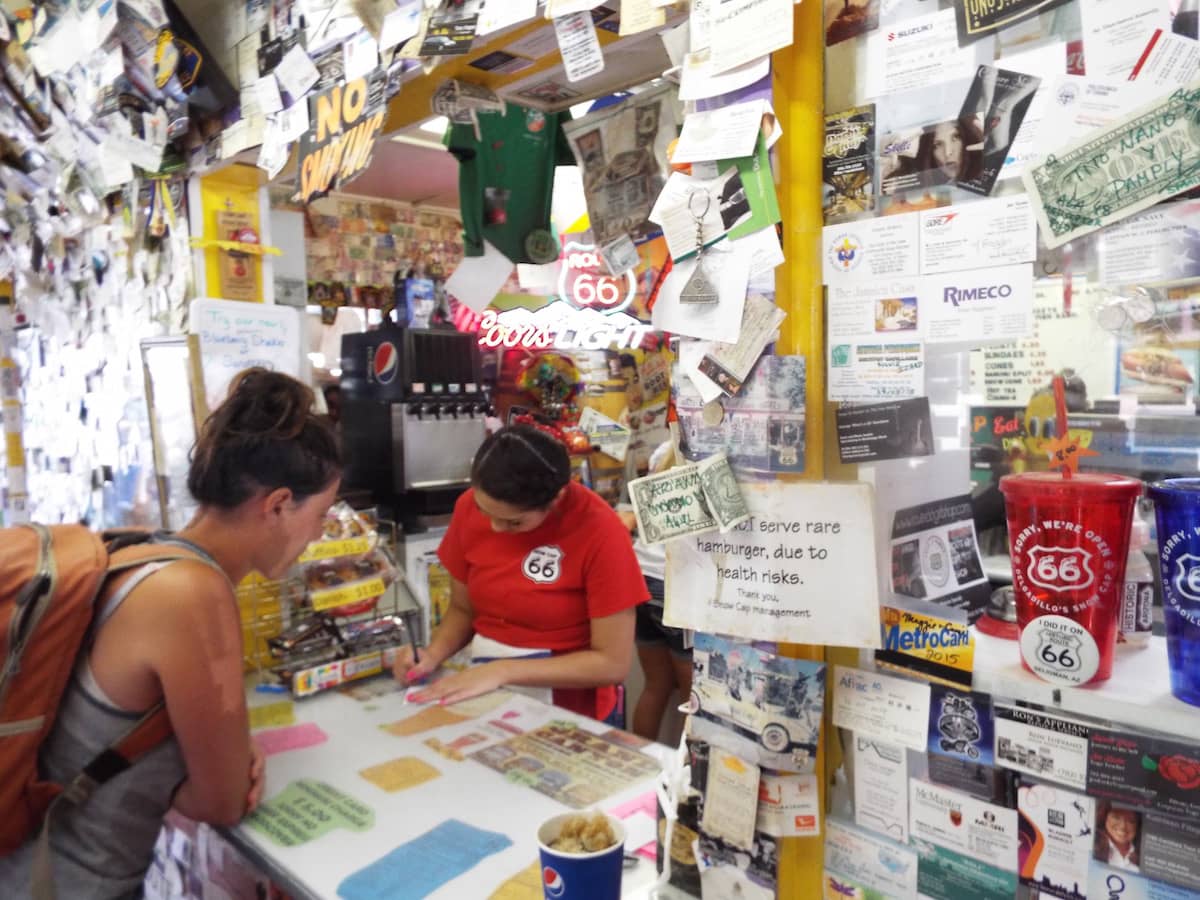 From Seligman it was back onto route 66 and a long drive through Peach Springs ( apparently one of the towns that inspired Radiator Springs though id say Seligman was more appropriate), Truxton and Valentine before eventually stopping at the Hackberry General Store in Hackberry. The Store is part souvenir shop part museum and has a fantastic array of old American cars outside to take a look at including an original Ford Model A and a (little) red corvette along with Cactus, old signage and vintage gas pumps. 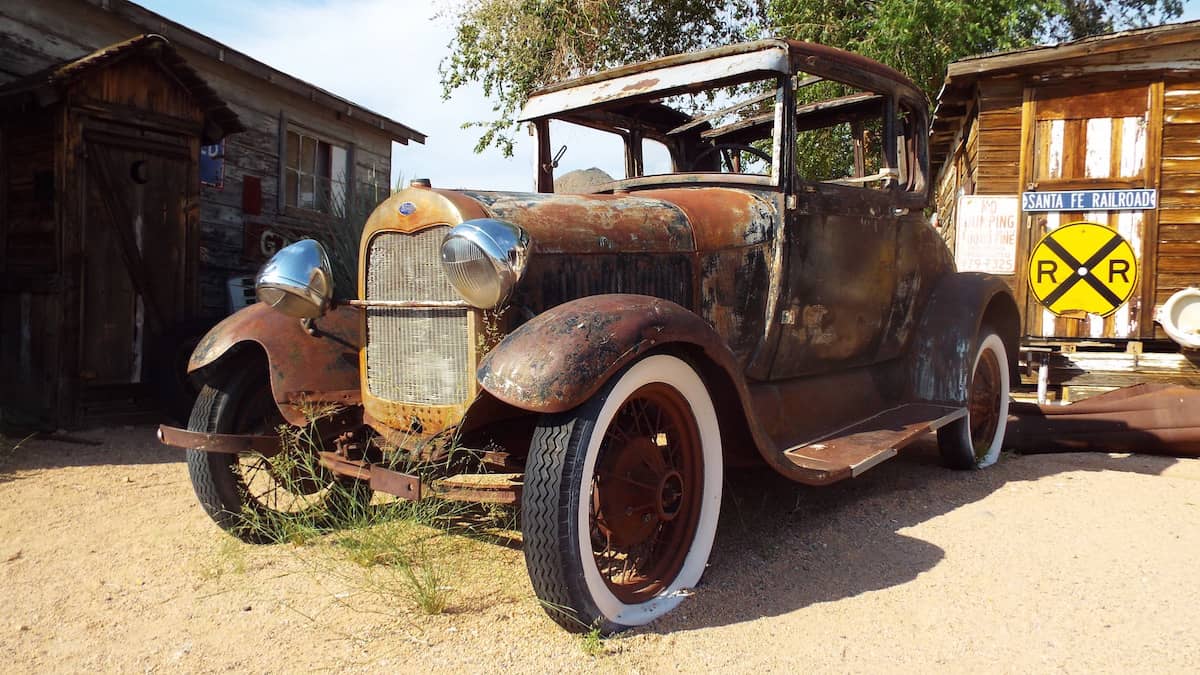 It was all old route 66 down into Kingman and to the El Trovatore motel. Ive got to say i wasn’t really looking forward to this motel. In the pictures id seen it looked old and dingy and we had paid by pay pal with no real confirmation so i was expecting the worse. HOW WRONG COULD I BE !! It was a great motel ! We were met in the reception by the owner who proceeded to tell us some history on the motel and on Kingman, she gave us information on the local restaurants and things to do and then gave us all a cool Route 66 pin badge as we were travelling the mother road. All the bungalow rooms were laid out around a parking court and all the fronts had been painted to depict cartoon characters, film stars and typical wild west scenes. We were shown to the Marilyn Monroe room and found it to be large, clean and perfect for our stop so i really had nothing to worry about. 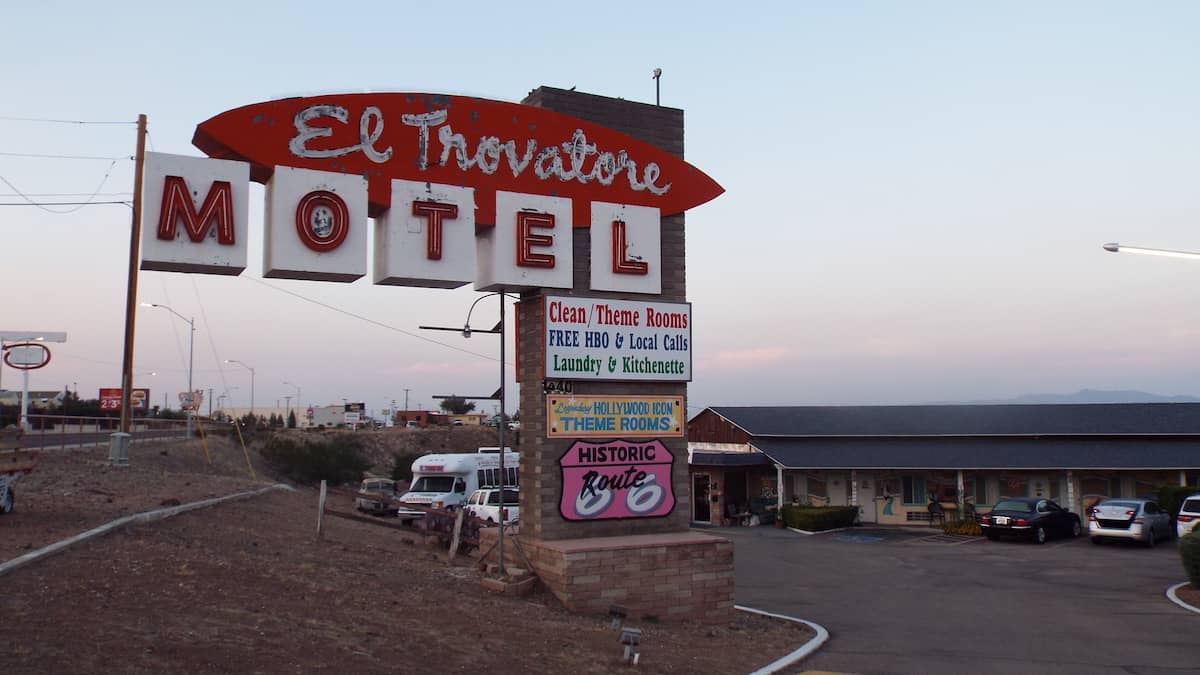 Kingman itself was a busy town with lots of motels, shops and neons to look at it – it was a bit like i was expecting Tucumcari to be like. That night we ate at Mr D’z route 66 diner. It was straight out of the 1950s with its big neon sign, stall seating, black and white tiled floor and juke box. Unfortunately they had decided to close that part of the restaurant for cleaning so we were shuffled into a side annexe with migraine inducing fan and light combinations which flickered to the point of almost causing a seizure ! This put me in a bad mood immediately  which wasn’t helped by the less than speedy service. We stuck with it though as it had some good reviews and ordered our food from the record shaped menus. I ordered an Andy Devine burger with Sweet potato fries and it was adequate ! If i was going be picky id say there was too much filling for the burger buns which were too thin and delicate to handle it. Subsequently i ended up with bbq sauce everywhere to accompany my now pounding headache. Mr D’z offered so much from the outside but delivered so little which was a great shame. 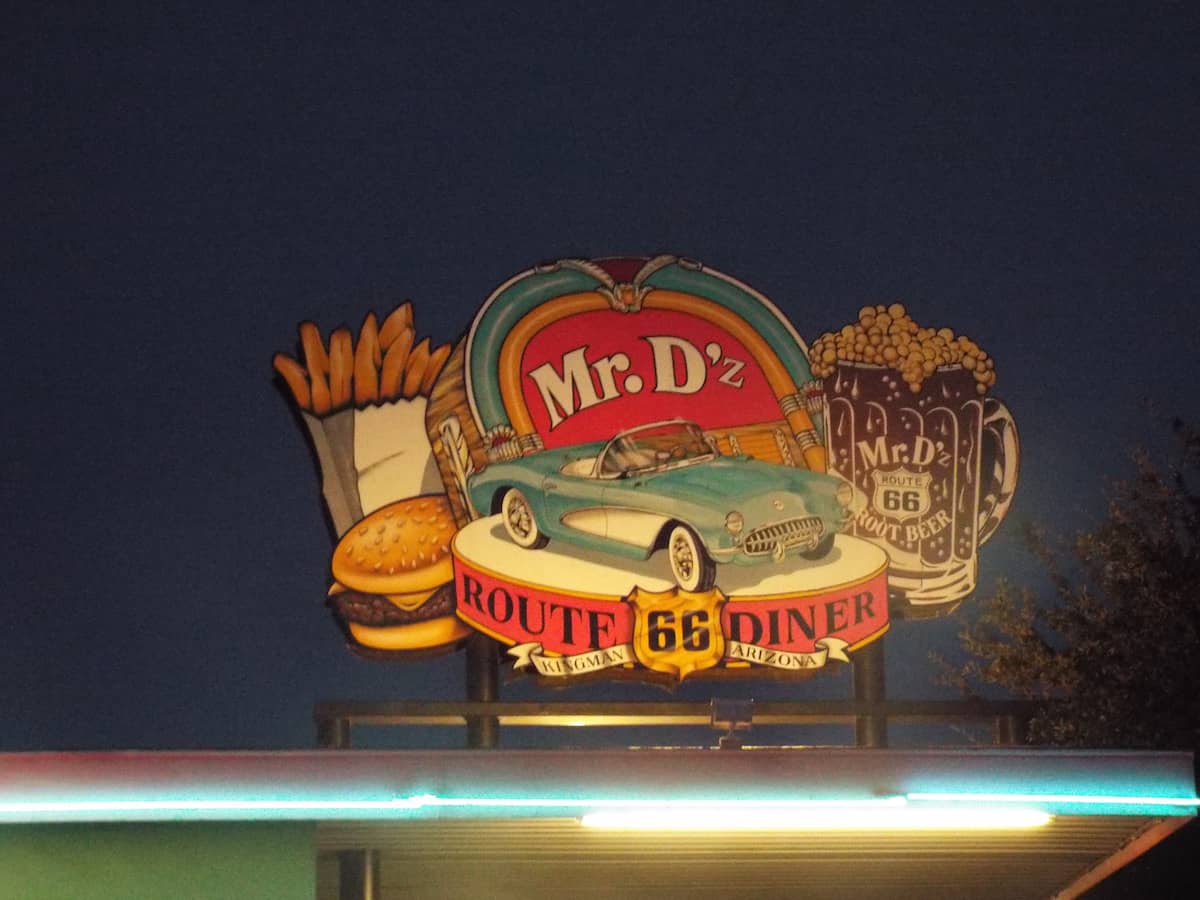 2 Comments on “Winslow to Kingman via Seligman”