After a heavy night on the beer with an American couple last night and a short walk to see Abraham Lincoln’s childhood house and other period houses we finally left the strange town of Springfield Illinois to head to St Louis..

Don’t get me wrong, we had a great time last night, the hotel was spot on and there were some impressive buildings such as the Illinois State Capital Hall, but despite the fact there was big country festival with live music and bbq etc on the place was dead. And i don’t just mean quiet, it was eerily dead. All we could think of was Wayward Pines, it seemed like the fronts of the building would have nothing behind them and the crickets we could hear screeching were actually speakers hidden in the bushes.

I don’t mean to diss the residents of Springfield (which before you even think about asking, were NOT yellow)  and i’m sure its an absolutely cracking place to live in reality – but as outsiders it felt a little strange lol 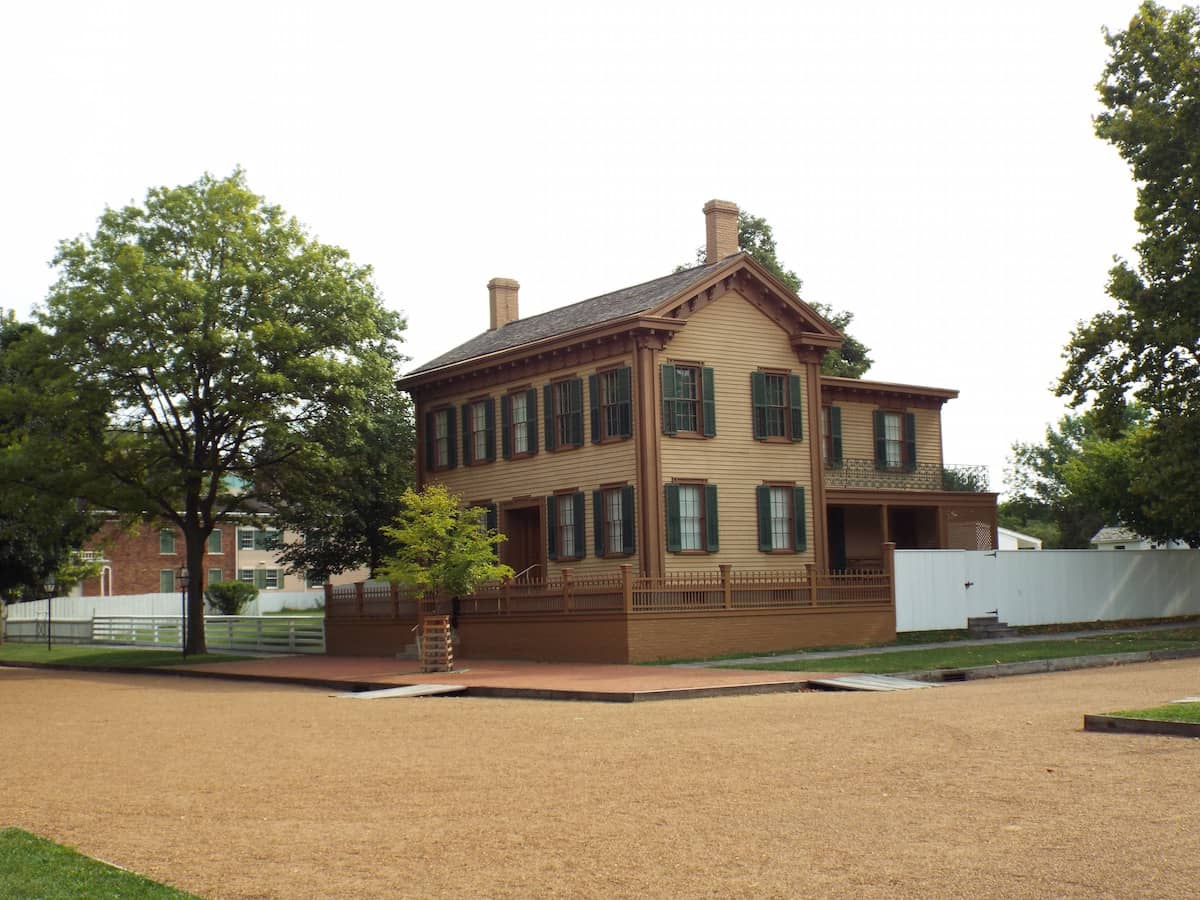 Anyway, we left Springfield and headed west on Route 66 passing through lots of little towns, villages and trailer parks. One thing that struck us as odd was the housing arrangements in America. Being from the UK we are used to the uniformity of estates with the generally the same size and style of houses on streets, all the same size front gardens, fences and low brick walls at the front etc. From what we have seen today the American way seems to be get a plot of land and then stick what ever kind of house you can afford on it. We passed big grand houses which had a trailer as a neighbour followed by a couple of small single story houses, and then a dilapidated and run down house with 5 rusty cars in the front garden and then another big house with well kept lawn and flower beds. Seemed really odd to us that you can drive 5 miles and see nothing but corn fields and then you come across a beautiful house and half a dozen trailers . 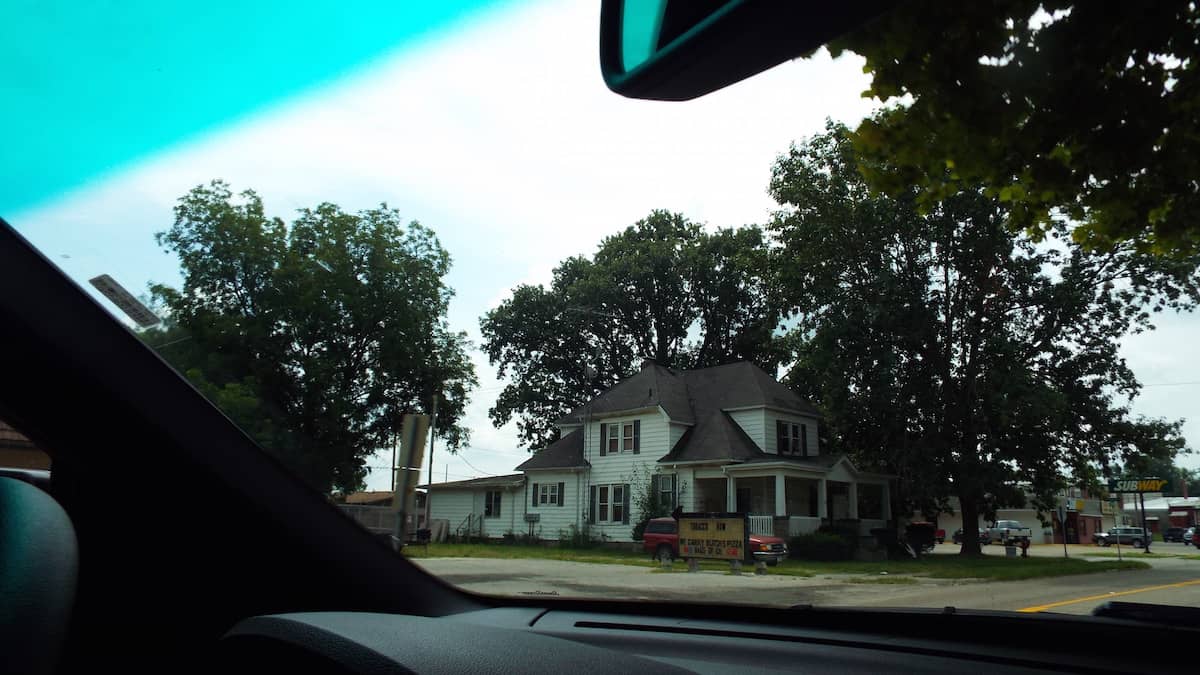 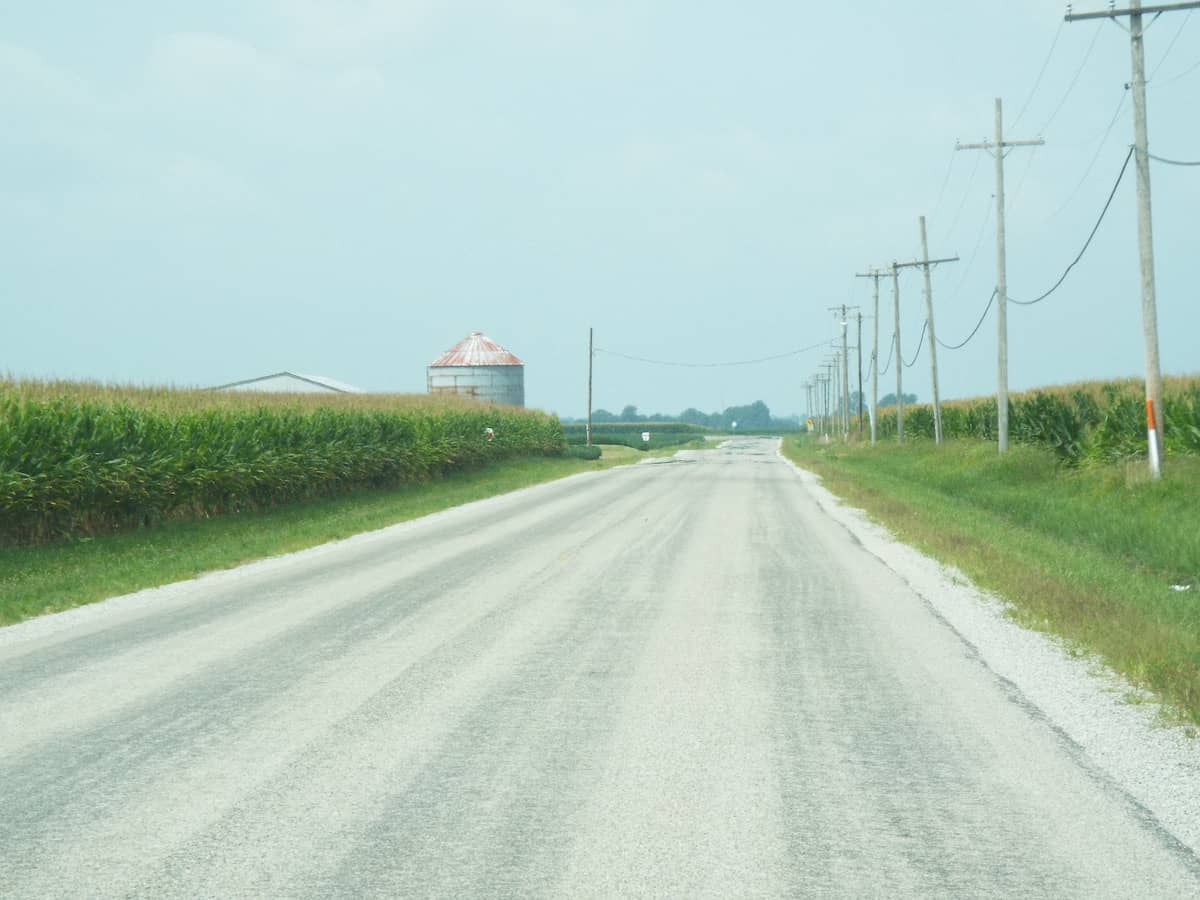 First real stop of the day was in Carlinville, a quaint little town with a nice square with all the local businesses around the square – very reminiscent of the town in Back to the Future to my mind. We stopped into Cherry Tree Gifts where Oz got a magnet and a soda and the owner showed him how the Jukebox worked – Oz was fascinated when he saw the inner workings of an original jukebox. 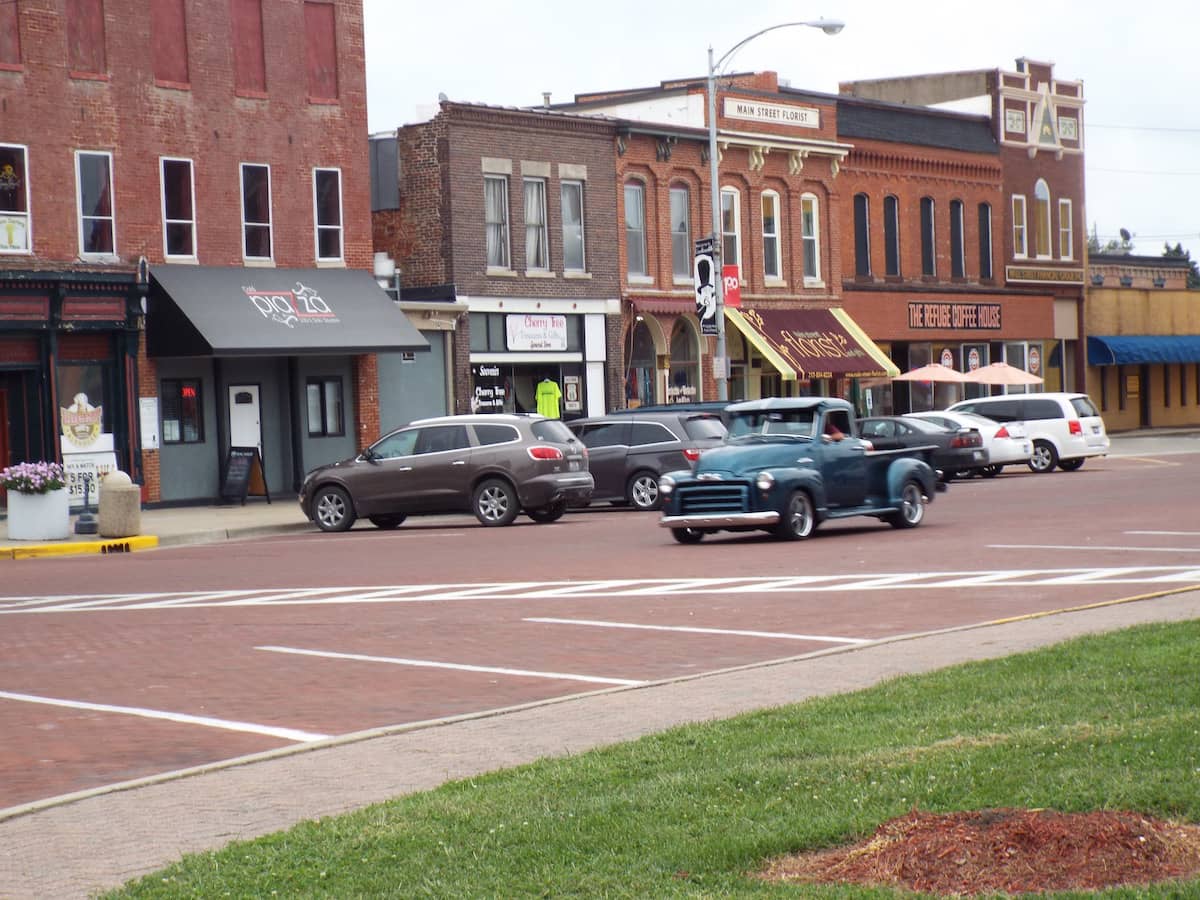 After leaving Carlinville it was lots of driving through Corn fields and little faming communities on old route 66. we took a few wrong turns here and there and missed a couple of the stops we would of liked to of made but eventually got to the Lunar Cafe in Mitchell. This apparently is an old haunt of Al Capone who used to come out this way to conduct business ! It has a great original neon sign and although it looked open we didn’t stop as we wanted to get to the Chain of Rocks bridge to take some photos. The bridge’s name comes from a large shoal, or rocky rapids, called the Chain of Rocks, which made that stretch of the Mississippi extremely dangerous to navigate and it has a 22 degree bend in the centre as it passes over the Mississippi river . It was a nice little diversion but road traffic can no longer use it so after a walk and some photographs we got back into the car and headed  onwards to ST Louis 11 miles away – and thats where the fun started. 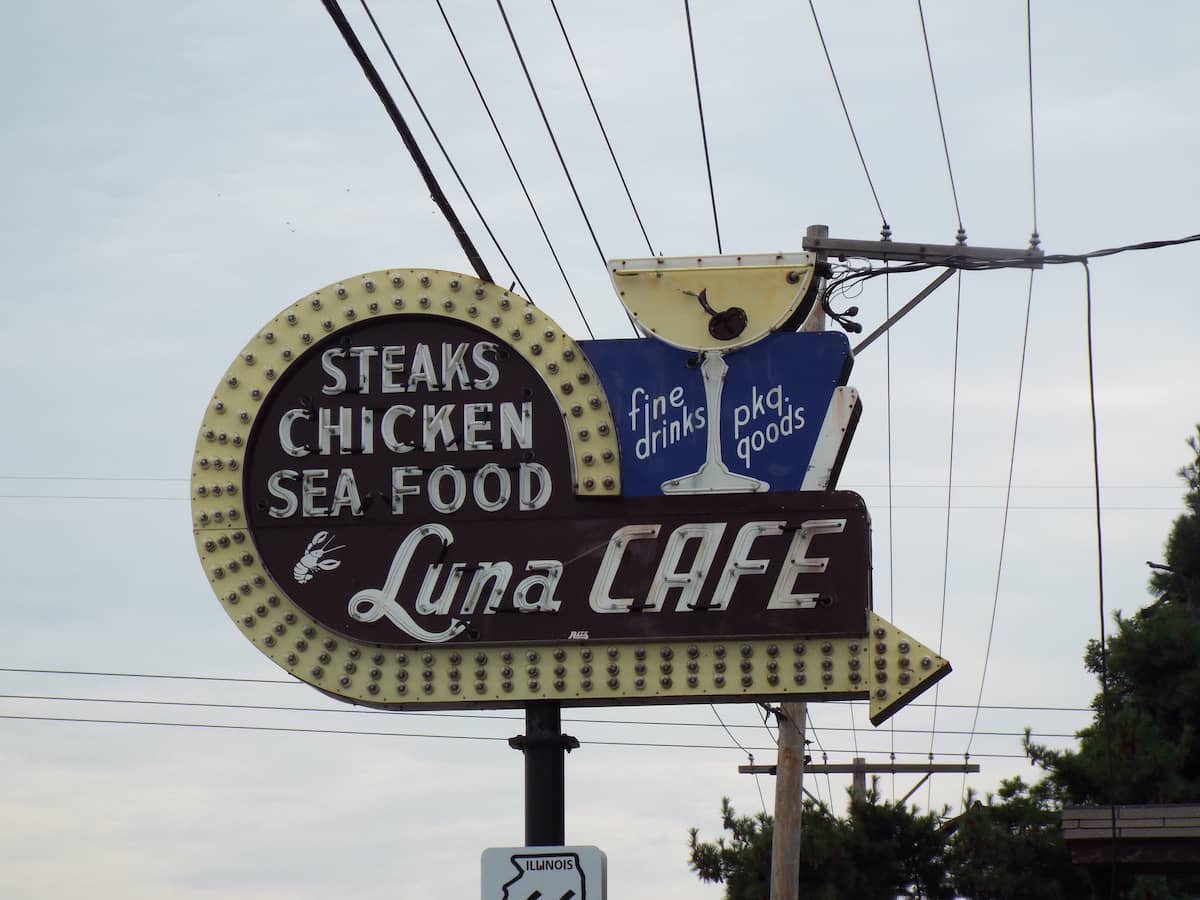 The guidebook advises that the route 66 entry to the city takes the less salubrious route so we decided to follow the sat nav from now on and take the major routes into the city – bad idea ! Seems like every road in St Louis is being dug up at the moment with bridges closed etc so it didn’t matter which way the sat nav took us we hit a road block or dead end. We ended up on the wrong side of the town so too speak and gotta say it was a lock the doors and don’t look at anyone type of place ! Eventually we realised our mistake. We had set the sat nav for N 7th Street East St Louis Il instead of N 7th Street St Louis Mo !! – one small mistake kept us driving round madly for about an extra hour and a half and took us through some very dodgy areas. if you havent seen it you tube The Griswalds in St Louis and that will give you an idea. When we were safely in the Hotel we checked out where we had actually been and turned out we spent a while driving lost around Ferguson where the riots took place last year. We left St Louis the following morning but that day was the Anniversary of the Brown Killing in Ferguson and all hell broke lose with gun fire, rioting and a state of emergency being declared in the county !! Close call there lol. 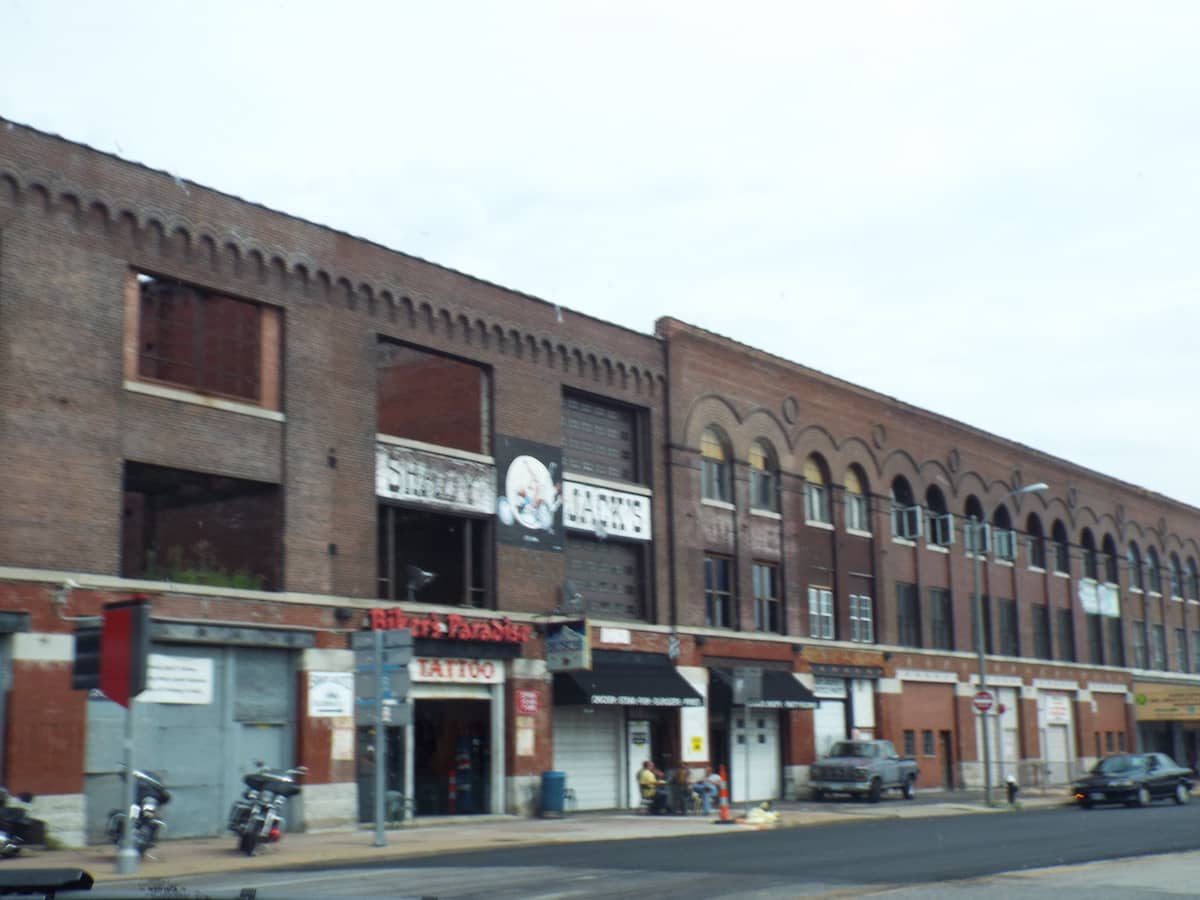 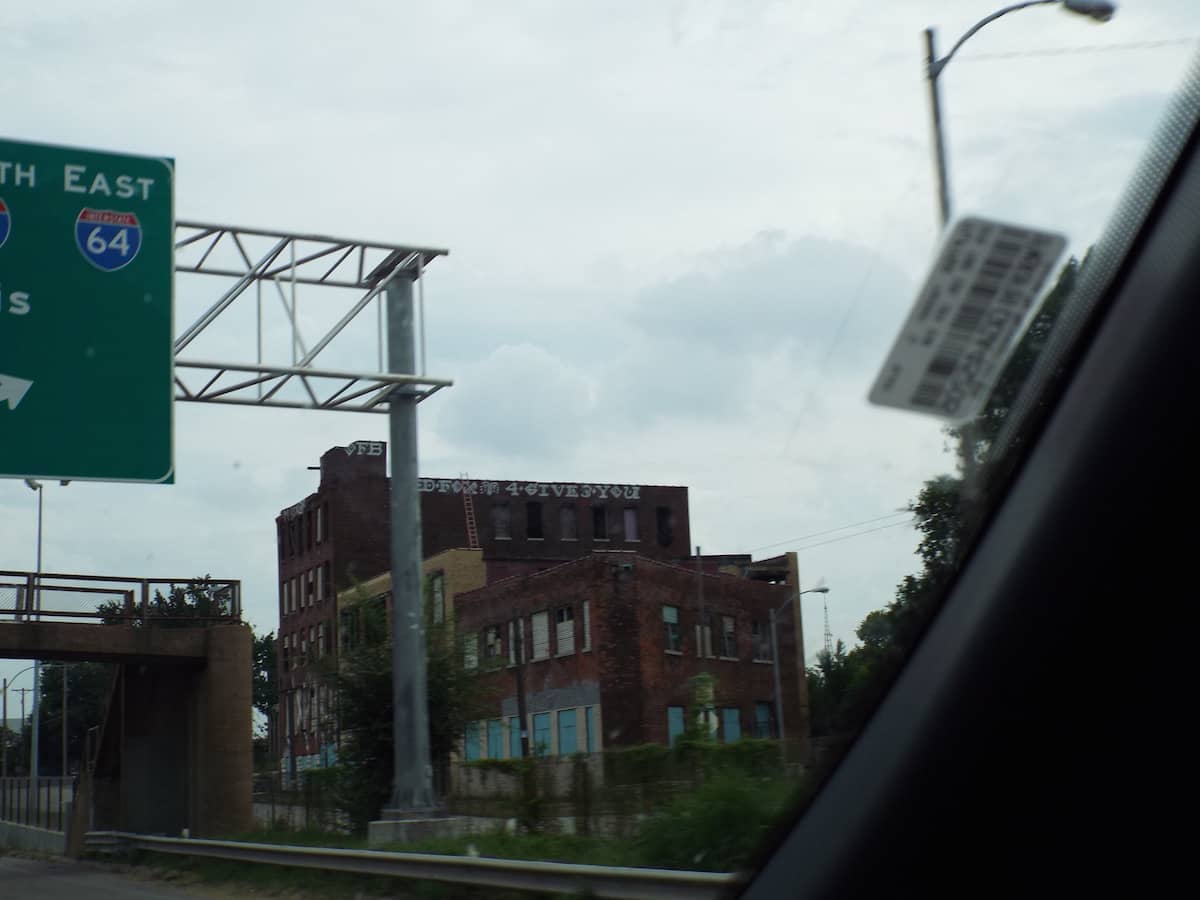 That evening we took a walk round the tourist sites of ST Louis, visited the Arch, which though impressive to see was slightly disappointing as they are doing a lot of work in the area so rubble and diggers galore around the Mississippi. We took a walk over to the Busch Stadium – home of the St Louis Cardinals baseball team. Oz bought a baseball ball and we got to see the pitch and inside the stadium through the railings. After that it was back to the hotel for a few drinks and a bite to eat and off to bed for another early start the following morning. 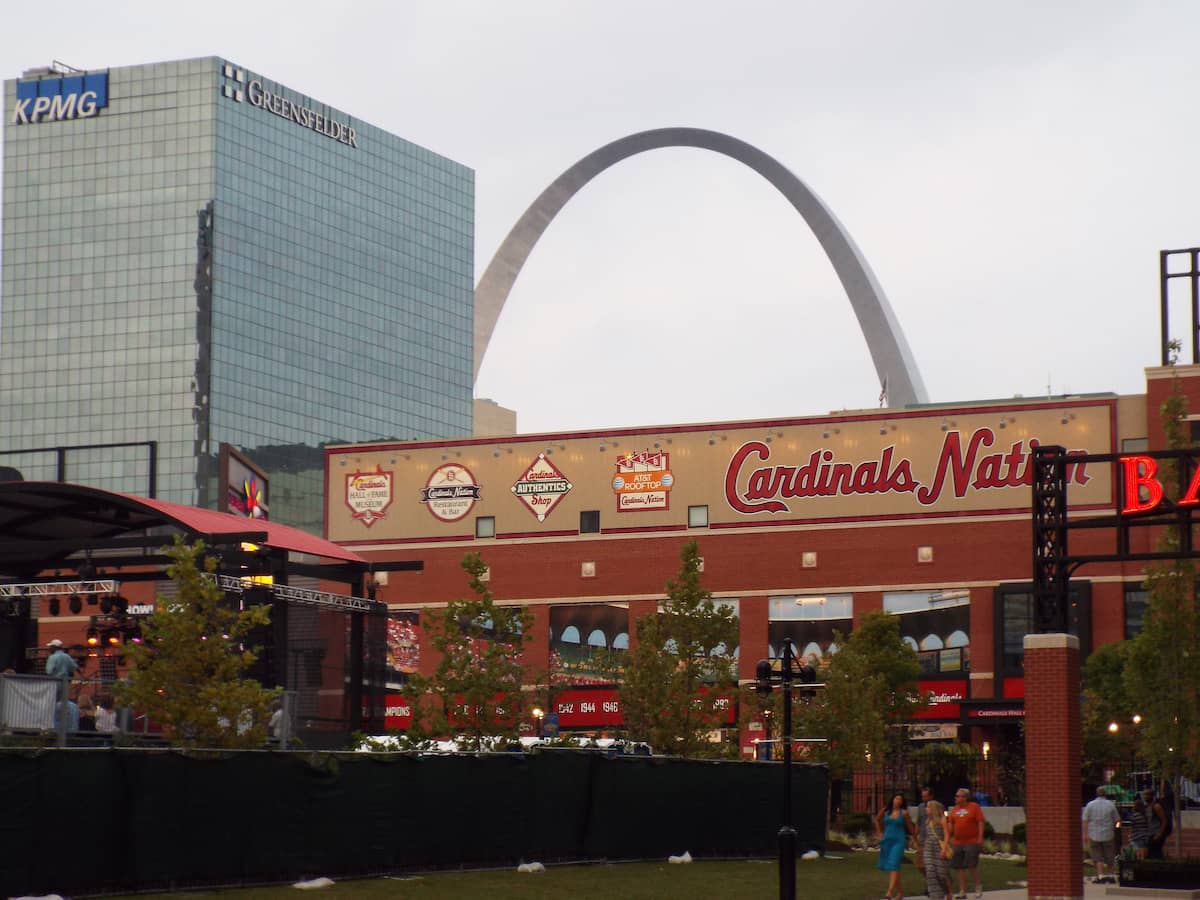 3 Comments on “Springfield to St Louis”