Another day and another iconic scene and one of the seven wonders of the world – The Grand Canyon in Arizona. After breakfast overlooking Monument Valley we stuck the go pro camera to the outside of the 4×4 and headed down into the basement of the valley to drive the 17 mile dust track around the bottom of the buttes.

It was an awesome experience, we saw so much more of the amazing rock formations and i got to drive over some real rough dust tracks in the middle of nowhere. 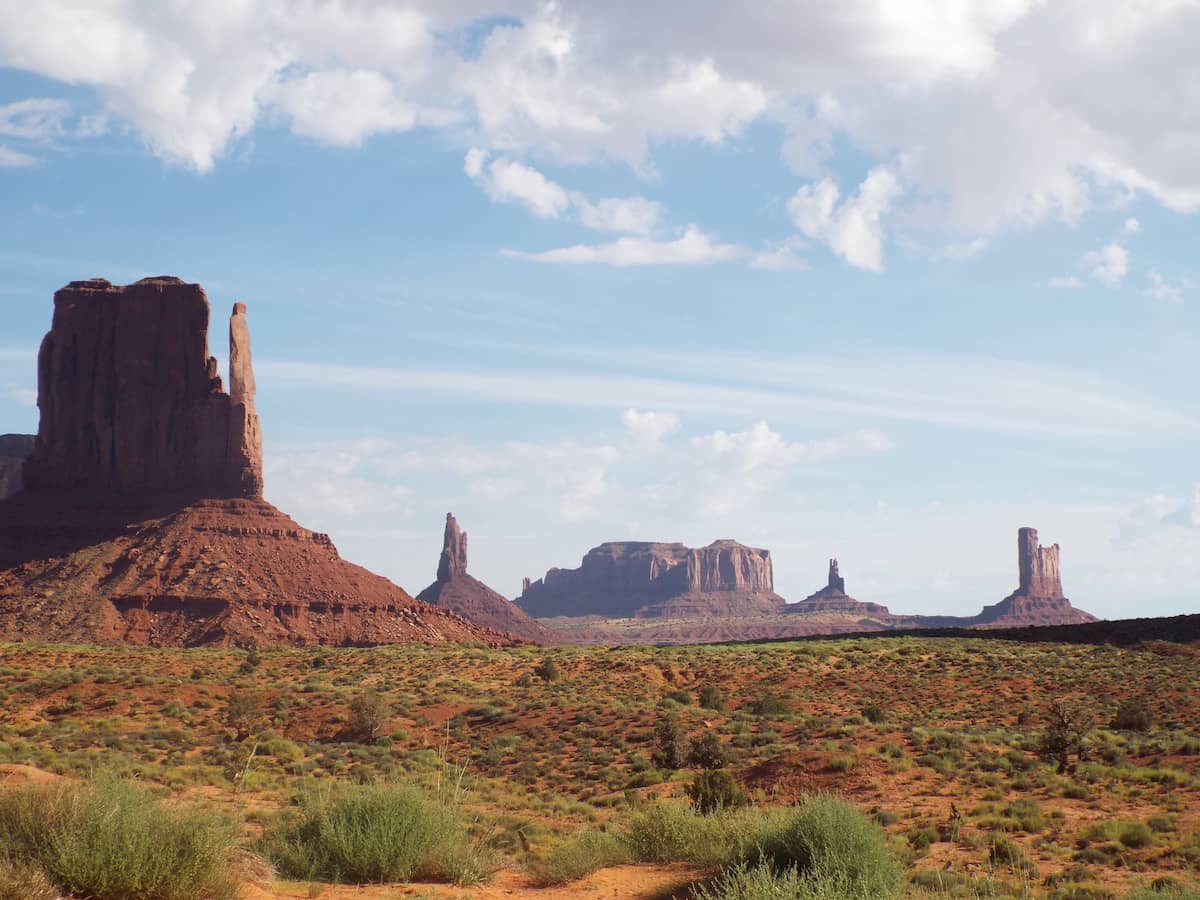 This was the second time i was rather glad we hired a genuine 4×4 as there was no way we could of done a lot of it in a standard car. Ive taken some great video footage that i’ll put up as soon as i get round to editing 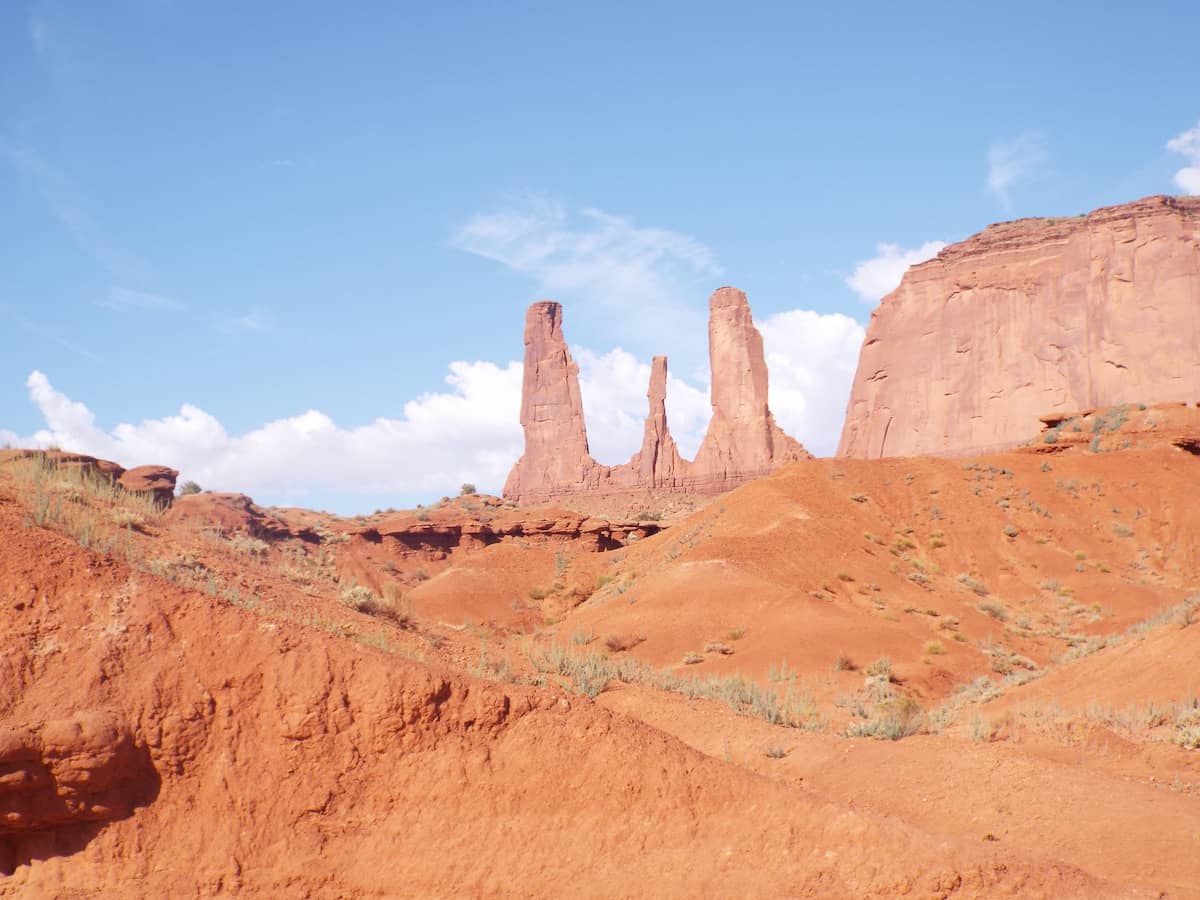 From Monument Valley we headed on to Kayenta and then onto Tuba City. It was another long day of eating up the road and i think we covered just over 220 miles. There were not many stops as we wanted to spend as much time as possible in The Grand Canyon National park but one of the must stops was just outside Tuba City to see genuine dinosaur footprints, eggs and skeletons still in situ in the Arizona desert. To be honest i was expecting this to be a bit of a theme park like affair so was quite surprised when we turned up to find a couple of wooden stalls and a few Native American guides who would show us around the site and show us the important finds for donations / tips. 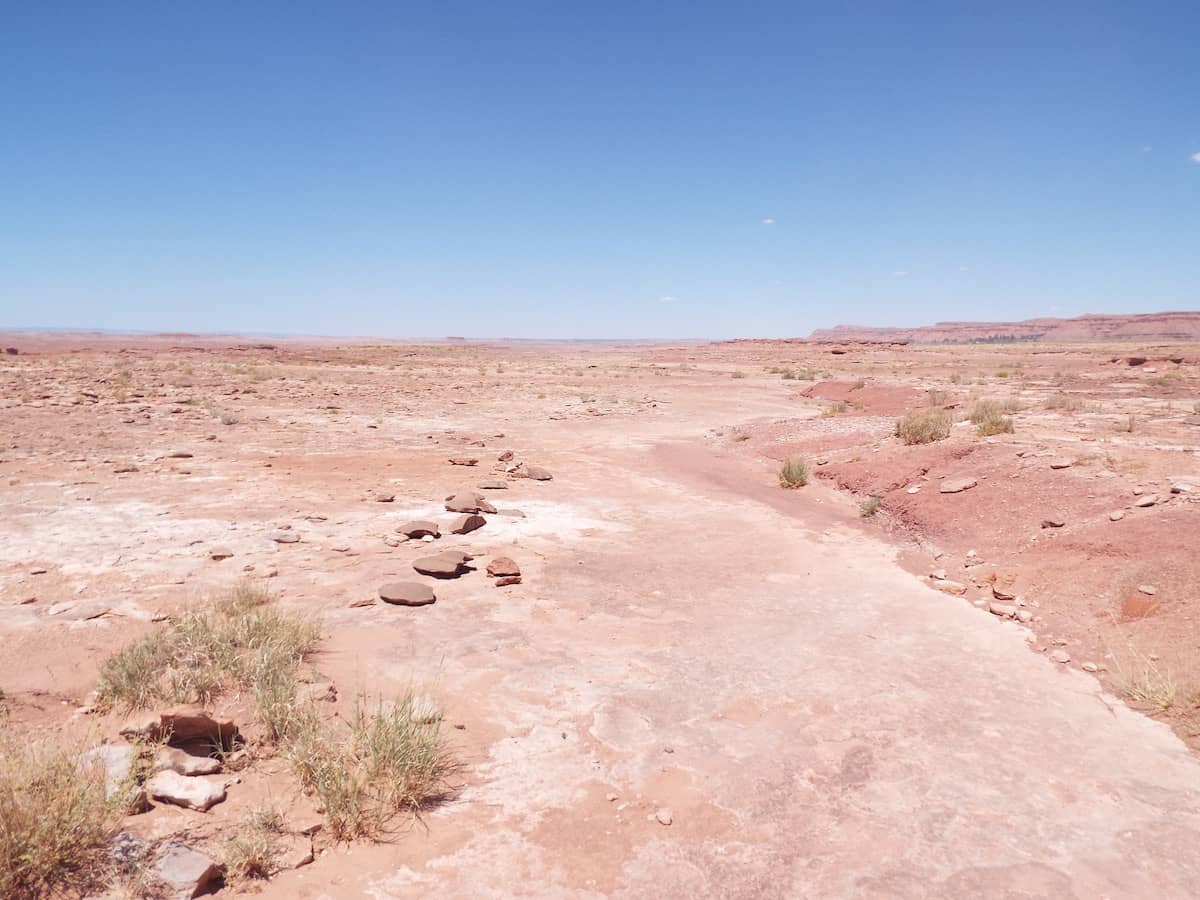 First on the agenda was a short walk out to some Velocirapter footprint which were bigger than one would of imagined, we then saw a few foot prints from larger dinosaurs (i forget the names) and i’ve got to admit at this point me and Debbie were giving each other the look of disbelief and wondering if this was actually genuine or just another money making scam. From the footprints we walked a little further to find a supposed skeleton of a baby Triceratops and then onto see some fossilised dinosaur dung and some dinosaur eggs. 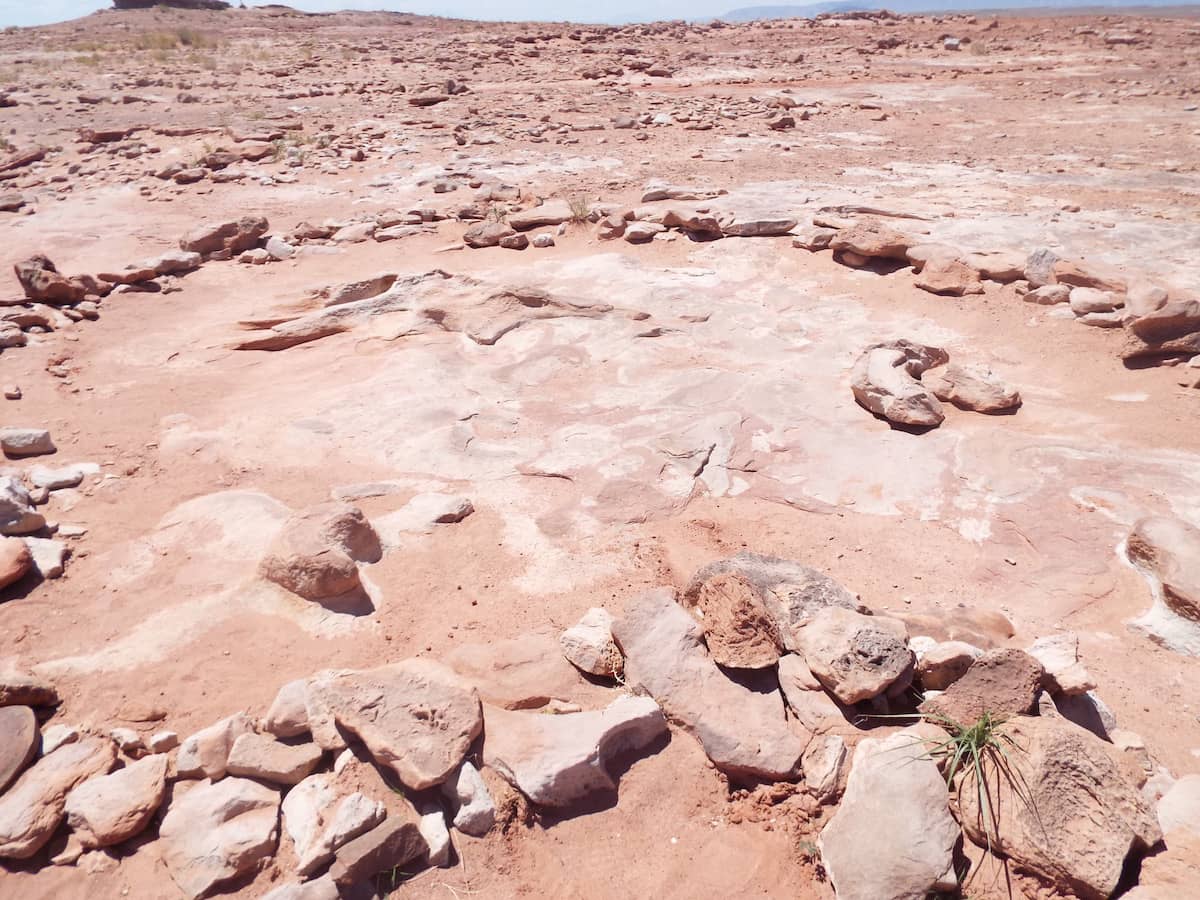 It was fascinating seeing them but i still wasn’t 100% sure on how genuine it all was. Anyway after taking lots of photographs and a good 45 minute walk round the area we tipped our guide $20, purchased a necklace made from red jasper and got back into the car and the much needed air con . Later that night i googled the site and read some other studies on the area from eminent palaeontologists and it is believed to be 100% genuine, which made it even more of an amazing stop really. 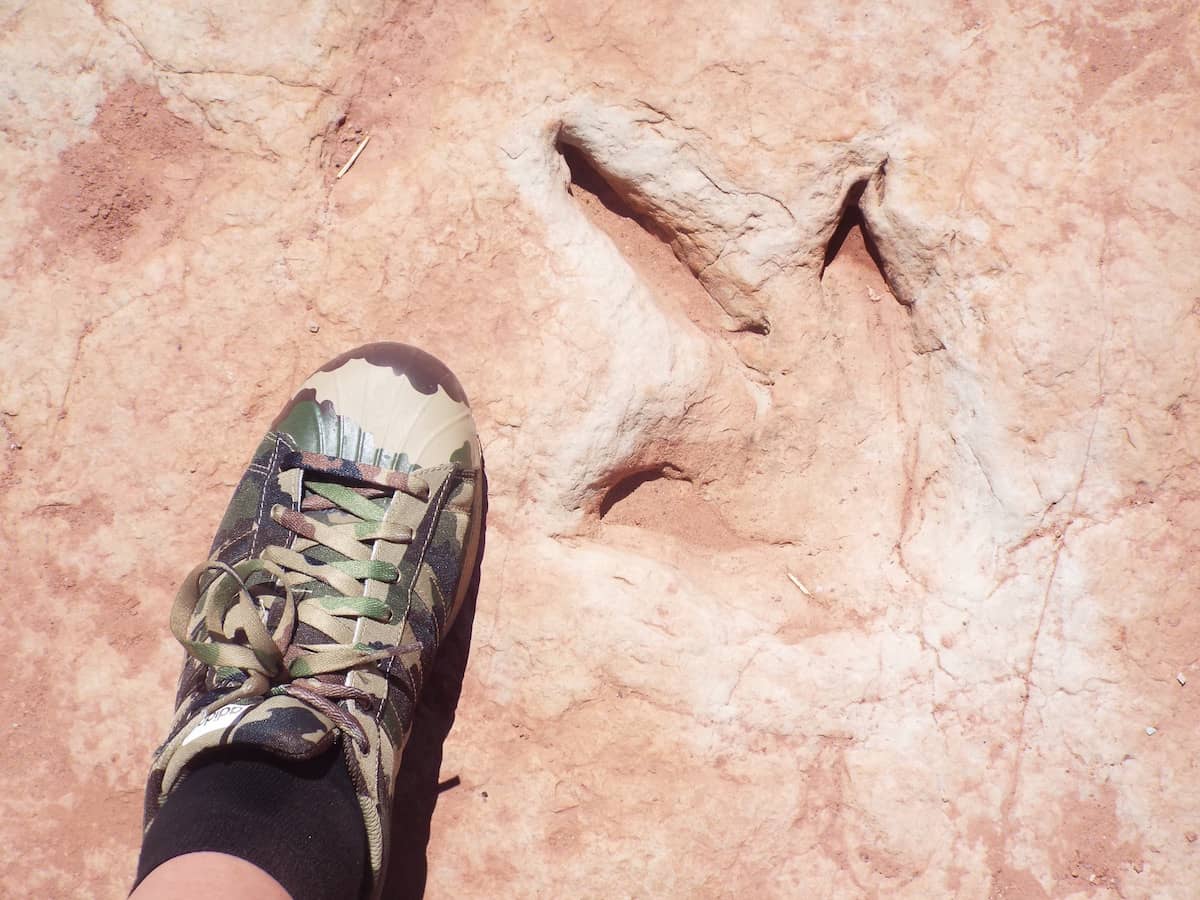 After another couple of hours driving we made it to the Grand Canyon National Park and had our first peek at the Canyon via the desert drive watchtower. I’d read it was big, and i was expecting it to be an amazing site but i wasn’t expecting it to be quite as immense as it actually was. There are holes in the ground and then there are HOLES IN THE GROUND and the Grand Canyon is even bigger ! Its the kind of hugeness that makes you think if you fell over the edge you would actually have time to write down and document the life that is flashing before you before you hit the bottom. The really weird bit was we where only looking at a small part of it at this point, there was even more so we jumped back into the car and took a slow drive down to the Grand Canyon Village stopping along the way at various viewing points which get more and more amazing as you go along. 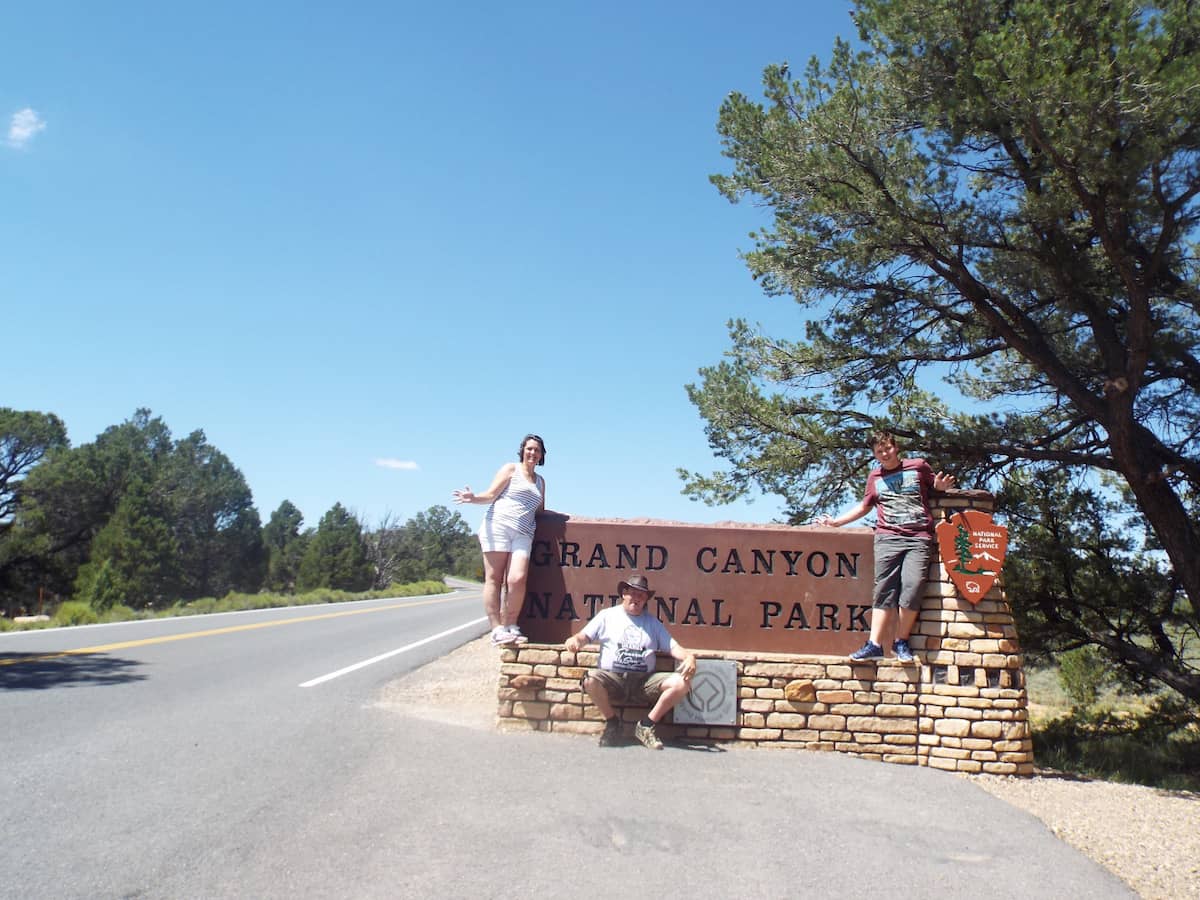 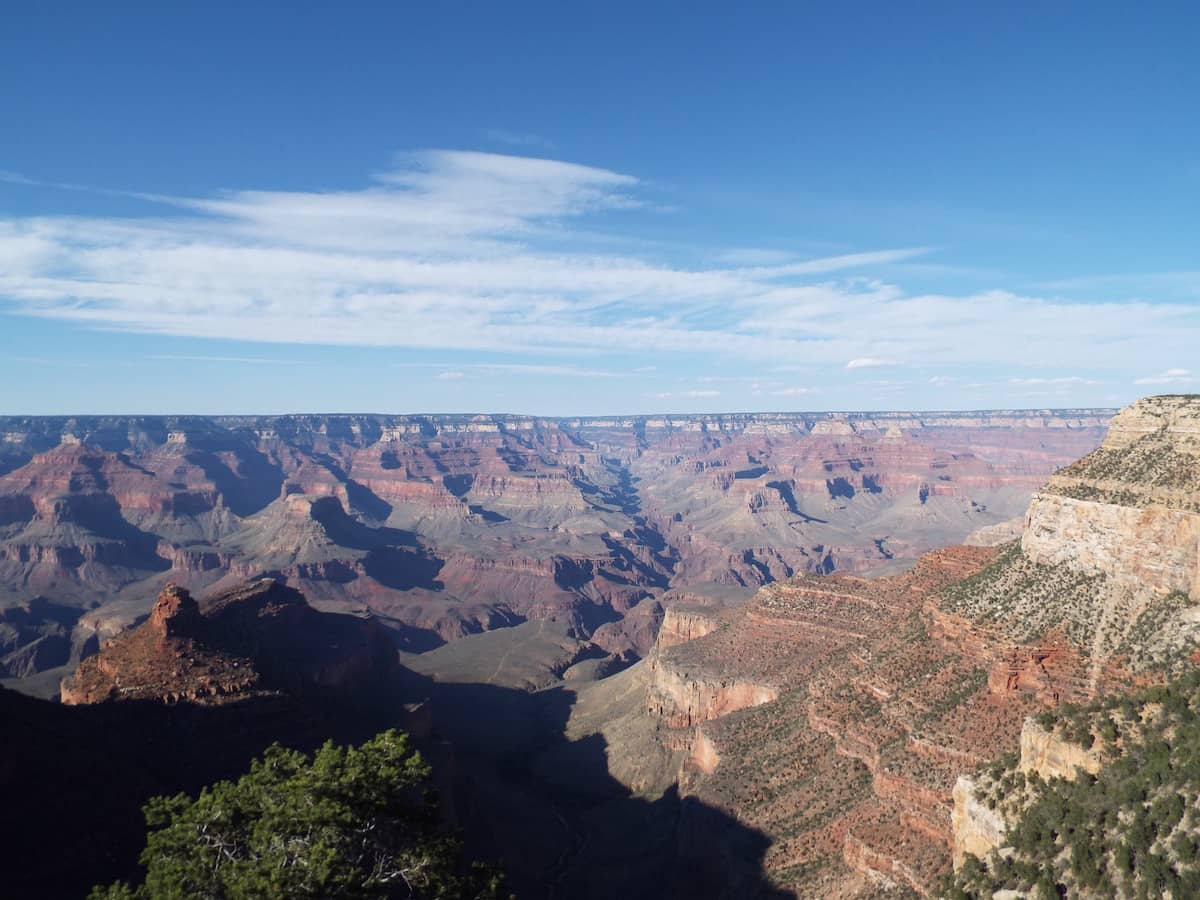 We were staying at the Kachina Lodge in the Grand Canyon Village which offered Partial Canyon Rooms. Im not sure what i was expecting but it felt pretty much like we were on a student campus. True, we did have a partial canyon view but it wasn’t one where you could take photographs or set up a time lapse as i had hoped. The view from our room consisted of a grass verge, a large footpath , a brick wall and then a small view of the other side of the Grand Canyon. It was adequate and it was close to the amenities which meant we could get dinner that evening without a trek and we were a one minute walk from being at the side of the canyon but if i was in the area again i wouldn’t chose this lodge. We had dinner that evening in the Bright Angel Restaurant which was described as a casual restaurant featuring healthy diner- style classics prepared in the Harvey House tradition. The restaurant décor features the signature colours of Mary Jane Coulter within the vibrant window-transom panes, accented by stout log columns with colourful mosaics.  The setting characterises the nostalgic and trend setting culinary facets of the Fred Harvey dining era. However i would of described it as a little bit Disney and a little bit pub grub. The food was ok, in fact it was quite tasty but it didn’t feel genuine. In fact thats my biggest gripe withe the Grand canyon Village – it all felt a little false, a little bit too touristy and a little bit Disney. The big hole in the ground was magnificent, the facilities around the edge were less than. Should we return to The Grand Canyon, which i think we will do one day, it will definitely be for a few more days and with a view to hiking into the Canyon. You can only get a glimpse from the village and i think you have to head into the Grand Canyon to really experience it. But today was only a glimpse, its something else i’ve ticked off my bucket list and i’m glad to have visited. 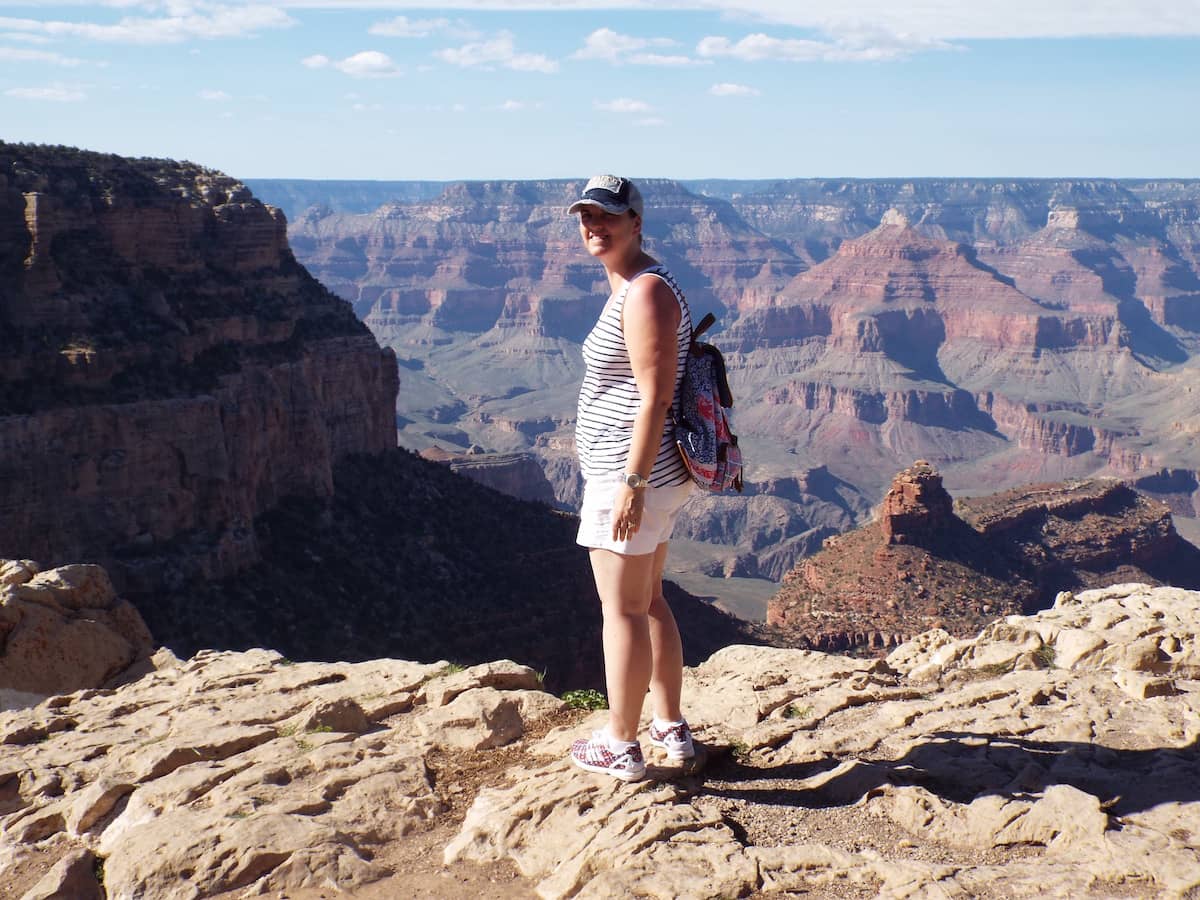 ]By 8pm it was dark, You could of been anywhere really as you couldn’t see the canyon and the darkness came in so quickly you couldn’t really experience the sunset in the same way that you could Monument Valley. We headed to be early, slightly deflated by the Village but hopeful for the coming few days which would see us heading back to old route 66 and some real must see towns and attractions.