Its been a long 24 hours of travel – bloody long !

Wednesday started at 3am with the drive up to Manchester airport. My dad kindly took us to the airport and the drive up went smoothly enough but on entering terminal 3 the brevity of the days travel suddenly sunk in. The queues for check in were huge and badly organised and the queues for security were huge and badly organised.All in all it took about an hour and a half from walking into the terminal to getting to the lounge we had booked for breakfast. Probably not a great deal of time compared with what others have told me in the past but never the less it wasn’t expected so it seemed more of a drag than it should of been. We had booked into the Sky lounge for breakfast but that wasn’t up to much either and i don’t think we would book it again at Manchester.

The view of Greenland from the plane

A rather cool “Map of USA” field from above

Eventually we were on the plane and on the first leg of the journey to Schipol airport in Amsterdam. When we were booking flights we had originally planned to fly direct with Virgin or Delta but the £2000 saving we made flying via Amsterdam with KLM swung it in the end. I cant say anything bad against KLM, both flights were smooth, we had plenty of leg room and the entertainment and food on board was fine. The only downside was the 2 hour stop over between flights and the amount of annoying kids on the second leg to San Francisco..

Schipol airport is huge so it took a good hour to walk from where the Manchester flight landed to where the San Francisco flight took off. We eventually made it though and only had 20 minutes of downtime to waste before we boarded the newest addition to KLM’s fleet, the Boeing 787 Dreamliner. The Dreamliner seats had plenty of leg room, a huge 16″ HD Entertainment system (which i didn’t really get to enjoy as i fell asleep 20 minutes into The Hatefull Eight !) and very cool large dimming windows. Compared with other flights the 787 was silent as well and very smooth. In fact, had it not been for the family behind us who didn’t understand what parental responsibility was the flight would of been fantastic, as it was by 5 hours into the flight i was a “mushroom cloud laying Muthableeper” ready to injure the darling child in the seat behind who constantly kicked the back of mine and made so much noise it was like feeding time at the zoo.

We touched down at San Fransisco airport 15 minutes early and eventually made our way into the horror that is US Immigration, the queues and mayhem at Manchester were serene in comparison ! As we had visited the States a few times in the past year we could slightly fast track the huge queues by going through the returning ESTA section but it still took a good hour and a half before we were standing out in the Californian sun awaiting our Wingz driver Absihek. Wingz is an uber like car service and the driver had already text me the day before to finalise pickup so that went smoothly enough and we were soon winging our way through rush hour traffic in a rather nice Audi Q7. The driver was extremely helpful, offering tips on thing to do and see and all in all it was good experience and one i would recommend if you need a transfer out of SFO airport.

We finally made it to Hotel Zephyr on Beach street in San Francisco at around 5pm and by this point we had been travelling for almost 22 hours so were grateful of a speedy check in. The room we have is great. Nice big TV, Free wifi, good coffee making facilities and its all nice and new, the icing on the cake though is the view which overlooks Alcatraz island 😀 The hotel itself is very quirky and modern. Some of the walls are covered in what looks like the sides of container shipping units, there is funky art everywhere, an outside patio with giant connect four and other games and its a minute walk down to Fishermans Wharf.

We haven’t done a lot this evening, just the normal rearranging of luggage and settling in. We took a walk down to Fishermans Wharf and Pier 39, had dinner at Bourdins which in usual US style was very tasty but just waaaaay too much to eat after all the travelling and returned back to the hotel for an early night. When we arrived that afternoon the weather was lovely, hot and sunny but by the time we were out wandering it had dropped quite cool and the fog was starting to roll in over the bay so was quite glad to have stuck jeans and hoody on. 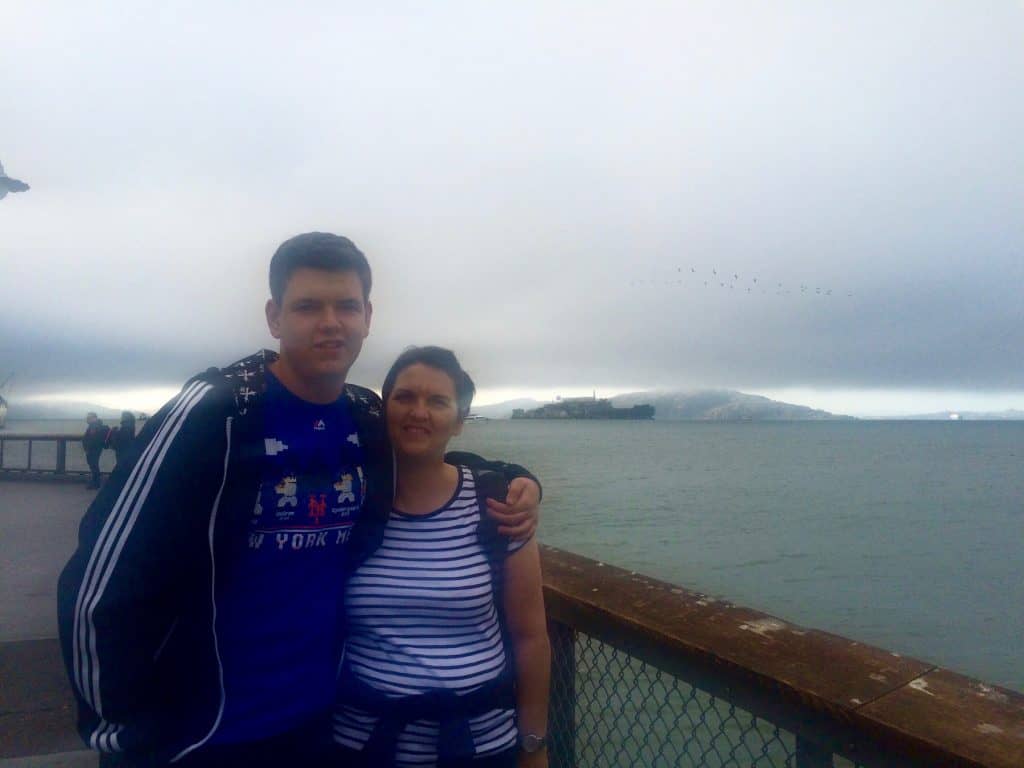 Anyway its now 7am Thursday morning so i’m going to wake the rest of the clan up and we shall toddle off to explore what the Golden City has to offer.

2 Comments on “Let the journey commence”