The road has obviously been covered in fresh tarmac recently as you can still see the original road creeping out from underneath the thick layer of black that had topped it but that didn’t make it any less breathtaking as it winded its way over the mountains.

Along the way we passed a number of settlements, some of which looked abandoned. I cant imagine its great fun living miles away from anywhere in the shadow of mountains in the desert, especially when winter sets in 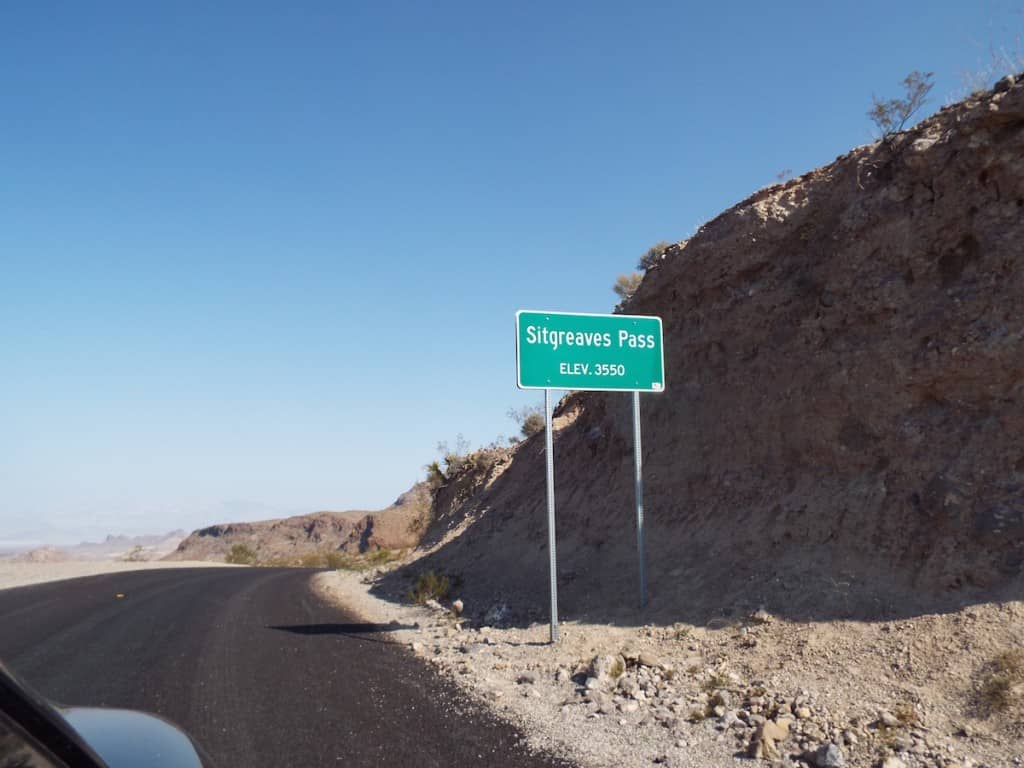 . It turns out that some of the settlements were old gas stations and restaurants which had long been left behind. As you wind back down the other side of the Black Mountains you come across a curios little town called Oatman. 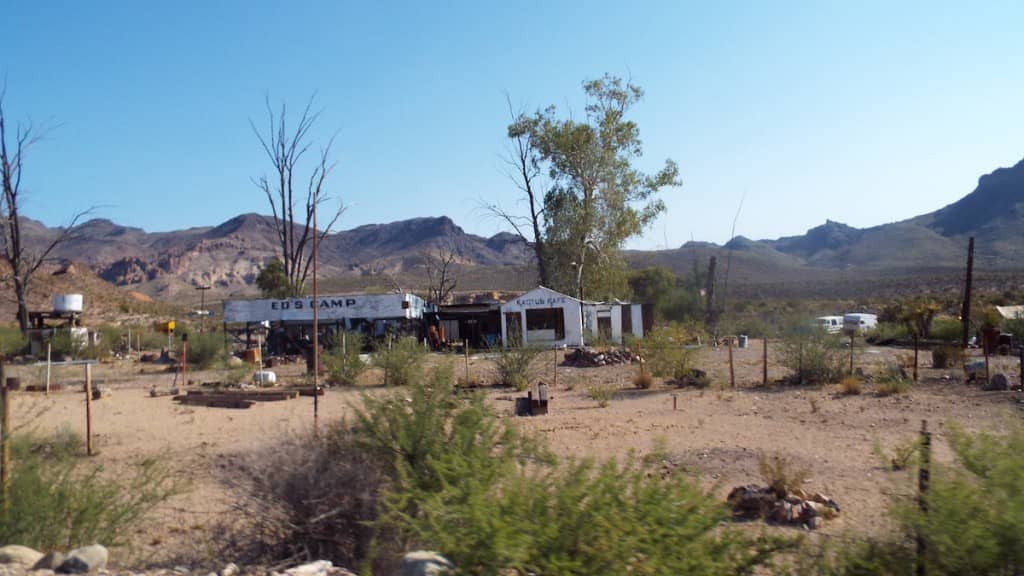 Oatman is a strange place. Yet again we arrived too early so there were only one or two shops open despite their being a heavy tourist presence already. The town is kitted out in the style of a wild west cowboy town and holds cowboy shoot outs for the tourists twice a day. Its an ex gold mining community that has seen the good times come and go and with the help of its wild burros who wander around the town at will, and are apparently descended from the donkeys that were brought to the town during the gold rush, it has recreated itself as a popular tourist attraction. Personally we didn’t think that much too it and it seemed as genuine as the wild west town created in local Derbyshire theme park The American Adventure. 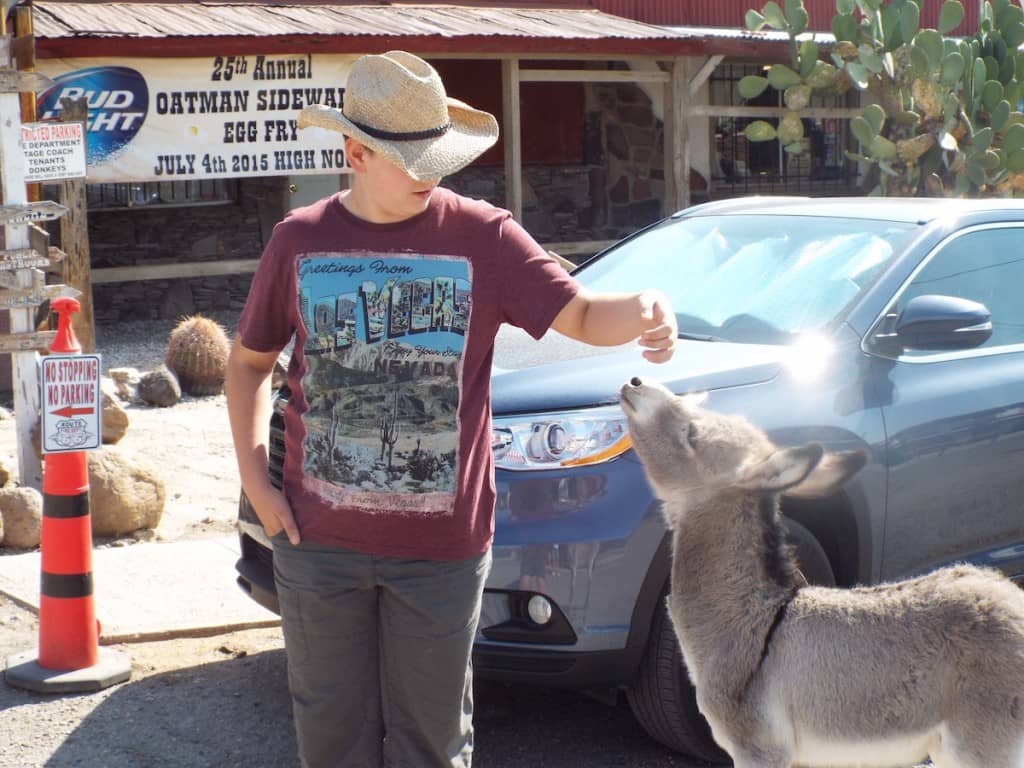 We headed out of Oatman and ate a service station breakfast of coffee and pastries overlooking the plains heading into California. The road took in lots of rocky desert, small towns and rail road depots before aligning itself with the Colorado river and heading into Needles California. We had a quick wander round Needles but we really wanted to make tracks and get to the oasis of Las Vegas. So it wasn’t too long before we were heading out on the I95 through the searing heat of the Californian desert. 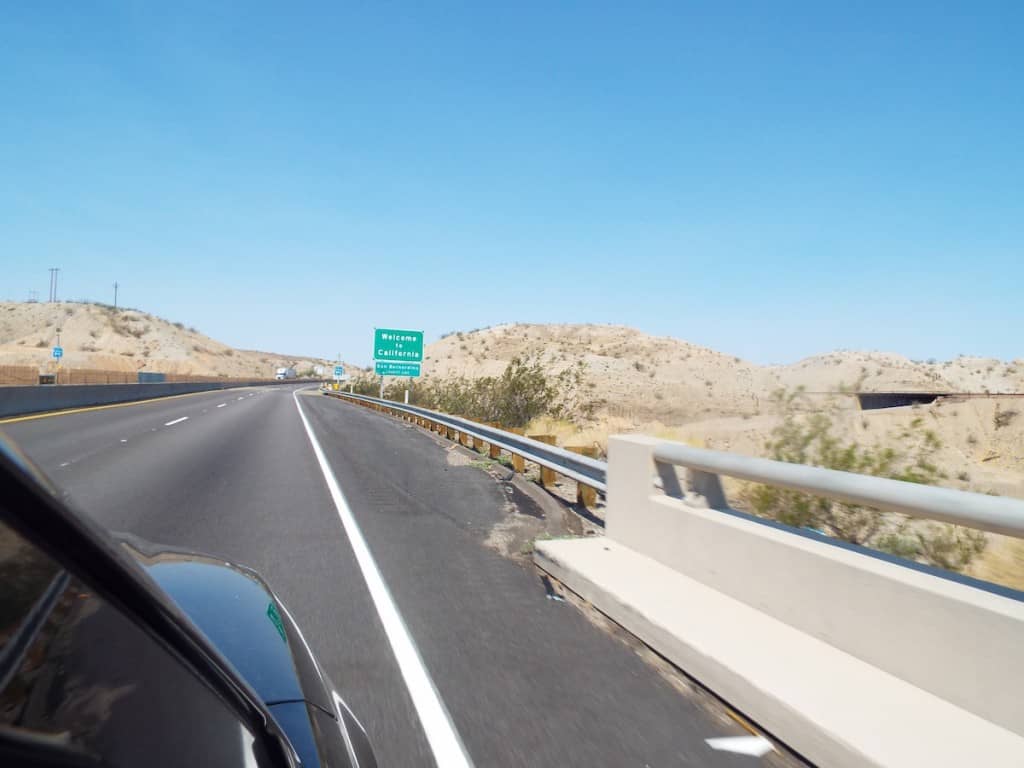 The road eventually widened out from a single carriage way to a wide dual carriageway which was about 120 miles of nothing in a straight line. It was the kind of road that made you panic when a slight bend came up as you had been driving in straight line for so long. 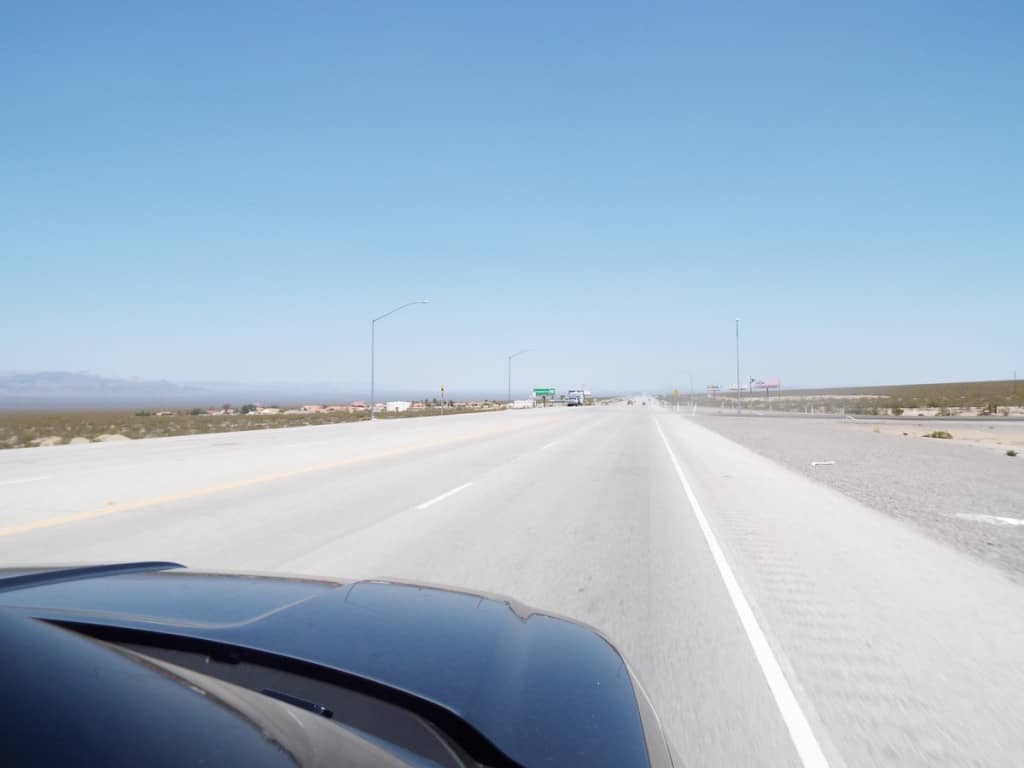 I had a romantic notion of driving along a desert road and suddenly seeing Las Vegas pop up on the horizon like an oasis in the middle of nowhere. Unfortunately the reality was not like that. You turn left off the I95 onto the Nevada Highway and from that point on your are driving on very busy roads over the top of towns and through the city of Henderson before coming off onto built up town roads which lead you into the centre of Vegas eventually.

We got Vegas at around 13:00, too early to check into our hotel so we ended up heading to one of the famed Vegas shopping outlets for some retail therapy. I don’t know what i was really expecting but the outlets were not that fabulous. The shops on average were no cheaper than the UK and the range of shops and stock was nothing to write home about. It didn’t stop me picking up a pair of trainers in the adidas store mind you and we did manage to find a pair of football boots which Oz needed for school. From the Outlet we headed the two minutes down the road to McCarran airport to drop off the car. We had decided that we would do without the car for three days whilst in vegas to save a bit of money and so we didn’t have to worry about parking. The taxi ride from the airport to Hotel New York New York took about 25 minutes and we were soon checking in to our 27th floor room with (very) partial Strip view.

The Hotel New York New York was mental and amazing at the same time. Imagine a theme park wrapped up inside a hotel and you’r getting the idea. The middle of it was just a sea of gaming machines with black jack, poker, roulette and craps tabled everywhere and the around the outside there were loads of restaurants and shops designed to look like they were on streets. It had a mini Times square complete with huge neon advertising bill boards, it had a 1950s broadway street lined with cafes and so on and so forth. Outside was just as mad with the hotels main towers being designed to look like famous New York landmarks such as the Chrysler Building, The Empire State and the Rockafella etc. It even has its own statue of liberty and Brooklyn bridge.

We grabbed some dinner in one of the hotel restaurants and then went for a wander round local part of the LAs Vegas strip. Across one bridge from NY NY was Excalibur, a hotel themed like olde worlde England complete with castle turrets and Knights in shining armour and across the other was the MGM Grand. We headed over to the Grand, had a brief look around ( more gaming machines but in an elegant environments) and headed out onto Las vegas Boulevard where we walked down to the Bellagio to see the fountains and had a wander round the Miracle Mile of shops within the Planet Hollywood Casino.  The shops were not up too much but the mall was designed like streets with the roof having its own weather show complete with thunder, lightening and rain. You will see what i mean when i finally get round to sorting out the videos i took, they illustrate Vegas much better than i can describe it. 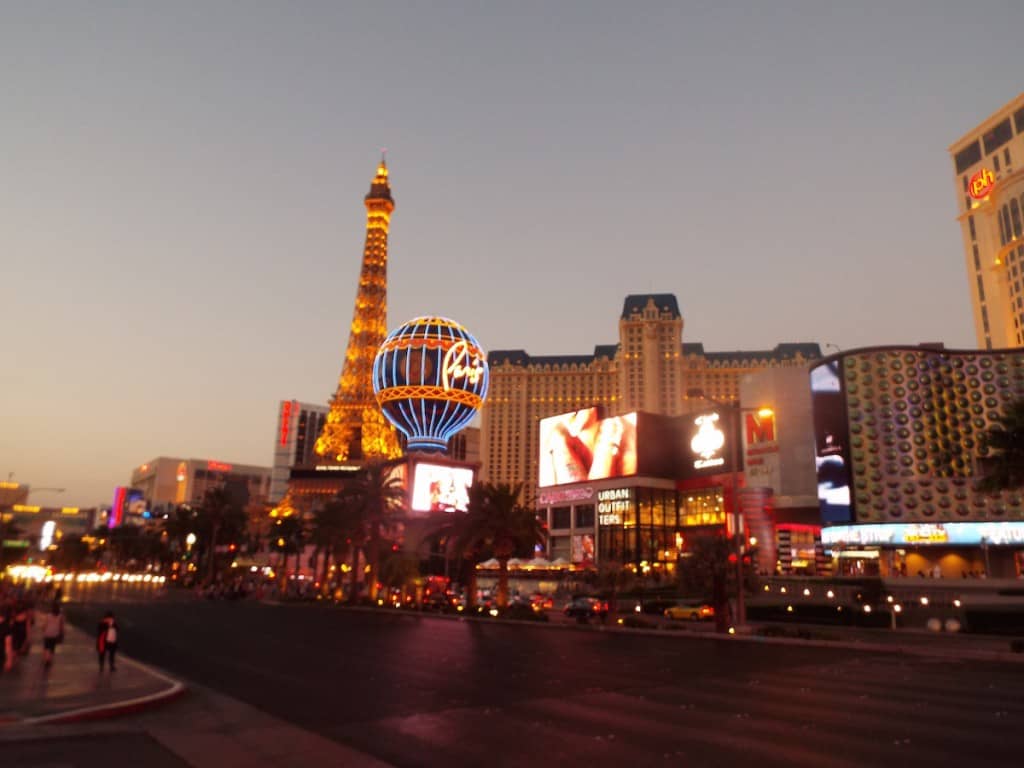 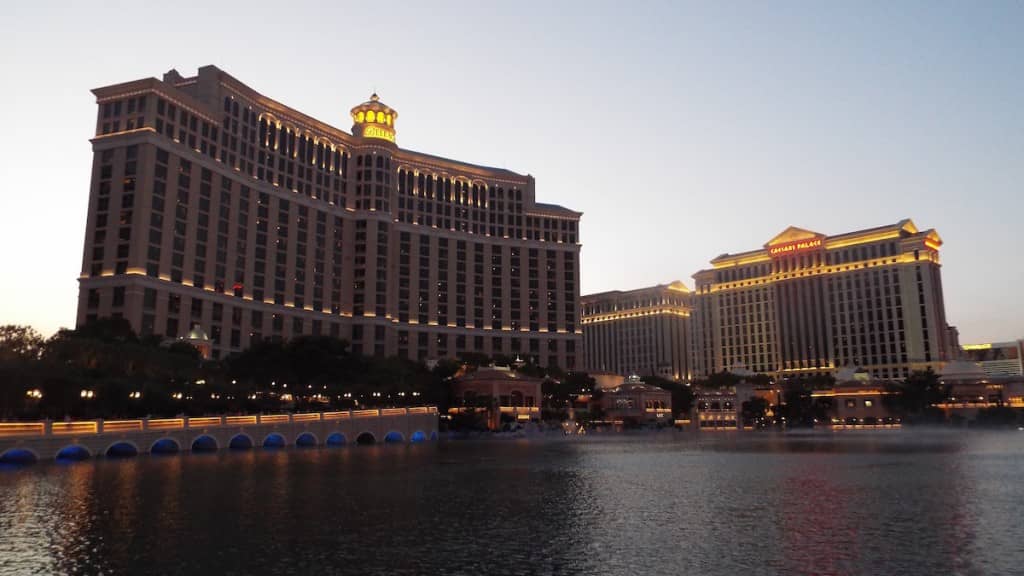 ]By this time it was getting late and we were absolutely knackered so we headed back to the hotel, grabbed some coffees, wasted a couple of dollars in slot machines and went to bed looking forward to tomorrows day of exploring the hotels in greater detail.