Our first day on the route 66 in Illinois was an eventful one. Firstly the taxi driver taking us back to O’Hare airport to pick up the hire car spoke very little English and didn’t have much of a clue where he was going.

After finally finding the Alamo offices and settling into our huge top of the range Ford Explorer we got completely lost on the airport roads, ended up on Toll roads that only excepted coins ( with no coins in our pockets) and generally drove around Illinois neighborhood’s  like headless chickens for two hours trying to avoid closed highways and roads left right and centre. We eventually found our way to Ogden Avenue about 6 miles outside of Chicago and the journey begun in earnest – what lay ahead was almost 2448 miles of open road and Route 66. 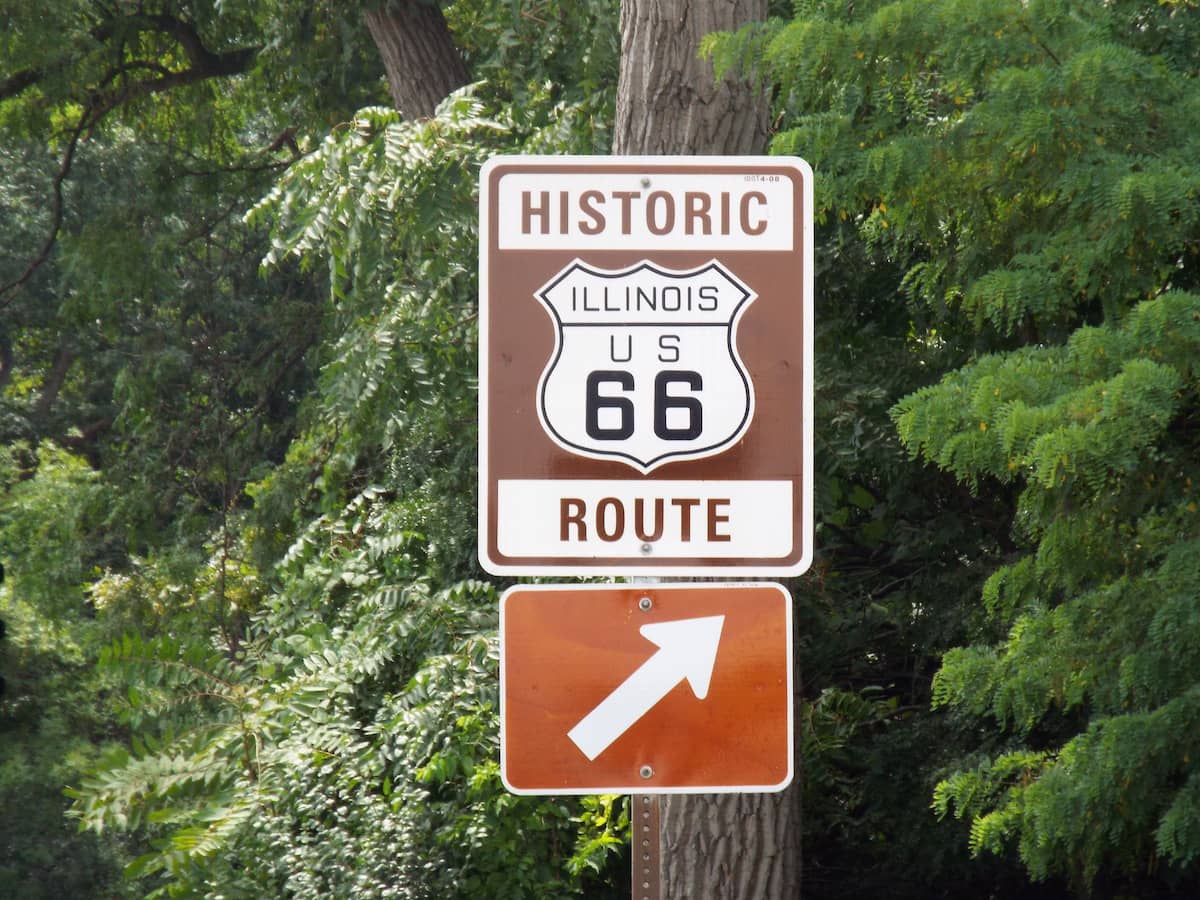 Fortunately the historic route 66 highways shield are very prominent in Illinois so sticking to the route was relatively easy and we only took a wrong turn a couple of times and managed to get back on to 66 quickly each time.

The highlights of the day included seeing our first Gemini Giant at the no longer open Launching pad cafe; a rather excellent root beer and chilli dog at the Polk-a-Dot Drive in ( exactly what you would expect of a 1950s style diner – lots of chrome, tabletop juke boxes and proper booths); Driving through Joliet and seeing the prison from the Blues Brothers film, plenty of classic American muscle cars and lots lots more. 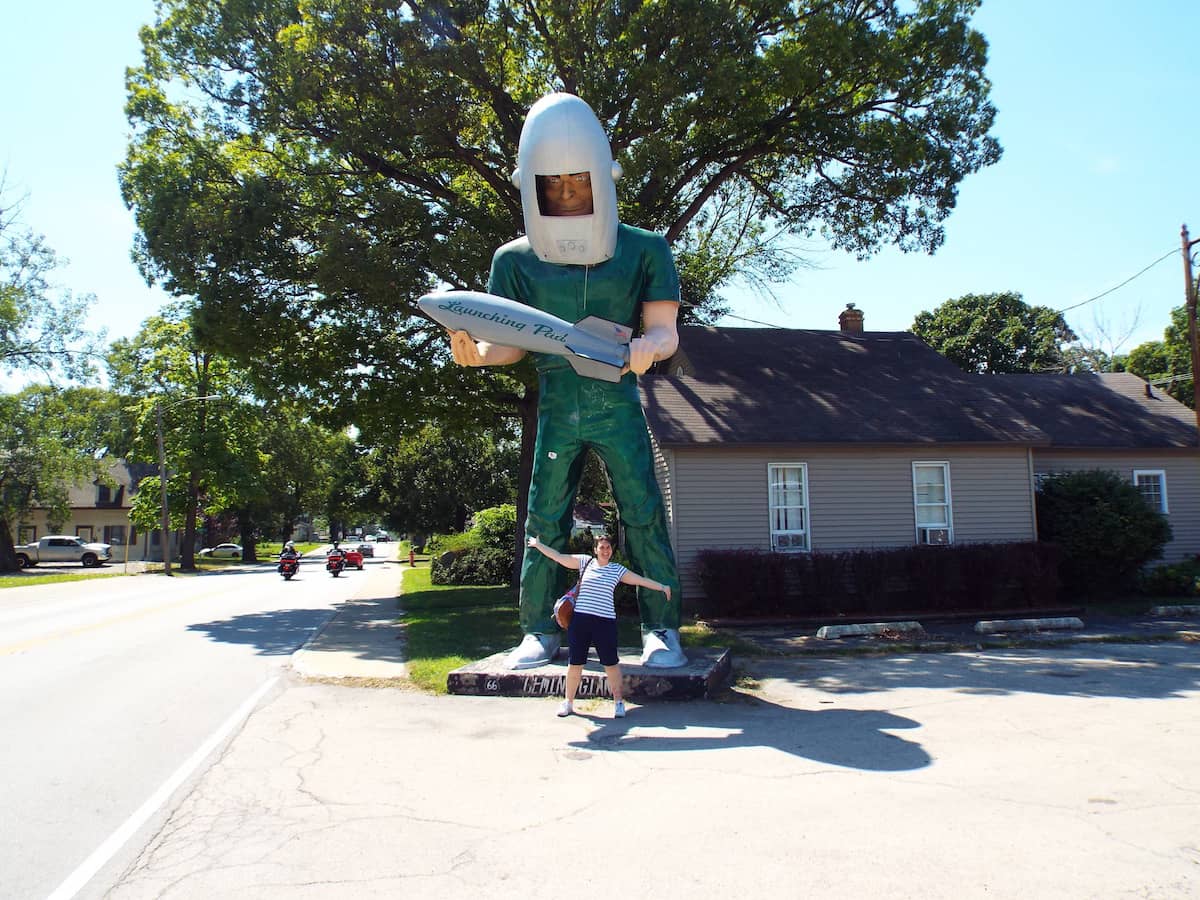 A particular highlight in the first part of Illinois route 66 was being welcomed into the town of Pontiac by the local Mayor who just happened to be in the vicinity. Pontiac is the home to lots of route 66 murals, an excellent museum and Bob Waldmires road boat ! Bob was the hippy who Fillmore from the film Cars was based upon and though he is now dead he obviously left a lasting impression on the town as they now house his converted hippy mobile – a big yellow school bus with various wooden bits nailed on to make a sleeping quarter, kitchen, shower etc. It truly is a site to behold. 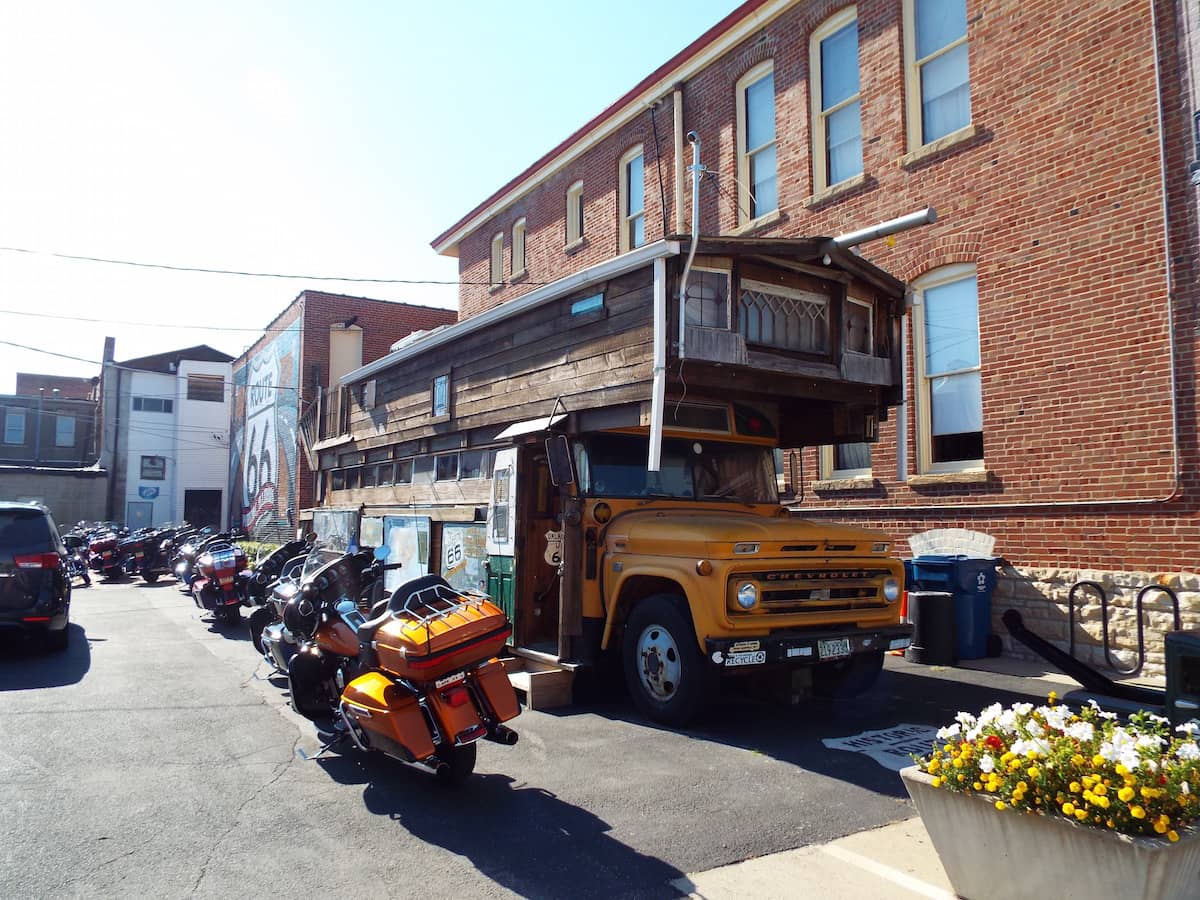 Other notable places we visited today were Amblers Texaco Service Station in Dwight where oz got to sit in an original Ford Model T fire engine and Standard Oil Gas Station in Odell.

Unfortunately due to the late start and lack of knowledge of the American roads we were soon well behind schedule so had to hit the free way to make it to Springfield in time for dinner.

That night was spent drinking beer, eating BIG burgers and chatting to a couple of Americans till the early hours about the differences between our two countries. Springfield is strange (i’ll cover that tomorrow) but the night was made special with the friendliness shown and if this is a sign of what the rest of the route will be like we will have an amazing time 😀

Anyway, im rambling and i need my bed so ill leave yo with the following gallery of some of the sights we have seen on our drive to Springfield They are unedited, and a few were taken from the car whilst driving but enjoy .